An Indian Corner in Jerusalem 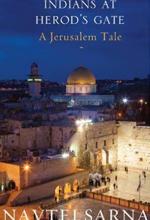 “You are in India now,” said Nazeer Ansari as he welcomed Navtej Sarna, India’s ambassador to Israel, to the Indian Hospice just inside Herod’s Gate in Jerusalem’s Old City. The Indian flag flutters over the entrance, and as tea is served in the lemon- scented courtyard and Sarna talks with Nazeer’s father and head of the hospice, Shaykh Munir, a “Jerusalem tale” begins. It is an engaging story replete with Indian saints and soldiers, Indian pilgrims and princes, and a Jerusalem Indian-Palestinian family that has kept an “Indian corner” alive in Jerusalem through wars, conquests, and occupation.

Although the story of the hospice stretches through many centuries, the family’s own Jerusalem connection commenced in October 1923 when Haj Amin al-Husayni, mufti of Jerusalem and president of the newly-formed Supreme Muslim Council, dispatched a delegation to India. A key mission was to raise money from wealthy Muslim princes there for the mufti’s restoration program on al-Haram al-Sharif, as well as to meet, and perhaps to make common cause, with leaders of the All India Khilafat Committee who called for another restoration – that of the Islamic caliphate. As Sarna recounts in his fascinating and elegant book, the delegation also mentioned that “there was an Indian property in Jerusalem, an old Indian hospice in a state of disrepair.” When the Khilafat leaders asked one of their activists – Nazir Hasan Ansari of Saharanpur – to go to Jerusalem, he felt ready, prompted by a strange dream of a “big place, a place with a tomb.”

That place was the Indian Hospice and the tomb perhaps the underground meditation room of Baba Farid, a thirteenth- century Sufi mystic and a great traveller who arrived in Jerusalem after Saladin had opened the city to Sufis and built khanqahs to host them. In that dark underground chamber, it is said, Baba Farid fasted and meditated, which included hanging upside down in a dark room for forty days. As Sarna probes the accounts of other travellers and, with the help of Nazeer Ansari, serendipitously discovers Ottoman-era property records from the shari‘a court, he finds – “like doves carrying little messages” – traces of Indian pilgrims and variations of the Indian Hospice in several locations in the Old City. The indispensible Ottoman Turkish traveller Evliya Çelebi, for example, writing in the seventeenth century, observes, “The portico at the Gate of Mary, which looks north, is the abode of Indians.”

What has happened to the Indian connection with Jerusalem over these long centuries and what role has the Indian Hospice played? Shaykh Nazir himself became a member of the Supreme Muslim Council in Palestine, and concluded a new marriage to a devout Palestinian woman from the Dajani family, arranged by the Mufti himself. His relationship with the Mufti would become more than strained in the wake of the Arab Revolt and Shaykh Nazir’s gravitation to the Mufti’s rivals, the Nashashibis. At one point the shaykh had to hastily catch a boat from Haifa for a brief trip to India to avoid assassination. Sarna provides a tantalizing glimpse into the pan-Islamic politics resonating in Palestine in the Mandate years, when the Indian Khilafat Committee visited Palestine in 1934 to mobilize support for the election of the Nizar of Hyderabad – reputedly the richest man in the world – as Caliph of Islam. The Mufti was opposed; the Nashashibis were sympathetic. Sarna concludes: “The sheikh from Saharanpur was holding up the Indian flag in the midst of very murky waters indeed.”

In the same year, the Palestinian Indian Association, meeting at the hospice, declared its loyalty to the British Empire, another reason for a rift with the Mufti. Unfortunately, Sarna’s discussions with the Ansaris do not touch on the hospice family’s attitudes during the Indian independence struggle, although photos of Gandhi and Nehru have pride of place on the hospice walls. During World War II, the hospice cooperated fully with the British army, serving as a hostel for Indian troops housed in two wings newly built by British soldiers and serving what one Indian soldier described with relief as a “good Indian meal.” (Sheep for Muslim soldiers were slaughtered inside the hospice and for Hindus and Christians outside the premises.) One of these wings was used immediately after 1948 by the Red Cross, and then UNRWA, to house Palestinian refugees and continues to this day to serve as an UNRWA clinic. Clearly, neither the building nor the family were or are immune from the twists and turns of the Palestinian story.

While weaving his own wanderings in Jerusalem into his narrative, Sarna also provides vignettes of other Indian visitors to the city – from Indian police in the Mandate charged with searching Arab women to Indian pilgrims of Jordanian-era Jerusalem (on their way to Mecca), skillfully catered for by Shaykh Nazir’s second wife and widow, herself Indian, who became one of Jerusalem’s most popular tourist guides. Shaykh Munir, who took over the hospice after his father’s death in 1951, provides an important and poignant eyewitness account of Israel’s shelling of the Muslim Quarter of the Old City in 1967 on the third day of the war – after Jordanian soldiers had fled and a handful of local residents had armed themselves. Although several accounts of the war – notably Abdullah Schleiffer’s early account in The Fall of Jerusalem and Jeremy Bowen’s Six Days – do note the bombing of the Old City. (It is tellingly absent from Israeli historian Tom Segev’s widely-read 1967, revealing as Segev’s account is of Israeli decision-making and debates over the military conquest of the city.) But none of the existing accounts have the immediacy of Shaykh Munir’s description of shells raining down on the hospice, as eighteen members of his family hid in a single room. When a bomb hits the roof, Shaykh Munir, burnt and bleeding, emerges to a devastating scene.

My wife was hit in the stomach, Najam was hit in the leg, Mariam too was hit in the stomach. My sister, Amina, was dead – she was only twenty-eight – and so was her eight-year-old son. My mother too, dead. They were the only ones left in that room. I went back and then I heard a little moan. I touched my mother, thinking she may still be alive. “Mama,” I said, but she was no more. In her lap, was this Nazeer, safe and sound.

The fate of the hospice and its inhabitants were thus inextricably tied to the public events and catastrophes befalling Arab Jerusalem, and deepened by intermarriage with Palestinians as well. Yet Sarna insists that their story remains an Indian tale, interwoven with Indian presence in Jerusalem for many centuries and with a living contemporary Indian-Palestinian connection. “That is why I am chased by snatches of Hindi songs and that is why a toothless wizened old lady with a nose ring tugged at my sleeve near the ribat of the Africans and asked me if I knew Amitabh Bachchan.”

Sarna does not explore – or indeed allude to – his experience as India’s ambassador to Israel in years (2008–2012) marked by a very different kind of tie – growing Indian-Israeli military and economic relations and an ideological and political realignment in India as the Hindu Right rises to power with its anti-Muslim passions and positions. Perhaps this is not his remit in this delicate and personal memoir of encounters in Jerusalem, let alone in his diplomatic brief. It is, however, one of the main subjects addressed in From India to Palestine: Essays in Solidarity, where an array of Indian writers – poets, scholars, and activists – address the dramatic shifts in official India’s relation to Israel and Palestine, as well as their own personal experiences in visits to Palestine.

As Pabir Purkayastha writes, the restoration of diplomatic relations between India and Israel in 1992, and the subsequent signing of the Oslo accords, led to extensive Israeli arms sales to India with India accounting for about 50 percent of Israeli arms exports: “India has bought more than US$10 billion weapons from Israel since 1999; not only is India the biggest customer, but it has also bought more arms than Israel’s own armed forces.” India’s military ties with Israel, Purkayastha observes, brings in its wake the corruption endemic to arms deals, but also is accompanied by a more complex political realignment: “Today we see India moving away from its anti-colonial positions, effectively supporting Israeli apartheid.” While many in the Indian political establishment would bristle at this statement, writers in this volume offer careful analysis of, for example, Indian positions on Israel’s serial assaults on Gaza that certainly indicate that support for Palestinian rights has become quite muted. A. K. Ramakrishnan’s exploration of Gandhi’s questioning of the Zionist project and Nayantara Sahgal’s assessment of “Nehru and Palestine” widen the historical lens and remind us that India recommended a federal state in Palestine in 1947 and voted against partition.

Githa Hariharan remembers her first official passport at the age of twelve, stamped “valid for travel to all countries except Israel and South Africa.” Today, Hariharan cites an “amnesia” surrounding the question of Palestine and links it to a similar forgetting of all the ideals of “self-determination and anti-colonialism, our legacies from the Indian freedom struggle.” Both, she opines, “seem to have been put in cold storage. Occasional lip-service to the Palestinian to the Palestinian cause continues, like an old habit no one pays attention to.”

The veteran Marxist critic Aijaz Ahmed – generally not the most optimistic of spirits – nonetheless finds the “residual solidarity” of millions of ordinary Indians a potential resource in new mobilizations supporting Palestine – a cause he continues to believe is “the supreme struggle of our time.” However, he makes an acute and disturbing observation:

. . Another way of putting it is this: We know what “the Palestinian cause” is but we no longer know just what is meant by the “Palestinian National Movement.”

While Aijaz Ahmed utters an uncomfortable truth and a challenge to Palestinians (or at least to official Palestine) the writers who offer personal accounts of their visits to Palestine register Ahmed’s other truth, perhaps equally uncomfortable in quite another way, that “everyday Palestinians” are the “heroes of our times.” Ritu Menon, Githa Hariharan, Sunaina Maira, Nivedita Menon, Aditya Nigam, and Meena Alexander all visited Palestine in the last five or six years – several as guests of the Palestine Festival of Literature – and all offer vivid encounters and acute observations. In a lyrical contribution, Meena Alexander describes her stay at the Indian Hospice in 2011, when she was Poet in Residence at al-Quds University, and Najam, Shaykh Munir’s daughter, showed Alexander the wound on her foot from the 1967 shelling of the hospice. (The doctors wanted to amputate but Amina’s mother forbade it: “Why do I need a girl without a foot?”) Alexander wrote the poem “Impossible Grace” a few days after she arrived at the Indian Hospice, staying “right next to the hole” where Baba Farid meditated for forty days. She evokes the gates of Jerusalem beginning with Herod’s Gate and joyfully concluding with “impossible grace” at the Golden Gate. But she honors both grace and its impossibility in Jerusalem, as she writes:

Love, I was forced to approach you Through Dung Gate

My hands the color

Of the broken houses of Silwan

Another poem of Alexander’s, “Indian Hospice,” opens Sarna’s book. But an even more compelling link between these two diverse books is that both open a neglected “gate,” the on-going story of India and Palestine.