Judis: Genesis: Truman, American Jews, and the Origins of the Arab/Israeli Conflict 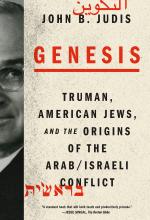 John Judis has written a major study of the circumstances surrounding the founding of Israel that goes far beyond the parameters suggested by the book’s title. Part 1 deals with the origins of Zionism, World War I, the Balfour Declaration and its implications, and the origins of the British Mandate. Part 2 turns to “The Paradox of American Zionism,” as it initially emerged under the auspices of Supreme Court Justice Louis Brandeis and then confronted the more militant political Zionism embodied by Rabbi Abba Hillel Silver. Only then do we turn to the Truman administration as it confronted the legacy of World War II, the Holocaust, and calls for a Jewish state in Palestine set against Palestinian resistance and initial British hopes of retaining possession of the area.

Judis identifies with binationalism, the Zionist movement associated with Judah Magnes, Martin Buber, and Henrietta Szold. Zionist binationalism, never a potent force, backed a Jewish presence in Palestine but called for recognizing Palestinian rights as well. When discussing the period 1947–48, Judis supports a revised partition plan that would have given Palestinians more territory than allotted by the 1947 United Nations (UN) plan. Although various Arab League countries and some Palestinian leaders were willing to entertain such ideas, Grand Mufti Haj Amin al-Husayni’s influence still prevailed among Palestinians, and Arab leaders mistrusted each other’s intentions; thus they rejected any compromise. In his analysis of the differences between liberal Zionism, as embodied by Brandeis and Rabbi Stephen Wise, and militant American Zionism, Judis evaluates them with respect to their approaches to the American public and politicians. Neither camp considered the Palestinians as having any rights; Palestinians were equivalent to American Indians, inferior peoples whose concerns were minimal when compared to those of whites. Judis indicts American liberal Zionists on this matter, accusing them of having a double standard where concern for the less fortunate could apply in Western countries but not to non-Westerners.

Judis’s detailed treatment of American Zionist debates and factional disputes is itself a contribution to scholarship, especially for those who have concentrated more on American policies on Palestine and Zionism from the perspective of presidential declarations and State Department documents. He has mined archival sources, notably the Truman Library, the American Jewish Historical Society, private papers of many involved in these deliberations, and the Central Zionist Archives in Israel, along with the work of earlier scholars, occasionally with insights new to this reviewer. In discussing the 1948 wars before and after Israel’s creation, Judis relies on Benny Morris’s 1948: A History of the First Arab-Israeli War (Yale University Press, 2008) where he notes (see p. 404n67) that many of the sources Morris used in the Israeli State Archives are no longer available to researchers.

This research also leads to a more trenchant and nuanced assessment of Pres. Harry S. Truman than that found in other studies of the period, including Michael J. Cohen’s Truman and Israel (University of California Press, 1990) which Judis frequently cites. Truman, for Judis, did not accept the idea that an independent Jewish state should exist in part or all of Palestine. He considered this idea detrimental to American interests, which included but were not limited to oil, on the grounds of both regional stability and with respect to Cold War issues that were clearly emerging in 1947. Instead, he believed in a federated Palestine as proposed by the Morrison- Grady plan of 1946, a plan strongly opposed by Silver and the Zionists. Statehood was everything to them, with David Ben-Gurion letting it be known that he would accept partition if necessary though he and most Zionists in Palestine preferred statehood in all of Palestine. Judis later presents Ben-Gurion in fall 1948 as proposing Israel take over the West Bank but being narrowly outvoted by his cabinet; Ben-Gurion would suggest the same idea to British and French officials on the eve of the Suez assaults on Egypt in October 1956.

Truman, however, invariably caved in to American Jewish lobbying, often inspired and directed by the Jewish Agency; Moshe Shertok (later to be Moshe Sharett, first foreign minister and second prime minister of Israel) was frequently in Washington consulting with American Zionists as to what steps should be taken to lobby Truman. Judis details how Truman’s capitulations to such pressures were accompanied by bitter complaints about such lobbying. His sudden changes of direction left State Department and military advisors stunned. Additionally, the British government felt a sense of betrayal, notably when Truman announced on Yom Kippur, 1946, that he approved the transfer of 100,000 Jewish refugees to Palestine without consulting London, thus endangering the very Morrison-Grady plan he supposedly favored. He did this because of upcoming congressional elections in November of that year. Judis argues that Truman’s belated encouragement of American pressure to help pass the UN partition plan in November 1947 was taken on the recommendation of advisors such as David Niles and Clark Clifford with a view toward Truman’s presidential prospects in the 1948 campaign. Judis skewers Clifford’s later recollections of the period where he denied that politics played any role in Truman’s decision making on Palestine, as did Truman in his memoirs (see p. 403n37).

This study also introduces themes and personalities who appear subsequently in American presidential politics. A key figure is Abraham Feinberg, a major Democratic Party fundraiser and Zionist close to Ben-Gurion, to whom Truman was indebted. At a crucial point in the 1948 presidential race against New York governor Thomas Dewey, Feinberg raised $100,000 in two days for Truman. And in the fall of 1948 when diplomats were proposing demilitarized zones between Israel and Arab states, Feinberg intervened with Truman at the request of Shertok to scuttle the idea (p. 338), and later had a major influence on Truman’s actions regarding the 1949 Rhodes truce negotiations (p. 345). Feinberg later appears as a consultant to Pres. John F. Kennedy, advising him on how to approach Ben-Gurion on the question of Israel’s nuclear program while at the same time, as Warren Bass has shown, Feinberg was advising Ben-Gurion on the best tactics to deflect American pressures.* Similarly, Feinberg appears to have been a major influence on President Lyndon B. Johnson’s policies toward the Arab-Israeli conflict, especially, but not limited to, the 1967 Arab-Israeli war, as I have noted.†

Judis concludes with a brief afterword titled “Obama and the Truman Precedent,” in which he describes how pro-Israeli lobbying and influence in Congress seek to trump American policy considerations today as they did for Truman. His analysis is particularly apt given that the day after President Obama’s 2015 State of the Union address, House Speaker John Boehner announced that he had personally invited Israeli prime minister Benjamin Netanyahu, without informing the White House, to address Congress on matters such as Iran. Though never mentioned, this afterword and recent events confirm many of the arguments presented by Mearsheimer and Walt in their book on the Israeli lobby and American foreign policy.‡

Based on deep research, this at times pugnacious book empathetically presents the Zionist and Palestinian positions from their respective viewpoints, while at the same time acknowledging the political realities behind American decision-making that often disregarded Palestinian needs. As Judis observes (p. 251), due to the Balfour Declaration, “The British and the Zionists had conspired to screw the Arabs out of a country that by the prevailing standards of self-determination should have been theirs.” He is, however, detached enough to know that whatever the era, contemporary policy decisions override past events. This book is as good a contribution as we have to understanding both the periods Judis has studied, and their significance for the era in which we find ourselves today.

Charles D. Smith is the author of Palestine and the Arab-Israeli Conflict: A History with Documents, now in its eighth edition (Boston: Bedford/St. Martin’s, 2013).