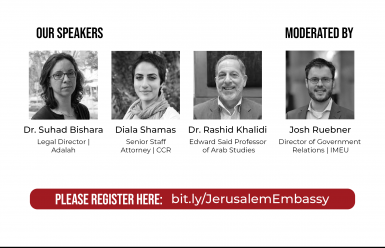 Please join us for a discussion on the US State Department’s plan to build their embassy on stolen Palestinian land in Jerusalem. The plan – a violation of international law – entails the embassy’s construction on private Palestinian property that has been illegally confiscated by Israel, the owners of which include numerous US citizens. Panelists will outline what the plan entails, its illegality, and what you can do to stop the US government from moving forward with the plan!

Dr. Rashid Khalidi is Edward Said Professor of Arab Studies at Columbia University. He is one of the descendants of the original landowners upon whose property in Jerusalem the US government seeks to build their embassy. Dr. Khalidi received his B.A. from Yale University in 1970, and his D.Phil. from Oxford University in 1974. He has taught at the Lebanese University, the American University of Beirut, Georgetown University, and at the University of Chicago. He is past President of the Middle East Studies Association, and the co-editor of the Journal of Palestine Studies. He is also the president of the Institute for Palestine Studies-USA. Khalidi is the author of The Hundred Years’ War on Palestine: A History of Settler Colonialism and Resistance, 1917-2017 (published 2020), winner of the 2020 MEMO Book Award; Brokers of Deceit: How the U.S. has Undermined Peace in the Middle East (2013). He is the co-editor of Palestine and the Gulf (1982), The Origins of Arab Nationalism (1991), and The Other Jerusalem: Rethinking the History of the Sacred City (2020).

Dr. Suhad Bishara is Legal Director and Director of the Land and Planning Rights Unit at Adalah - The Legal Center for Arab Minority Rights in Israel. She has worked with Adalah since 2001. Dr. Bishara, an expert in land rights and dispossession, has more than twenty years of experience litigating cases before the Israeli Supreme Court and served as lead lawyer in major human rights cases regarding Palestinian citizens of Israel and international humanitarian law cases concerning Palestinians in the 1967 Occupied Territory before the Israeli Supreme Court. She is leading the legal team filing an objection in the Israeli planning authorities against the US government’s plan to build their embassy on Palestinian land. She holds an LL.B. from the Hebrew University of Jerusalem, and an LL.M. in Public Service Law from New York University's School of Law (USA), and recently received a PhD from King’s College School of Law in London and teaches Human Rights Law at the college. She also was Palestine & Law Fellow at Columbia University Law School (2014-2015).

Diala Shamas is Senior Staff Attorney at the Center for Constitutional Rights. She works on challenging government and law enforcement abuses perpetrated under the guise of national security, both in the U.S. and abroad. Diala has worked at the intersection of surveillance, policing, immigration, and advises social justice movements and advocates as they face suppression efforts at the hands of the state and private actors. Diala has also worked on a range of international human rights issues. This includes human rights and humanitarian law violations in the Israeli-occupied Palestinian Territory, where she has lived and worked extensively, as well refugee policies in Australia and Greece. Diala is a graduate of Yale Law School.

Josh Ruebner is Director of Government Relations at the Institute for Middle East Understanding. He is adjunct lecturer in the Justice and Peace Studies program at Georgetown University and author of Shattered Hopes: Obama's Failure to Broker Israeli-Palestinian Peace and Israel: Democracy or Apartheid State?