The politics of cement can no longer be seen only as the ability of Palestinians—whether in villages, refugee camps, or cities—to enact their right to remain on the land given that the question of cement sovereignty touches on the entire network of production, circulation, and urban metabolism. –Samir Harb

We are pleased to announce the release of the latest issue of the Journal of Palestine Studies, guest edited by Sherene Seikaly and Sophia Stamatopoulou-Robbins and focuses on infrastructure, environment, and health in Palestine. The contributors in this special issue draw on original archival, spatial, and ethnographic research to parse the realities, experiences, and lessons that Palestine offers beyond its status as a site of settler-colonial deprivation and toxicity. It sheds new light on the conditions and possibilities of politics. The issue features an article by Samir Harb tracing cement circulation and transportation networks to explore the struggle over sovereignty and urbanization in the West Bank. The article, along with a review of Adania Shibli’s novel, Minor Detail, reviewed by Isabella Hammad, is free to all readers.

Other pieces in this issue include articles by Nadi Abusaada (open access) about municipal water projects and urban rights in modern Palestine; Leena Dallasheh writes about a water infrastructure project in Nazareth during the early years of Israeli statehood when Palestinians attempted to preserve local autonomy; and Cristina Violante (open access) investigates the relationship between water and time in Mandate Palestine. This issue also features two reflection essays: one by Nimrod Ben Zeev in which he addresses Palestinian overrepresentation in the most dangerous trades in the Israeli construction industry and another by Emily McKee in which she critiques the humanitarian logics that often frame water solutions in Palestine. The issue also contains two other book reviews of Dear Palestine: A Social History of the 1948 War by Shay Hazkani, reviewed by Areej Sabbagh-Khoury, and The Hundred Years’ War on Palestine: A History of Settler Colonialism and Resistance, 1917–2017 by Rashid Khalidi, reviewed by Laila Parsons. 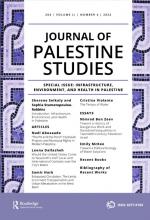