Camila Abufom and I bond over a shared love for “My Big Fat Greek Wedding.” The 2002 romantic comedy about a WASP marrying into a Greek family was the first time we saw a family that slightly resembled our own appear on screen.

Abufom is a Palestinian-Peruvian actress, restauranteur, and organizer. The Palestinian diaspora in Peru is incredibly small — only a few thousand immigrated to the Andean country — and the ensuing lack of representation meant we looked for and found familiarity, even where there was none.

Sitting in Camila Abufom’s living room in Lima, I catch myself nodding constantly during our conversation. I am unable and unwilling to contain my excitement at discovering unexpected coincidences in our childhood memories, in the cadence of the conversations that served as the soundtrack to our upbringing.

“All the aunts and uncles and great aunts and great uncles and dozens of cousins — we call that hamule,” she tells me. “Everyone [is] always around, talking over each other. Always meddling, never letting anyone else speak.” The hamule (roughly a term for ‘kinship group’), a noun derived from the Arabic verb hamala (to carry), is a concept that is key to families of Arab descent in Latin America. It is also almost exclusively used in the Latin American context. Though it formally refers to a group sharing patrilineal descent, in practice it encompasses the wider range of familiar relationships, including family members, friends and neighbors. A close-knit group, sharing care, grievances, and an unquestionable right - and obligation — to pry and intervene.

This is the first thing I notice about Voces de la diáspora, the audio documentary released by Abufom in 2021. Recorded for the Sonic Liberation Front on Radio Alhara – an online radio station broadcasting from Bethlehem, founded in response to the ethnic cleansing of Sheikh Jarrah – Voces de la diáspora was part of a 24-hour long lineup curated by Peruvian musician and producer Irazema Vera in solidarity with Palestine. The one-hour long documentary combines ambient sounds, conversations with and amongst Abufom’s family members, and her own musings on belonging, identity, and resistance as a member of the Palestinian diaspora in Peru. 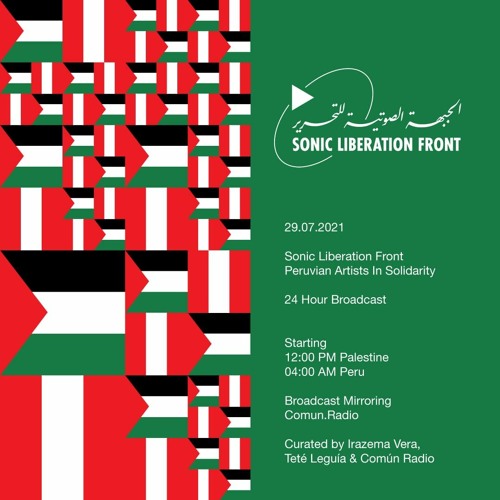 A wide range of topics are discussed.  An uncle recalls losing friends in the first Intifada; Abufom remembers Palestinian ballads from her childhood that she hopes to hear again; she and her father talk about being referred to as Turks, the umbrella term for Arabs throughout Latin America; she laughs with other family members about only knowing cuss words in Arabic.

In a particularly endearing moment, she sits with a chorus of aunts, as they recall their stories of exile. One of her great aunts sings her a song in Quechua, an indigenous Andean language, which she learned upon her arrival to Peru after her family settled in a town in the highlands, following rumors of gold in the area. Another aunt talks about her sister making a living by learning to sew men’s shirts, foreshadowing the trade Palestinians would eventually be known for in Peru and through most of the region (“¡Fabrics!”, people would often exclaim when I told them about the origins of my maternal family). The words overlap, turning into almost indiscernible noise.

“This is all very Arab, isn't it?” she asks, raising her voice over theirs. “Everyone trying to speak at the same time.” If she meant it as a hint, it falls on deaf ears: the cascade of voices merely intensifies until they become a familiar cacophony.

Like mine, Abufom’s great-grandparents were Palestinian Christians, who emigrated from Beit Jala. They escaped what they felt was an increasingly hostile environment, eventually making their way to Chile and Peru, after a four-month trip across the ocean and a forty-day quarantine on an island in the coast of Argentina. Her family arrived to Peru in waves: the first in the early 1920s inspired to follow pioneers' path to do business, the second was during the 1948 Nakba when more than 700,000 Palestinians were expelled from their homes by Zionist militias, and the third was after the first Intifada of the late 1980s. Unlike me, she is the result of generations of Palestinian descendants who married strictly within their own clan, preserving not just a strong ethnic and cultural identity, but also their last names. In her audio documentary, she reflects on growing up in a country to which she has no blood ties, and on her longing for a motherland she has not yet seen.

“I am Peruvian,” she states. “But I am also a Palestinian who just happened to be born in Peru.”

As the descendant of a Palestinian grandmother who married a non-Arab, I often struggle with coming to terms with my own sense of belonging to the diaspora. I don’t have a Palestinian last name and my ethnic features have mixed with those of my non-Arab ancestors. It’s difficult not to feel like an impostor. How much easier it would be, I find myself thinking, to have such a straight lineage, a heritage so clearly claimable?

Camila is quick to dispel my fantasy. “I wonder a lot about what it means to be part of the diaspora,” she says. “And whether I have the right to talk about this, to feel the displacement and the occupation so personally.” But whether she doubts it or not, it is very much personal.

Camila felt a sense of rage within her family that was absent in the homes of classmates when she was growing up, an anger that would bubble up whenever her father spoke of Palestine. Unlike in my family, her intergenerational trauma was never diluted; there were no other storylines to fill the void felt by the absence of a motherland.

Halfway through the documentary, Camila reads a translation of the poem Shades of anger by Palestinian poet Rafeef Ziadah:

“I am an Arab woman of color, and we come in all shades of anger. And did you hear my sister screaming yesterday, as she gave birth at a checkpoint?”

She stops herself mid-sentence and wonders whether the stereotype of the angry Arab is counterproductive. Are people willing to listen to such an incensed voice? Can rage harvest solidarity? Will anger advance the cause? The hesitation in her voice is palpable as she attempts to process questions and doubts over the poem.

I ask her to elaborate on her reluctance. She takes out her phone and reads the poem aloud one more time. She falls silent, perplexed at the doubts she expressed in the documentary. “I don’t know why it upset me so much at that time,” she eventually says. “I do relate to it. Of course, I am angry. But perhaps I was right, perhaps anger is not the best strategy.”

We wonder whether distance — in time and geography — has granted us the privilege of thinking about displacement and solidarity and occupation through the lens of strategic action. It was not our bodies, Camila and I, that were shot; not our homes that were torn down. Not our fields, not our trees, not our schools, not our streets. But at the same time, all rightfully ours: it all belonged to our parents, our grandparents, our people. How can we resist from the safety of distance?

“The way I experienced diaspora and Palestinian culture was through music, through food, through stories. There is resistance in celebrating them, in documenting them and in preserving them,” Camila suggests.

I tell her about growing up believing that marmahon (known as maftoul in the Middle East) was the traditional Christmas food in all households, she talks about za’atar and baklavas. This is how our families kept their traditions alive; spreading them over holiday tables, sharing them with those they hoped would eventually do the same. While talking about this, we realize we both have an olive branch tattooed on our arms.

But for Abufom, this was never enough. She is also a local organizer, advocating for BDS and creating awareness around the occupation of Palestine. In 2016, she co-wrote and performed in a play where she confronted her experience as part of the Palestinian diaspora.

Looking back, she says she’s had enough of the two sides and whataboutism, though wonders whether people in Peru would have been willing to listen otherwise. Abufom recalls organizing countless protests in Lima which saw only a handful of attendees.

Being an organizer is an almost foolproof gateway to burnout, particularly when attempting to foster solidarity towards a remote and foreign cause. “Peru has its own share of problems,” she says. “And they are not small. There’s only so much that people can commit to.”

Unlike organizing, however, documenting her family histories as members of the Palestinian diaspora is energizing, rather than draining.

“Listening to them and registering their stories is a reminder that Palestine was a nation, inhabited by real people. And it is a way to keep them alive.”

Jimena Ledgard is a writer and journalist from Lima, Peru. Her work has received grants from the Open Society Foundation, the International Women’s Media Foundation and the Fundación Gabo. You can find her on https://jimenaledgard.cargo.site/

From the same blog series: Palestinians in Latin America