Editor's Note: This article was originally published as "Revolution Must Mean Life” – Maysam Ghani on September 20, 2022 by C Magazine, a contemporary art and criticism periodical. It is republished on our blog with permission.

Although many in the Palestinian diaspora may have never seen the Israeli West Bank wall in person, myself included, they are fully aware of its use as a tool for racial segregation, displacement, and apartheid against Palestinian peoples. The wall is famously covered in political messages, murals, and imagery in support of Palestinian resistance and the fight for liberation. These archetypal stencils of Palestinian motifs and political slogans were recreated over 9,000 km away at Whippersnapper Gallery in Toronto. Presented as a multimedia exhibition developed through Mayworks Festival’s Labour Arts Catalyst program, Palestinian poet Maysam Ghani collaborated with Labour4Palestine (a pan-Canadian network of labour activists) to produce “Revolution Must Mean Life.” 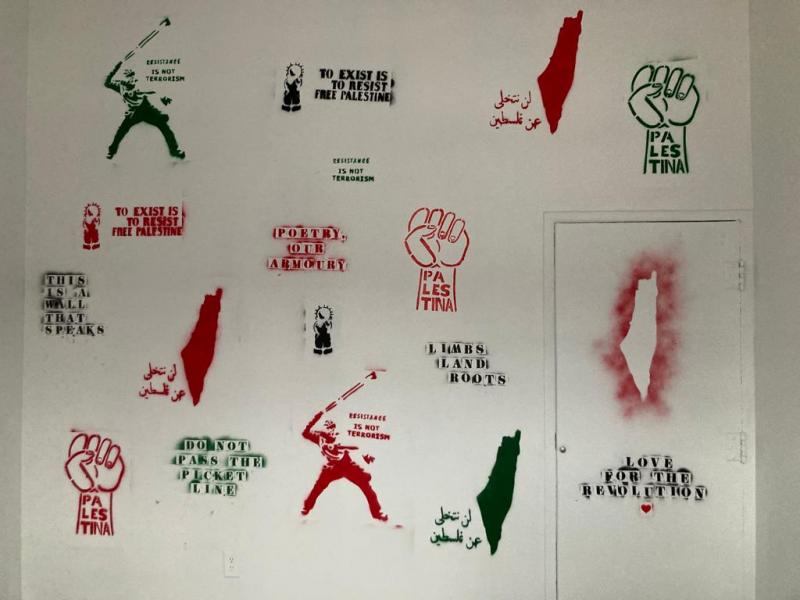 Mounted in the gallery’s storefront window, a street-facing video installation sits on the floor in front of walls filled with stencilled paintings. One stencil references political cartoonist Naji al-Ali’s iconic symbol of defiance: Handala. In the Handala sketch, a barefoot 10-year-old boy in tattered clothing stands with his hands clasped behind his back. During a gallery visit hosted by Ghani, along with Youssef Mutawe (who edited the exhibition’s video component), the public was invited to bring or make a poster that would be added to the adjoining walls. In the spirit of the ubiquitous Handala symbol that covers the West Bank barrier, by the end of Ghani and Mutawe’s gallery visit, visitors had created enough posters and stencils to fill two entire walls. 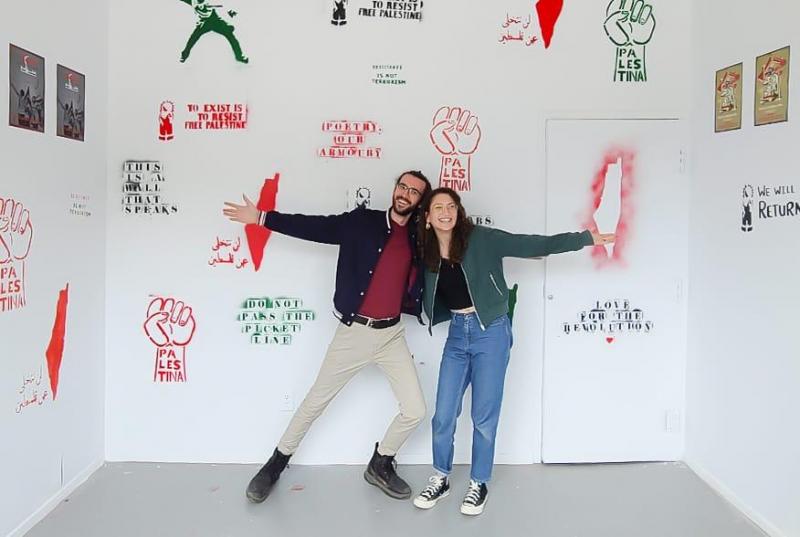 The video accompanying “Revolution Must Mean Life” blends historical and contemporary clips of various Palestinian villages and cities, including footage shot by Palestinian labour organizers based in Al Khalil, Nablus, Qalqilya, and Ramallah. These same organizers were also interviewed by Labour4Palestine, and the resulting conversations inspired Ghani’s accompanying spoken-word poem (which can be viewed here, the video was edited by Youssef Mutawe and the poem was translated into Arabic by Laura Albast). In a particularly impactful moment set to the heartbeat rhythm of Mohammed William Al Shalalfeh’s drumming of the tabla, Ghani tells us how “the same state that utilizes labour to build their democracy manufactures the weapons of our destruction collectively,” over images of billowing black smoke surrounding a collapsing bombed building. Ghani, Labour4Palestine, Al Shalalfeh, and Mutawe created a moving exhibition that reminded publics of the importance of labour movements in shifting global support toward solidarity with Palestinian freedom. 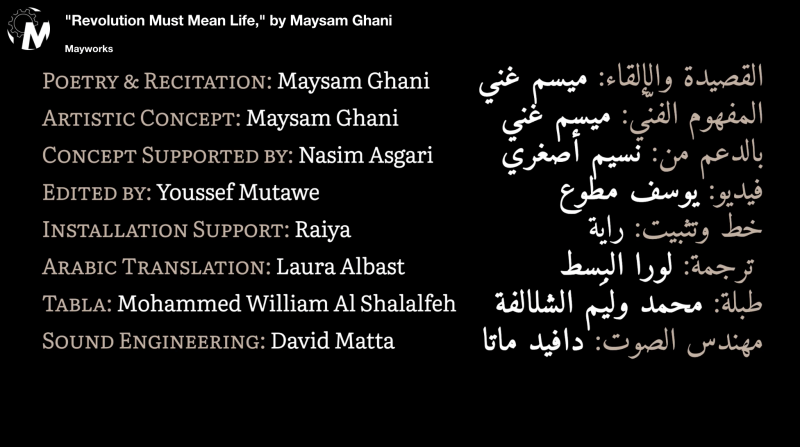 Project statement pulled from the website of Mayworks Festival of Working People and the Arts: With poetry at the core, this project weaves together film, music, installation, and performance. Tracing the “crevice between hope and despair”, a space that Palestinians know all too well, the work presents a glimpse into the intersections of the labour movement and the Palestinian liberation movement. The project amplifies a collective call to action from Labour For Palestine that transcends BDS resolutions and highlights the central role of workers’ struggles in the resistance against the Zionist regime. This work was envisioned and supported through a series of interviews with organizers from Labour for Palestine on Turtle Island and organizers on the ground in Palestine, situated in Al Khalil, Nablus, Qalqilya, and Ramallah.

The violent attacks on Palestinians throughout 2021 exposed realities of settler colonialism, apartheid and occupation in ways the world could no longer shy away from. Taking the lead from Palestinians on the ground, dockworkers to labour unionists mobilized en masse against the ongoing oppressive systems of occupation, ethnic cleansing, and land theft. Revolution Must Mean Life explores the power of the people and all the ways that they create cracks, breaks and fissures within an oppressive system.

This project was developed through Mayworks’ Labour Arts Catalyst with Nasim Asgari and is co-presented with Whippersnapper Gallery and Trinity Square Video.

Ibrahim Abusitta is a Palestinian-Canadian visual artist that lives and works in Toronto. He graduated from the Fine Arts Photography program at the Ontario College of Art & Design.