The archives of the colonized help debunk the myths and power structures of the colonizers. In Palestine, archival materials—such as those collected by the Palestinian Museum in Birzeit and other Palestinian institutions—bear witness to the history, life, and customs of the Palestinian people. The existence of such archives is vital for the development of the liberation struggle that employs memory as a tool of resistance, in a context where most archival materials were stolen, destroyed or embellished by Israel. At the same time, it is necessary to recognize the nuances within the archive itself, as well as its conceptualization.

Gil Hochberg, Professor of Hebrew, Comparative Literature, and Middle East Studies at Columbia University, argues that archives can produce numbing fatigue and pain, while also unveiling, sharing, and exposing facts, atrocities, and traumatic memories. She also reveals the limits of the archives: they are often stagnant in the grip of history and memorialized as a glorified past. Hochberg offers a different approach to memory and imagination itself—one that recognizes “the fact that historical Palestine has already been destroyed… whatever this means for any future claim of repair, return, and change is something that needs to be invented and constructed— quite literally beyond the limits imposed by the archive as a historical source of factual information to which we owe our future.”

A compelling starting point to rethink the archive is the question that Sophia Azeb, Assistant Professor of Black Studies at the University of Chicago, posits in her article “Who will we be when we are free?”. It is indeed a question that requires a different kind of archive—one that depends on a radical imagination of both the present and the future. As Hochberg writes, this kind of archive has the potential to serve “as a source of imagining a (still-unknown) future by returning to the present with all its visible and invisible potentialities.”

An interesting example of what an archive of futurity can look like is the discussion-based game Countless Palestinian Futures, created by Danah Abdulla, a Palestinian-Canadian designer, educator, and researcher, and Sarona Abuaker, a Palestinian poet, artist, and educational outreach worker. They tested the game for the first time in October of 2021 at The Mosaic Rooms, a London-based non-profit art gallery that promotes contemporary culture from the Arab world. The game aims to “stimulate the imagination [...] through questions that spark conversations and challenge players to consider Palestinian futures. The game features over 60 different questions grouped under six themes and is designed to be played with 3-6 players, or as a conversation prompt between two people.”

Through gamification, the creators foster conversations between the participants that move beyond the constraints of the Palestinian present and think through the material and non-material consequences of a possible return to a liberated Palestine, employing imagination as both a creative and political tool. Thus, the future becomes a powerful and productive ground to collectively answer to the above-mentioned question: “Who will we be when we are free?” 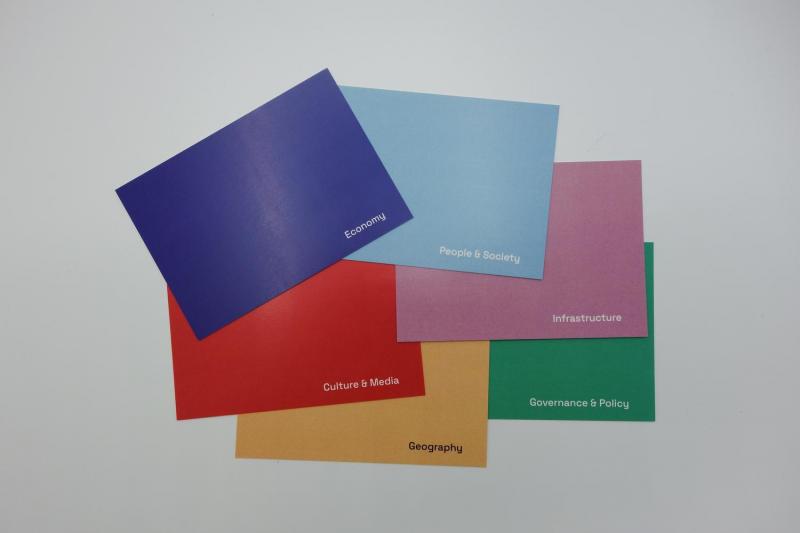 During a webinar given at SOAS in February of this year, Abuaker explained that Countless Palestinian Futures is meant to empower Palestinians, seen not as victims of past traumas and present predicament, but as agents able to enact practices of world-making through imagination and discussions based on their own lived experiences and backgrounds.

Abdulla and Abuaker developed Countless Palestinian Futures around six themes, including geography, governance and policy, people and society, culture and media, infrastructure, and economy. They invited several contributors to produce over sixty questions that were subsequently categorized according to each theme. Rather than a fixed and regulated entity, it is conceived as a project open to different iterations and outcomes. The moderator can directly choose a theme or a specific question from a set of cards and invite the participants to reply. Each conversation can last one or two hours, until the participants are satisfied, and the answers are collectively collected on paper. The questions range from the future form of governance of Palestine to the urban planning and transportation strategies, from the impact of a liberated Palestine on the surrounding Arab countries, to the hypothetical uses of the Apartheid Wall.

The material collected through each session of the game can be read as an archive of oral imagination of Palestine that goes beyond the archival domination of settler-colonialism. Countless Palestinian Futures acts as a counterhegemonic discourse, one that employs imagination and futurity in order to suggest possible social change. The game conveys the fact that archives are not always fixed structures to record or analyze the past… they can be a valid source to build the future to come, based on political imagination, speculative fiction, and creative collective endeavors.

For the moment, Countless Palestinian Futures is a prototype. The two creators are still developing it through trial sessions. Their ultimate aim, however, is to expand it to a broader public, and to translate it into Arabic.

Ale/Sandra Cane is an independent researcher of queer culture and contemporary Palestinian culture. They studied at SOAS, University of London. Their research examines radical imagination of futurity as a cultural practice of queering normative narratives of the present. They currently work at Pirelli HangarBicocca, a contemporary art museum in Milan, Italy, and write for Italian magazines and online platforms, such as NOT — Nero on Theory, Harper’s Bazaar Italia, ArabPop, Il Tascabile, Quid Media and Zero.