While concepts may have evolved, for example from a politically-charged literary nahda in the service of the national cause to a literature of resistance, what persists are the conditions of struggle to which Palestinian literary figures continue to be subjected, whether under the oppressive rule of the Ottomans, the British, or the Israelis. – Ibrahim Mahfouz Abdou and Refqa Abu-Remaileh

We are pleased to announce the release of the latest issue of the Journal of Palestine Studies featuring an article by Ibrahim Mahfouz Abdou and Refqa Abu-Remaileh on a literary nahda, or renaissance, in Palestine before 1948. This piece is part of a larger project tracing and archiving Palestinian literature and literary figures prior to the Nakba. The article, along with a review of Rebecca Stein’s book, Screen Shots: State Violence on Camera in Israel and Palestine, by Sherena L. Razek is free to all readers.

Other pieces in this issue include an article by architect Noor Tayeh on the complications and politics of upgrading refugee camps in Gaza; an essay by Tareq Baconi on Israeli apartheid as an iteration of Zionist settler colonialism; an essay by Elham Fakhro and Tareq Baconi on normalizing efforts between Israel and countries in the Gulf; and an interview with the Palestinian activist Muna El-Kurd of Sheikh Jarrah in Jerusalem on her struggles resisting her expulsion and that of her family from the neighborhood by Israeli entities, including settler groups. 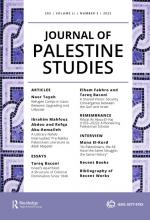