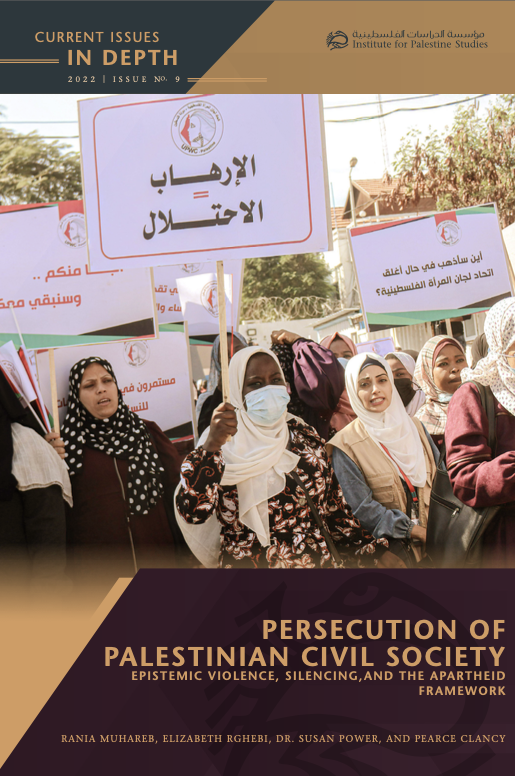 Palestinian civil society is currently facing an existential threat. On August 18, 2022, the Israeli occupying authorities raided and forcibly closed seven leading Palestinian human rights and civil society organizations, threatening to further detain several of their directors should they continue their human rights work. On October 19, 2021, six of the organizations were arbitrarily designated as “terror organizations” by the Israeli defense minister under Israel’s so-called Count- er-Terrorism Law of 2016. The latest escalation of attacks against Palestinian civil society forms part of a systematic policy to silence and delegitimize all forms of Palestinian resistance to Israeli oppres- sion, including efforts to seek justice under international law. This monograph argues that silencing and delegitimization of Palestinian human rights advocacy, as epistemic violence, constitute key tools to entrench Israeli apartheid over the Palestinian people as a whole. The arguments here draw on Article 2(f) of the 1973 Apartheid Convention, which recognizes as an inhuman act of apartheid the “persecution of organizations and persons, by depriving them of fundamental rights and freedoms, because they oppose apartheid.” Through the weaponization of “terrorism” smears, the Israeli regime seeks to discredit decades of Palestinian antiapartheid knowledge production, mobilization, activism, and advocacy for Palestinian liberation, and to justify the very oppression Palestinian civil society is working to challenge. Thus, in the growing international movement against Israeli apartheid, it remains essential to lend support to the work of Palestinian civil society, to reject the baseless designa- tions by the Israeli occupying authorities, and to elevate the experiences of and knowledge production by Palestinians who are directly affected by Israeli apartheid. This monograph is a part of our collabo- rative series with Against Apartheid and Racial Discrimination (AARDi) in which we aim to further uncover the systemic racism of the Israeli apartheid state.

Rania Muhareb is an Irish Research Council and Hardiman PhD scholar at the Irish Centre for Human Rights in the School of Law at the University of Galway. She is a policy member of Al-Shabaka and a former legal researcher and advocacy officer with Al-Haq. She holds an LLM in international human rights and humanitarian law from the European University Viadrina Frankfurt (Oder) and an undergraduate degree from Sciences Po Paris, Campus de Menton.

Elizabeth Rghebi is the Levant researcher at the Cairo Institute for Human Rights Studies, based in Tunis. She received her MA in Middle Eastern studies from Columbia University in the City of New York and her BA in Government from Georgetown University.

Dr. Susan Power is head of legal research and advocacy at Al-Haq. She previously lectured for seven years and was acting program director at Griffith College Dublin and has been a member of the Irish Red Cross Corn Adomnáin Committee on International Humanitarian Law. Susan holds a PhD in international law from Trinity College Dublin. She is coeditor along with Nada Kiswanson of the forthcoming book: Prolonged Occupation and International Law (Brill 2022).