I still struggle to speak and think about my friend Shireen as part of my past rather than my present and future. Whenever I think I have begun to come to terms with her death, it hits me again. Untimely death is all too familiar to Palestinians, but it somehow feels different when it takes your best friend.

Shireen and I became friends in 2004 when we were introduced by my friend Iman Hammouri. The three of us used to meet almost every day. Over time, Shireen and I became close — a trust emerged between us that enriched and strengthened our relationship. Although the three of us were part of a wider circle of friends, there were always things that remained confidential between us. We cared for and supported each other. One of the few things that gives me comfort now is to think back to the wonderful times we spent together, remembering how much we laughed. But this also makes me need her more.

It was only after Shireen died that I learned about how much she did to help those in need. But this did not surprise me, as Shireen always put the feelings of others before her own. She had the capacity for profound compassion, as the Palestinian people acknowledged when they mourned her as they would a family member.

Shireen was an unusually distinguished journalist whose reports educated the world about Palestine and helped international audiences to understand the Palestinian struggle. She had an ability to communicate that extended beyond words — when I showed my master’s students one of her reports, they were able to gain a sense of what she was saying, even though they did not speak Arabic (even so, I used to tell Shireen that some of her reports should be available with English subtitles, so they could reach a wider audience).

Shireen conducted her reporting with great patience and professionalism. On one occasion, in Hebron, after an Israeli tear gas bomb attack, her eyes watered and she began to choke… but she still finished her report.

Shireen never neglected Palestinian achievements in the face of hardship. In August of 2019, she posted a report on an 80-year-old woman from Asira Al Shamaliya village — north of Nablus — who had learned to use technology and social media to connect with her children and follow up on events. In this report, she wanted to shatter a prevailing stereotype, by showing that the elderly can use technology.

Her work focused on colonialism’s ongoing impact on Palestinians. She had no use for inputting artificial balance, but ensured accuracy which enhanced the credibility of her work. She viewed journalism as a form of resistance. She ‘lived’ her reports — I remember her telling me how she had to remove skunk water the Israeli army had sprayed at her. And her voice will continue to speak — the other day, I was watching one of her reports on Palestinians killed or injured by Israeli soldiers, in which she wondered if the regime would ever be held accountable for the terrible crimes she described.

I watched the attack on her funeral procession with horror, and wanted to reach through the screen to make it stop. Even in death, Shireen had the ability to unite Palestinians, and this was intolerable for the colonizer.

I also remember the pride she took in her work, and the links to her reports she would send me. I remember, for example, her report on the suffering of Palestinian workers who work in the ‘48 Occupied Territories. She traveled with them at dawn and crossed checkpoints alongside them, and also with ‘informal’ workers who enter via other difficult and dangerous routes. In December of 2020, she sent me a report on children in Kufr Kaddom, who suffered life-changing injuries after being hit by dumdum bullets — the same kind that would kill her. I remember her distress and sympathy when she told me about her visits to these families. Even after her report aired, she would remain in touch with those she had reported on. I also remember her report on the Bedouin community in Khirbet Humsah, and how she later called me with anger and said: “Nadia, do you remember Humsah? it is entirely erased!”

After her murder, a woman from Jenin spoke of how Shireen had helped her as she searched for her lost sons amidst the wreckage caused by Israel’s 2002 invasion of the refugee camp. Her reports were a call for justice and for Israel to be held to account for its crimes against Palestinians. It is a particularly grim irony that Palestinians are now demanding justice for Shireen.

Although her career was demanding, Shireen was ambitious and worked to improve herself and make sure she remained up-to-date on the latest developments. She was learning Hebrew — and we used to practice together. She was more committed than me, and quickly mastered the basic concepts of the language. With typical modesty, she assured me this was because she had a clear incentive: to follow the Israeli media.

Shireen meant so much to different people, including the young Palestinian women who used to interrupt us when we were drinking coffee in Ramallah and tell her how much she inspired them. One of her countless achievements was to redefine what it meant to be a female journalist in Palestine. People never spoke about her appearance or social status, but only about her professionalism and commitment to her work. She has cleared the way for others to build on her legacy.

But I was privileged to know Shireen as a friend, and this is, first and foremost, how I will remember her.

Shireen’s sense of humor never ridiculed others. When she made us laugh, it helped us cope with tension and stress, and lightened serious discussions. Now, when I flick through our old text messages, I find myself laughing, smiling, and crying, sometimes all at once. I feel a strong urge to call her, even though I know she will not answer. I miss her and our talks, and I miss sharing photos of myself, my family, and the places I have visited.

Last Christmas, Shireen went with her family (her brother Tony, his wife Lisa, their daughters Lina and Lareen, and their son Nasri) to the United States and sent me photos. She told me that it was a great trip and that they would do it again the following year. Her sister-in-law told me that they had already made the plans.

We used to share books and discuss them. The last book was Ronen Bergman’s Rise and Kill First, which is about Israel’s targeted assassinations. I remember that we discussed the possibility that Israel exaggerated its own ability to carry out such acts in order to scare Palestinians. I also remember us discussing a Haaretz article about Israeli snipers deliberately targeting the knees of protestors in Gaza during demonstrations in the Strip last year. But I never imagined she would be among the victims.

Shireen was always interested in my research. I always enjoyed our discussions because they were something of a meeting point between my academic research and her journalistic analysis. I remember how furious she was when we spoke about Israeli settler and soldier attacks on Palestinians in Jerusalem last May. When my nephew was interrogated and beaten by Israeli interrogators in Jerusalem during these events, she helped me find a lawyer, and supported my sister and I through the agony.

We traveled together a few times, going on tours that were both fun and educational. She was amicable and never confrontational and always tried to find reasonable solutions to problems — in honor of this, another friend and I used to refer to her as our ‘diplomatic friend,’ a name she appreciated. I remember that, whenever there was a misunderstanding, she would always take the initiative in making up. She was a perfect friend who I felt comfortable talking to because she never judged me.

When I moved to the UK, Shireen and I used to meet in Amman in the summer, where we relaxed by catching up over coffee and dinners. In February of 2019, she visited me in Exeter and stayed with me. I remember how Shireen reflected on the difference between the cream teas in Devon and Cornwall. She loved Exeter Cathedral and spent time reading through the displays about its history. She became close to my family — my daughters enjoyed spending time with her, as she could effortlessly speak to people of different generations.

Even Shireen’s gifts were symbolically endowed with Palestinian nationalism. She brought me a necklace from Faddet Zaman (‘Silver from the Past,’ a Palestinian heritage project that works to document Palestinian narratives), which is made up of the names of cities in Historical Palestine. She also sent me a frame of an olive tree, which symbolizes our steadfastness and connection to our land.

We last spoke for about half-an-hour, one day before she was killed. She told me she had begun exercising again and was thinking more carefully about what she ate. We also spoke about the recent EU report on Palestinian textbooks, which entertained Israel’s various embellishments and distortions. She said she would like to report on this, but was too busy working on a report in the Jenin refugee camp where she would later be killed.

As a Palestinian, I will honor all that Shireen achieved as a female journalist without parallel in the Arab world. But as her friend, I will remember someone who enriched my life beyond measure. She may be gone, but she will always be alive in my heart.

Dr. Nadia Naser-Najjab is a lecturer in Palestine Studies, European Centre for Palestine Studies- Institute of Arab and Islamic Studies, University of Exeter. Prior to this, she was an Assistant Professor, Birzeit University, Department of Philosophy and Cultural Studies and the MA program in Arab Contemporary Studies. Nadia holds a PhD in Middle East Studies from the University of Exeter. Her recent book is entitled Dialogue in Palestine: The People-to-People Diplomacy Programme and the Israeli-Palestinian Conflict (Bloomsbury Publishing, 2020). 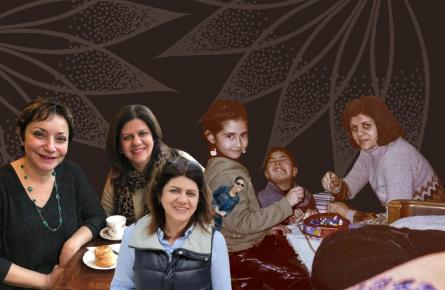