Leopardi, The Palestinian Left and Its Decline: Loyal Opposition 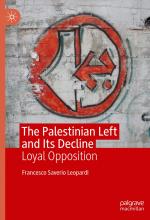 In his first book, which comes out of a 2017 doctoral dissertation from the Islamic and Middle Eastern Studies department at the University of Edinburgh, Francesco Saverio Leopardi sets out to identify what lies behind the marginalization of the Popular Front for the Liberation of Palestine (PFLP) within the Palestinian Resistance Movement (PRM) between 1982 and 2007. Leopardi identifies two main causes: first, the PFLP’s inability to propose a counterhegemonic political program, which resulted in the PFLP’s dependence on the Palestine Liberation Organization (PLO) for legitimacy and finance; and second, divergent class interests within the PRM. Stuck between adherence to the PLO framework and radical opposition to its leadership, and propelled by contrasting class interests, the PFLP adopted contradictory policies (which the author calls policy fluctuations) that undermined its efficacy and popularity. Leopardi terms this gridlock the “opposition-integration dilemma” and argues that it applies to numerous Marxist parties operating within nationalist-hegemonized political spheres in the Arab world. Leopardi’s book succeeds in describing and contextualizing the PFLP’s contradictory behavior but falls short in demonstrating how such behavior relates to the causes identified as being at the root of the PFLP’s marginalization.

Leopardi is interested in the PFLP’s own responsibility for its decline. He seeks to dispel myths that attribute the marginalization of leftist parties to external factors such as the fall of the Soviet Union. For this reason, he focuses on internal factors responsible for the PFLP’s decline, taking as his unit of observation the organization’s “collective agency”—defined as “the complex of discourses, priority formulation, positions and decisions” (p. 3). Leopardi then links the PFLP’s practice of its agency to other structural factors, both internal and external.

The book’s chapters unfold chronologically, following the PFLP’s policy fluctuations from the early 1980s (chapters 2–3), through the First Intifada (chapter 4), the 1990s (chapter 5), and the Second Intifada until the Fatah-Hamas split (chapter 6). A seventh chapter constitutes a comparative addendum that contrasts the PFLP with the Kurdistan Workers’ Party and Egyptian communist organizations, highlighting the PFLP’s shortcomings and demonstrating the applicability of the book’s concepts to other leftist movements.

One of the major fluctuations Leopardi identifies is the relationship with Fatah, which is characterized by recurring cycles that start with the PFLP’s outright rejection of the former’s policies and end with concessions in the name of unity. Other fluctuations include the PFLP’s relationship to its grassroots institutions—between support and incapacitation (chapter 4)—and with Islamic parties—swinging from outright rejection, to alliance, then ambivalence (chapters 4–6). In his analysis, Leopardi focuses on the “opposition-integration dilemma.” The first two chapters attribute this dilemma to the organization’s dependence on the PLO, while the remaining chapters consider the results of such dependence, including the bureaucratization of the PFLP’s ranks and the related divide between its diaspora organization (more bureaucratized) and its branch in the occupied Palestinian territories (oPt, more grassroots). Tracing policy fluctuations to such structural features, chapter 6, for example, asserts that financial and political dependence on the PLO informed the PFLP’s wavering positions on the Fatah-Hamas split in 2007 (p. 219).

Leopardi’s overarching argument is compelling. Nonetheless, the book remains superficially descriptive, seldom bringing forward evidence that links observed policies to the factors hypothesized to have precipitated them. The reason for this limitation is that Leopardi relies almost exclusively on party literature (mostly al-Hadaf, the PFLP’s mouthpiece, and other official publications) as his primary source and leans heavily on secondary sources. Therefore, while the book identifies policy decisions, it is unable to analyze the decision-making process at work, uncovering underlying motives or ties to structural features. Relevant details are missing: politburo members’ stances on decisions regarding the Fatah-Hamas split, for example, which could have enabled the author to home in on the causes for the fluctuations and corroborate his argument in chapter 6. Another instance is where Leopardi attributes al-Hadaf’s publication of only two communiques from the oPt in 1989–90 to the diaspora leadership’s control of the organization and their undermining of the oPt branch (p. 129). Yet he does not qualify this inference, showing who made the decision on publication, for example, or assessing the possibility for the oPt branch to have delivered more written material to al-Hadaf at the time.

Furthermore, the book barely engages with the causes posited as lying at the root of the PFLP’s dilemma and decline. Divergent class interests within the PRM (specifically in relation to national, political, and social consciousness [p. 9]) remain largely unexplored, while the question of counterhegemony is only addressed head-on in the comparative chapter. There, Leopardi contends that the PFLP’s inability to achieve counterhegemony was a result of its failure to elaborate a Marxist case for national liberation and to evolve ideologically. What stood between the PFLP and such an achievement, we learn, was the pan-Arab ideological background of its founding leadership, the limited theoretical capacities of its secretary-general, George Habash, and its rigid organizational structure. The book’s narrative fails to highlight these factors and their role in the PFLP’s dilemma.

Leopardi’s contribution lies in framing and giving an overview of the PFLP’s conduct between 1982–2007. The concepts Leopardi utilizes, such as “opposition-integration dilemma,” demonstrate analytical potential for the study of the Palestinian Left and opposition movements in general. At a time when unity is invoked as a solution to the Palestinian “impasse,” Leopardi’s argument that the pursuit of unity both reflected and contributed to the PFLP’s marginality provides a critical perspective worth considering. Furthermore, Leopardi presents fruitful avenues for future research—such as his brief comparison of the Palestinian and Kurdish Left. For these reasons, and despite its shortcomings, this book is a welcome addition to studies of the PRM and the Palestinian Left specifically.

Author biography:
Faiq Mari is a doctoral candidate and fellow at the Institute for the History and Theory of Architecture (gta) at ETH Zürich. His current work investigates the role of masha' (commons) in Palestinian struggle.