The Orchards of Saida: A Story of Tragedy and Resistance, 40 Years after the Israeli Invasion of Lebanon

History
The Orchards of Saida: A Story of Tragedy and Resistance, 40 Years after the Israeli Invasion of Lebanon
Date:
July 20, 2022
Author:
Zakaria Elkawa

On June 6th, 1982, the Israeli army began a three-pronged land invasion of Southern Lebanon. This followed two days of bombing, which made my grandmother quiver – my grandfather had put the mattresses in the hallways to avoid flying shrapnel.

The intention was to drive the Palestinian Liberation Organization (PLO) out of Lebanon, confronting them directly in Beirut. Doing this meant advancing through the Lebanese coastal road. By June 7th, there was only one major city blocking the path to the capital: Saida.

My family was not a traditional Saidawi* family. They had only moved there in 1978 after the situation in Beirut had become unlivable three years into the civil war. They settled in quite well, though. My grandfather recovered what he could from his ransacked fabrics shop to open a new store near the souks of Saida, while my father and two aunts were enrolled in the Makassed Islamic School. 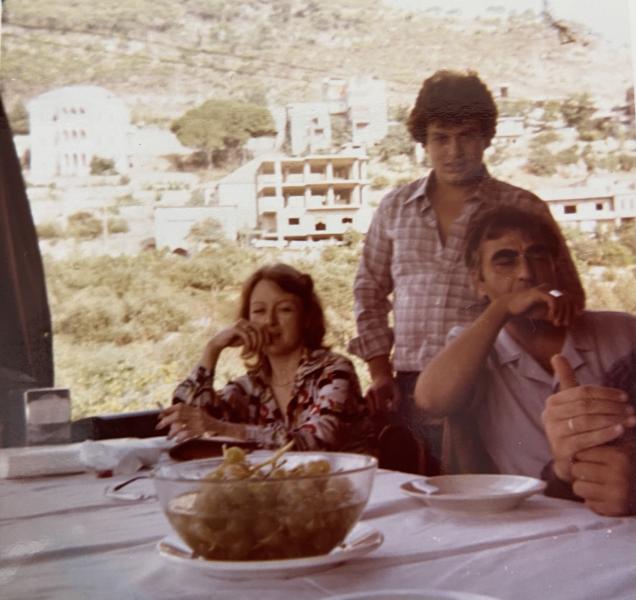 My father enjoying a family lunch with my grandmother and late grandfather in Jezzine a year before the war. My grandfather saved up to afford lunch in Jezzine: a few times each year, it was safe to go up there from Saida.

My father was sixteen, an ambitious student who, like many boys his age, was prepared to carry a gun for the day when an Israeli invasion would come, as it almost did in 1978. Most of his friends in Saida were Palestinian, and the souks where he spent a great deal of his time doing small jobs for merchants were, as they still are today, a center for Palestinian life in Lebanon. He would not bend to any notion that Israel represented anything other than the enemy for Lebanese and Palestinians alike.

The same was the case for most Lebanese residents of Saida, for resistance to Israeli advances first came through Ain El-Helwe, the largest Palestinian refugee camp in Lebanon. As F-16s pummeled the camp, fighting quickly spread to Saida’s center, Nejmeh Square. My grandmother recalls the noise of the planes, believing they were on the roofs because they flew so low. One of my aunts was particularly petrified, constantly hiding beneath the bed.

Despite the gap in weaponry and equipment, fighters from both the PLO and the Popular Nasserist Organization used the nature of Saida to their advantage. The city, particularly in 1982, was quite small, with only one main road between the souks/port on one side and great orchards of citrus and lemon extending towards the mountains on the other.  There were plenty of opportunities to launch sneak attacks from the significant amount of tree cover, which stopped an initial Israeli advance from south to north. Yet, after Israel encircled the city, they were able to clear a path after six days of fighting, leading to an occupation of the city for the next three years, as the rest of the Israeli army made its way towards Beirut.

The earliest days of the occupation were particularly degrading. Bombs would continue to drop, as well as constant leaflets requesting compliance with evacuation or assembly orders. My aunt once mentioned freezing at the sight of an Israeli sniper aiming his gun at her after being spotted after curfew. My father told me of two different occasions where he was detained by Israeli soldiers, once in a roundup of “suspicious kids” at his school and the other directly from his building for three days after my family was accused of hiding weapons. His second detention terrified my grandfather, who could barely enjoy my father’s return after seeing the fresh cigarette burns on his back. Acts of humiliation, though, would not deter resistance to the occupation. Israel found it very difficult to maintain, particularly with the continued use of the orchards for secret attacks, accelerating the Israeli policy of burning farmland.

The orchards did not just contain local produce for sale; they were virtually common property. The lemons, citrus, and loquat (إسكدنيا) were numerous. My grandmother still yearns for the days that my father and aunt would pick them directly from the vast number of trees on the way home from school. Sometimes the fruit would fall onto their balcony from an overgrown tree. The destruction of the orchards was not just another kick in the teeth: it was viewed as an attempt by the Israeli army to reshape Saida’s identity and destroy the city’s ability to sustain itself. It enraged Saidawis and only made reprisals against Israeli soldiers more common. It also made the joy during the Israeli evacuation from Saida in February 1985 all the sweeter, as old women threw rice from balconies and children danced in the street.

My father does not look at the burning of the orchards in mourning. While he still longs for their presence every time we pass Saida, his belief that it was a motivating factor for Saidawis to continue their ultimately successful resistance against Israel stands strong.

My grandmother recalls that Israeli troops were constantly trying to convince the population that they were being liberated from a debilitating Palestinian presence. But in reality, it was Palestinians alongside Lebanese farmers who grew and took care of the trees, so nobody believed the invaders’ propaganda.

The Israeli assault was not just about driving the PLO out of Lebanon but also about proving that Palestinian-Lebanese co-existence was unpalatable. Saida proved that notion false. Despite the emptiness left from the destruction of the orchards in many parts of Saida, it is still a city full of life from the Palestinian refugees and Saidawis who live there side-by-side.

* Saidawi is Arabic for 'Lebanese from the city of Saida'.

Author's note: I want to thank my family for narrating their traumas of the Israeli invasion and sharing the photograph. I would also like to dedicate this to all people living under occupation, who resist knowing one day, they will be free.

Zakaria Elkawa is an undergraduate student majoring in International Relations and Anthropology at Boston University. He is an aspiring law student interested in migration and refugee movement, with an interest in incorporating urban studies into his academic and professional work. He has worked with the Boston University Initiative on Forced Displacement before, and been published in the Boston University Pre-Law Review Fall 2021 edition.