Shireen Abu Akleh, a Palestinian-American veteran journalist at Al-Jazeera, was targetted and killed by an Israeli sniper while covering a raid in Jenin. Abu Akleh was visibly wearing a blue “PRESS” vest and a helmet when she was hit by an Israeli live bullet, as witnessed by several other journalists.

Despite the number of eyewitness accounts, Israel has come up with various claims to explain the killings of Abu Akleh. So began the series of state-sponsored disinformation and attempts at twisting the story of Abu Akleh’s assassination. Israel’s goal was to deny any responsibility for the killing of Shireen Abu Akleh.

The Israeli government began its disinformation campaign by pointing the blame at Palestinian “gunmen” as the responsible party for Abu Akleh’s murder. They claimed that Palestinian miltants in Jenin were shooting at the Israeli military and they instead hit Abu Akleh, they also released a fabricated video to support their claim. B’Tselem traced the scene from the video and proved that Abu Akleh could not have been hit from there.  Despite that, the Israeli lied to a number of significant headlines explaining the killing of the Al Jazeera reporter as a “disputed” matter where Abu Akleh happened to be caught in “gunmen clashes.” Major news outlets like the New York Times, AP, and BBC News reported her death without establishing Israeli forces as the responsible party.

Instead, headlines like this from The Wall Street Journal were used as the common explanations for Abu Akleh’s murder. Israel’s disinformation campaign deliberately turned Abu Akleh’s murder into a “disputed” issue. It became viewed as a two-sided story, one side is Al-Jazeera’s and Palestinian officials' story and the other is the Israeli government’s.

Several headlines used the passive voice, omitting even the idea that Abu Akleh was murdered. Instead, in these headlines, like the obituary in the New York Times, Shireen Abu Akleh was simply an Al-Jazeera journalist that happened to “die at 51.” 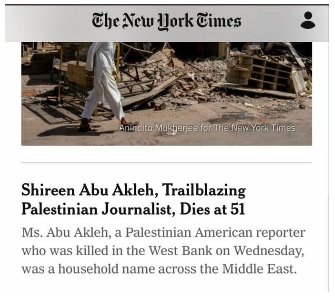 One headline by The Washington Post erased Abu Akleh’s Palestinian identity by calling her an “American reporter.”

This headline implied that Abu Akleh’s U.S citizenship gave value to this news story The complete erasure of Abu Aklleh’s Palestinian identity helps dismiss the fact that she was targeted because she was a Palestinian journalist. This headline also pushes Israel’s deliberate narrative of making it apear that her murder is a “disputed matter.”

Despite Abu Akleh holding a U.S citizenship, the United States response has been completely inadequate. She is not the first Palestinian-American to be killed by Israel and not recieve a sufficient push for justice by the U.S. for their death.

This is the second time this year that Israel killed a Palestinian who happened to hold U.S. citizenship. Omar Assad, 78, was a Palestinian American who was killed by Israeli military forces. He suffered from a stress-induced heart attack after being tortured and dragged by Israeli forces. In response, U.S. officials expressed empty wishes of condolences and urged Israel to investigate its own crime. Their response was severely inadequate.

This is also not the first time Israel has killed Palestinian journalists.

Yasser Murtaja was killed by the Israeli military forces on April 6, 2018, while covering the Great March of Return protests in Gaza. Just like Abu Akleh, Murtaja was wearing his bulletproof vest marked clearly as “PRESS” when he was killed. After Murtaja’s murder, Israel justified his killing by claiming that Murtaja was a member of Hamas without presenting any evidence. Afterwards, they announced they would investigate his murder. Until now, Israel has not published their findings and have gone radio-silent.

Fadel Shana was killed by Israeli forces in Gaza during the 2008 attack. Shana, who worked as a Reuters cameraman, was shelled by an Israeli military tank. Similar to Abu Akleh and Mutaja, Shana was also wearing blue body armor with the label “PRESS.” Israel excused the killing by saying that the military forces were fighting in “an area in which ongoing fighting against armed, extreme and dangerous terrorist organizations.” After Israel conducted their investigation, they exonerated their troops by claiming they were unable to determine if Murtaja’s camera was actually a camera or a missile.

Israel has time and time again proved they can not be trusted to investigate itself. Yet, Biden's administration believes that "Israelis have the wherewithal and the capabilities to conduct a thorough, comprehensive investigation."  The U.S calling for Israel to investigate the killing of Shireen Abu Akleh will not bring justice for Abu Akleh, like it did not bring justice to Omar Assad and many other Palestinians who were murdered by Israeli forces for being Palestinians.

Human rights and advocacy groups have been urging for an independent investigation to take place. Congressional Democrats are gathering signatures to request Federal Bureau of Investigations (FBI) to invesitage Abu Akleh’s killing. It is clear, Israel can not be allowed to whitewash and erase their responsibility from the journalist’s killing.

Mainstream media has failed Shireen Abu Akleh, a fellow veteran journalist in the field. Instead, these media outlets have given legitimacy to her murderers by taking their falsified claims into account as facts without any question asked. They allowed, and continue to allow, the false Israeli narrative to dominate the newscycle. They legitimized Abu Akleh’s murderers by discussing her clearly targeted killing as a “disputed mater.” She deserves better than this.

Shireen Abu Akleh devoted her life to tell other people’s stories, to bring the truth to the rest of the world. The least we can do is to honor her death by reporting on the truth.

Zain Assaf is a student at Georgetown University in Qatar, graduating in May 2023. She's currently pursuing a Bachelor of Science in Foreign Service with a major in Culture & Politics, a minor in History, and a certificate in Media and Politics.