Editor's Note: This article was originally published in Arabic by the Institute for Palestine Studies on May 17. The English translation was first published by Mondoweiss on May 21, and is republished here with permission. The translation was done by Nina AbuFarha.

This is not a lament for Shireen, nor is it a political article. It is not a press report, nor is it a study. It is not a tribute or condolence, because Shireen Abu Akleh deserves more than all of these. These are mere observations and impressions of The Assassination of Shireen, of the deep sadness that has stricken people, all people, not only in Palestine, but across the world. These are impressions of “real funerals” rather than metaphorical, of the sanctity of the casket and coffin, of the raised flags, and those that fell to the ground, of the capital and the conflict over the capital, of the tragic departure of a dear friend, an exceptional human at all levels. I do not write this to praise her virtues, everyone has done so already, although she deserves a lot, and a lot from us.

Shireen was insidiously and aggressively assassinated. With her martyrdom, every Palestinian felt that they had lost their own someone dear. Shireen, who had entered every house through al-Jazeera for a quarter of a century of hard, respectful, and professional journalism, is entering houses this time as a member of every Palestinian family, in the east, west, north, and south. Every Palestinian felt personally touched by her martyrdom, and thus felt subjugated and humiliated. Everyone is asking “how could a well-known journalist be killed in the field dressed in such a way that clearly indicates that she is a journalist: a helmet and a vest with the word ‘PRESS’?” This act targets those who tell the truth, the truth about daily killing in Palestine.

The assassination of Shireen, turning her into news, is an Israeli attempt to hide the truth; and to discipline, intimidate, and deter those who seek to show it. However, the reaction to her murder exceeded all expectations, with hundreds of thousands of people taking to the streets to express their anger, not only in solidarity with Shireen’s small family, but because to most of them Shireen is family.

This large and massive participation in the funeral is but an expression of great anger, and the retrieval of the concept of Palestine, that is still under occupation, thus the retrieval of collective values of people under occupation, the most important of which is the collective sense of the need to be rid of this occupation and end it through resistance. With all its political and religious diversity, including diversity imposed by the Israeli occupation (West Bank, Palestinians of lands occupied in 1948, and the Gaza Strip), the Palestinian people expressed unprecedented national and on-the-ground unity. What made this unity special is that it was not emotional or sentimental, but an extension and an accumulation of what happened in May 2021 during attacks on the Gaza Strip and Sheikh Jarrah, an extension of the great solidarity with the prisoners of the Freedom Tunnel last September. These heroic prisoners, whose heroic and courageous actions reverberated around the whole world, are still being punished by the occupation through the murder of their siblings. Now comes the martyrdom of Shireen Abu Akleh, which served to crown, perpetuate, and define this moment of a great unitary struggle, which will inevitably be understood in the future as a moment of continuity with the events of the past year. 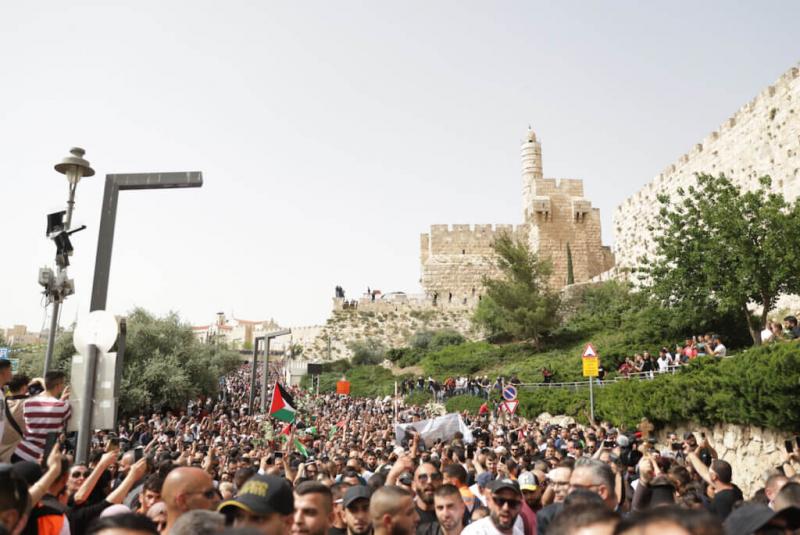 “Jerusalem is Arab”; this is not just a slogan that the residents of the West Bank shouted near Israeli checkpoints that surround the city, which they are forbidden from entering, these are the cheers of hundreds of thousands who shouted from the walls of the Old City, and in its alleyways. This simply means that the conflict over the city has been resolved by Palestinian and Arab consciousness, by global popular consciousness and, will of course be introduced and reintroduced, in international forums.

As for the nuclear state, with a smart, powerful, and technologically advanced, “most ethical” army, as it claims, it proceeded for six consecutive hours to confiscate Palestinian flags carried by mourners, who not only raised the Palestinian flag, but also removed Israeli flags off their flagpoles at Jaffa Gate, one of the gates of the Old City of Jerusalem. This means that 74 years on, this “strong” state is still not able to control neighborhoods in its capital or in “the capital”, which says a lot.

This “strong” state attempted to limit the number of mourners participating in Shireen’s funeral, and planned to implement this order, demanding that the funeral be limited to religious rites, and that mourners would not raise Palestinian flags, and thus deployed police forces to the vicinity of the (St. Louis) French Hospital to tighten its control over the funeral.

This “strong” state permitted itself to do what no one in history has done, no matter their religion, and assaulted the casket in a very hideous way that will forever be engraved in people’s memories. With this assault, Israel assassinated Shireen Abu Akleh again, but in doing so, it strengthened the resolve of mourners to participate mightily in the funeral, in a manner deserving of a martyr from Palestine, and instilled in the minds of people in the entire world the most heinous picture of this occupation. 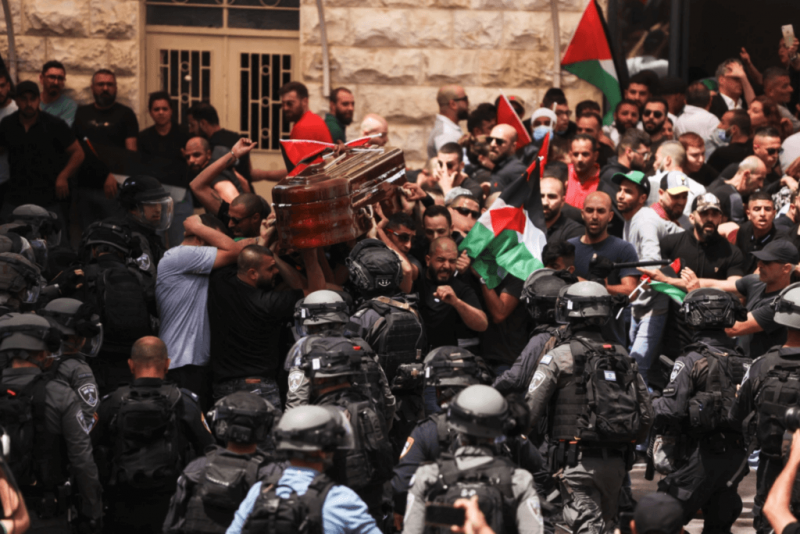 ISRAELI SECURITY FORCES ATTACK PALLBEARERS CARRYING THE CASKET OF SHIREEN ABU AKLEH OUT OF THE ST LOUIS FRENCH HOSPITAL IN OCCUPIED EAST JERUSALEM'S SHEIKH JARRAH NEIGHBORHOOD. BEFORE BEING TRANSPORTED TO A CHURCH AND THEN HER RESTING PLACE IN JERUSALEM. (PHOTO: AHMAD GHARABLI/AFP)

The heroes: Protectors of the funeral and coffin

Let’s imagine for a second the brutality with which young Jerusalemites and non-Jerusalemites who carried Shireen’s coffin on their shoulders were beaten. Let’s imagine the thick batons that the (Israeli) police used to beat them. Let’s imagine the poisonous gasses that polluted the air of the funeral, the filthy wastewater that contaminated the area, on a sanitary level, since it was in the vicinity of a hospital, as well as on an ethical level, since it held the body of a martyr.

It is not only the brutal image of the occupation and its crimes that would remain engraved in our minds, nor just the pictures of the funeral, nor just the pictures of the young men who climbed the walls of the Old City, but the pictures of the heroes who could not care less about their lives, and insisted on reaching the site of Shireen’s martyrdom, with journalist Shatha Hanaysha, whom they saved from a certain death. They managed to take Shireen to a hospital despite the intensity of the murderers’ bullets at the site. These young men, although not fighters, have turned into heroes in everyone’s eyes. Is there an act higher than the sacrifice they have made? 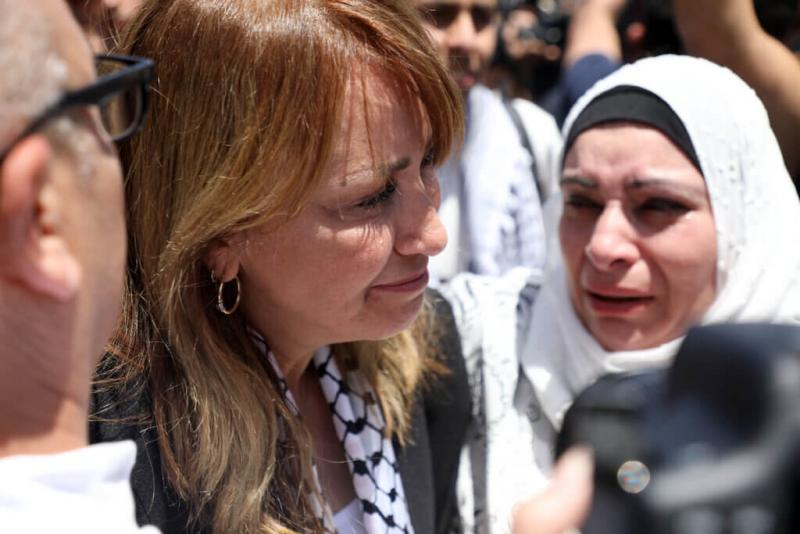 About those heartbroken by the death of a friend, colleague, sister and journalist, about their bravery to continue to report, pictures and news, despite their great loss, and about their heavy tears as they covered the news, and about their coherence in the funeral, during the burial procession, and in funeral homes. It was as if they had agreed to postpone their grief until after they finished their duty of covering (the news) in a way that their colleague Shireen deserved. They continued their coverage for five days, covering not only the funeral route and the ceremony, but also the news of Palestine – specifically, the raids against the Jenin refugee camp on the day of the funeral.

All of these friends concurred that Shireen had honored them with her friendship, and that their loss was great and very painful; to Shireen they were family, and at the same time Shireen was family to them. The impact of her loss was enormous, a great silence ensued, and their eyes reflected the entire sadness of this tragedy. But the determination of Shireen’s colleagues and friends to take part in her farewell from Jenin to Jerusalem, through all the cities and towns, to commemorate her, and the continued talk of her, gave them the strength to cope with the shock of her departure.

Her brother Antoine, his wife Lisa, son Nasri and daughters Lena and Larrain

Antoine, the brother who received the news of his sister Shireen’s injury, and then her martyrdom, via breaking news thousands of miles away from Palestine, for him to begin the risky return journey from Somalia, where he works with the United Nations, which was under complete closure due to general elections, he had to travel most of the distance to the airport on foot and reached it without a ticket or any preparation to travel in the times of Covid-19 and its procedures. On board, he saw everything happening in Palestine, he saw the Israeli police storming his home in Beit Hanina, he had to experience a thousand thoughts all while also experiencing this overwhelming sadness.

An only brother loses his only sister, his two daughters and son lost their only aunt, they were deprived of an aunt; Antoine’s wife, Lisa, lost her sister-in-law, her friend and her sister. What brutality is this?

What consoles Antoine, Lisa and their children is that Shireen regained the Arabism of Jerusalem, she united Palestinians, restored the spirit of international solidarity with Palestine, and redirected the compass to its rightful place. Shireen conjured Palestine up with her death, and this may be a consolation for her small family and for all of us.

Shireen’s greatest passion was to expose the crimes of the Israeli occupation in Palestine, and through her work as a journalist, she exposed murders, confiscations, Judaization, repression, and racial discrimination. She was always face-to-face with the Zionist narrative, exposing its lies and claims. I do not want to go into the mazes of the investigation, nor the identity of who is behind the murderer, or the justifications they gave to media, let alone their ghastly confusion, their attempt to confuse the world’s public opinion in turn, the ensuing obfuscation, and so on.

There is a known murderer with a name and a commander, the commander has a higher commander, and the higher commander reports to a political official, all of whom decided on the 11th of May, 2022 to continue to shed Palestinian blood. Those behind the crime are the occupation authorities who sent their special forces to practice what they do best: killing Palestinians wherever they are, regardless of profession. Over time, the occupation has killed journalists, lawyers, doctors, children, young men, and women, without being prevented by any taboos. I repeat that there is a known murderer, and when the occupation ceases to carry out daily killings in villages, cities and refugee camps in Palestine, it will lose its raison d’être.

The departure of journalist Shireen Abu Akleh entails a lot of work that the Palestinian Authority and Palestinian and international human rights institutions have to do to expose the practices of this occupation. The forces of political and civil society have a lot of burdens to bear in order to maintain the momentum of solidarity that the departure of martyr Abu Akleh has left, an unprecedented international solidarity that must be preserved, observed, developed, and supported.

Khaled Farraj is the Director General of the Institute for Palestine Studies.

Tarek Taha
A Criminal Running after a Chasing Ghost

Lama Ghosheh
The Coffin Did Not Fall: Behind the Scenes

Hind Shraydeh
Who Will Bring Back our Female Comrades?

Ghada al-Madbouh
Resistance Repressed: When a Living Dead Is Reborn

Maher Charif
She Was More than a Woman, She Was a Role Model That Was Assassinated