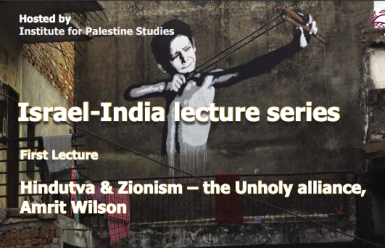 The new Indo-Israel relationship has at its core an ideological bond between Hindutva – a far right Hindu fascist movement and Zionism.  This ideological alliance is openly promoted by Israeli diplomatic missions in India.  The impact of the new alliance in India is seen through the unleashing of draconian legal and political repression, in particular: the ethnic cleansing of Christians; demolition of mosques and mass  lynching of Muslims; and gagging of the media. This also takes place in Jammu Kashmir, where Israeli strategies, tried and tested on Palestinians, are being implemented in Kashmir.

This is the first event of the Israel-India lecture series.

Amrit Wilson is a founding member of South Asia Solidarity based in Britain, which for more than two decades has been at the forefront of organizing international solidarity for the people's movements fighting Hindu-supermacy and facism in India. She is a writer on issues of race and gender in Britain and on the strategies of imperialism and anti-imperialist resistance. Her books include Finding a Voice: Asian Women in Britain (Virago, 1978) which won the Martin Luther King Award and has been republished in an extended form in 2018 by Daraja Books, The Threat of Liberation: Imperialism and Revolution in Zanzibar (Pluto Press 2012) and US Foreign Policy and Revolution: The Creation of Tanzania (Pluto Press 1989). She has also writen extensively on the increasing growth of Hinduvta as a global force and its similarities with Zionsim.

Virinder Singh Kalra’s academic work examines the multiple ways in which culture is used as the basis of peoples' resistance to hegemony.  In South Asia the boundaries between India and Pakistan are weakended through the practices of musicians and writers, which is central to his book Sacred and Secular Musics, Bloomsbury Press. In this text he engages a postcolonial analysis with the field of ethnomusicology, forwarding the role of the native musician as the interpreter and conveyor of religious texts. This inverts the normative accounts of musicians in South Asia which place them at the bottom of the social hierarchy and also of religious hierarchy in which texts are given a superordinate role. The wide range of his academic work is underpinned by an account of processes of resistance through the gambit of cultural and political organising, demonstrated most recently in the co-authored book Beyond Religion in India and Pakistan (Bloomsbury, 2019), which highlights the porous boundaries of shrine worship compared to the rigid boundaries of religious identity.