What lies beyond our despair⁠—our insistence on defending life until the very last second⁠—remains undefeated.
–Elias Khoury

We are pleased to announce the release of the latest issue of the Journal of Palestine Studies, featuring notable essays by the novelist and public intellectual Elias Khoury and the distinguished historian and author Eve M. Troutt Powell. Khoury’s meditation on language and the ongoing Nakba guides readers to an understanding that the past is not over and that the present is history, while Troutt Powell’s review essay of Mahmood Mamdani’s Neither Settler Nor Native: The Making and Unmaking of Permanent Minorities cautions against writing women, poets, and other insurgents out of empirical scholarship on settler colonialism. Both featured essays are free to read.

We are also pleased to continue our series of reflections on the current Palestinian moment with pieces ranging from the first appointment of a Palestinian woman captain in the New York Police Department to the ways in which Gaza is being consolidated as a military front in an effort to counter the fragmentation of the Palestinian territories. 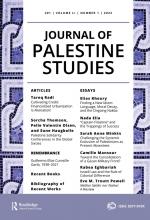