Two Cities Across the Bay: Haifa and Akka’s Entangled Histories

The lights, emanating from the neighboring coastal city of Haifa, descend along Mount Carmel’s steep contours, washing into the Mediterranean Sea, and eventually reaching Akka’s shores. This is the extent of Akka and Haifa’s geographical proximity: a proximity that shaped the two coastal cities’ modern histories, at once entangling them and sending them off on divergent trajectories.

Of the many epics and legendary sagas that unfolded on the bay’s shores, the resonances of one particular episode in its modern history remain alive: Napoleon’s defeat. In 1799, following his occupation of Egypt, Napoleon marched with his French troops and laid a two months’ siege on the fortified city of Akka. Realizing that their defeat could result in a massacre, the armies of Jazzar Pasha, Akka’s ruler, and the residents of the city, withstood the siege. Left starved and fatigued, Napoleon’s forces had no choice but to retreat. The sobering episode was a turning point in the French colonial campaign in Egypt and Syria. It thwarted Napoleon’s fantasy to reign as “emperor of the East” and his ambition to “return to Paris by way of Constantinople.” 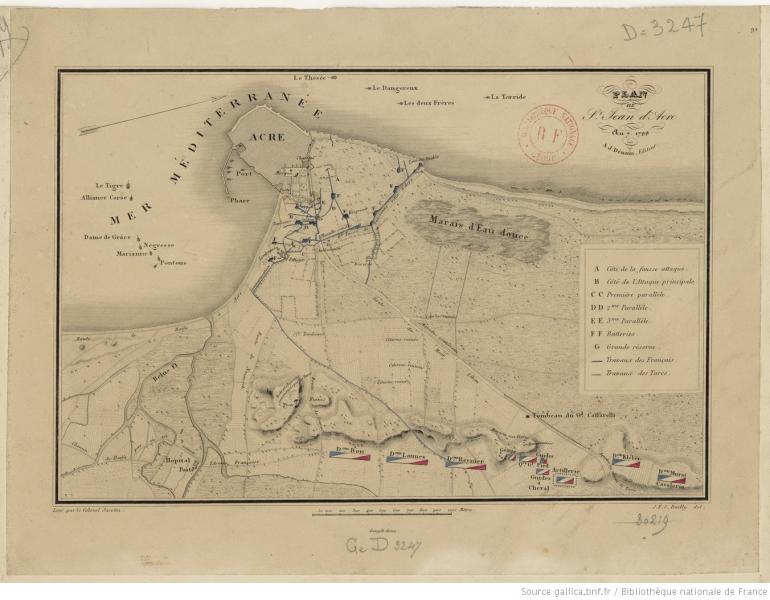 Akka’s initial resurgence following Napoleon’s assault was short-lived. In 1831, Ibrahim Pasha, son of Muhammad Ali of Egypt, invaded Akka and razed its fortifications to the ground. The invasion sealed the city’s future against any potential recovery. Even after the Egyptian occupation ended in 1840, the city would never regain its prominence as a primary Eastern Mediterranean port. New factors contributed to Akka’s state of decline. Until the nineteenth century, Akka’s economic prosperity was contingent on quasi-autonomous rulers who held a tight grip over the agricultural surplus of Greater Syria’s fertile interior, especially Galilee cotton. The nineteenth century disturbed the arrangements of this ancien regime of governance. Ottoman centralization impeded the emergence of autonomous local governors and Greater Syria’s hinterlands were increasingly integrated into the world economy.

Akka’s decline in the nineteenth century was not shared by neighboring coastal towns. The greatest competitor was Beirut, a port city that was witnessing exponential growth, earning the status of an Ottoman provincial capital by 1888, and administering a vast territory extending from Latakia to Nablus. But even closer to Akka, across the bay, Haifa was gradually emerging as a principal rival port city. Like Beirut, Haifa profited from Akka’s economic and political decline following the Egyptian occupation. Natural conditions, too, worked in its favour. Haifa’s sandy beaches rendered its harbor more suitable for receiving large steamships than the shallow and rocky reefs of Akka and Jaffa. This fact was not lost on Zahir al-‘Umar, the Arab ruler of northern Palestine in the mid-eighteenth century, who had already established a harbor there, redirecting an increasing amount of maritime traffic from Akka to Haifa. But it was not until the nineteenth century that Haifa truly surpassed Akka as the flourishing port city of northern Palestine. By the turn of the century, international shipping companies opened regular shipping lines connecting the Mediterranean to the Indian Ocean with Haifa, not Akka, as their main stopping point.

These developments invited substantial growth in Haifa’s commercial, industrial, and logistical sectors. They also stimulated its rapid urbanization. Newcomers arrived to the city from all over Palestine and the Arab region for work, earning it the epithet: umm al-‘amal, or ‘mother of work.’ The city’s structures and public spaces vividly engendered this process of urbanization. By the late 1850s, new houses were built outside the city’s walled boundaries, on the slope of Mount Carmel. The city’s potential for modernization rendered it particularly susceptible to foreign colonial investment and settlement. The German Colony, established in 1868 by Templar Protestants, left a lasting imprint on Haifa’s architecture and infrastructures. But the local population, too, played an instrumental role in the city’s modernization. Throughout the late-nineteenth and early-twentieth centuries, local residential and commercial construction, primarily led by the Haifa’s elite Christian and Muslim families, pushed the city outwards towards the modern quarters in Wadi Salib and Wadi al-Nisnas. 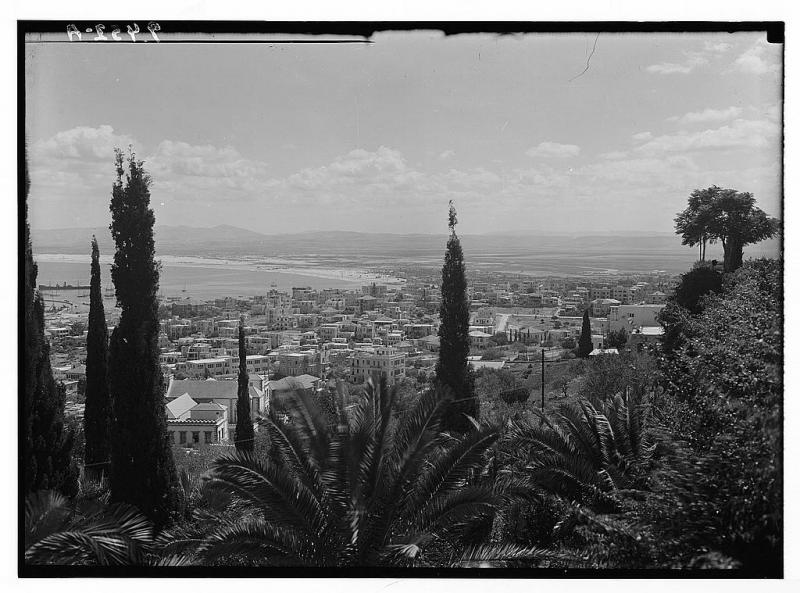 In contrast with Haifa’s urban expansion and drive towards modern development, Akka remained a walled city confined to its historic boundaries until the end of Ottoman rule. This curious fate, which distinguished Akka not only from Haifa, but also from all other Eastern Mediterranean coastal cities, was a direct product of the Sublime Porte's prevention of building activity outside its fortifications. The decision was primarily militaristic, possibly a consequence of the enduring memories of the Napoleonic and Egyptian invasions. Although it hindered the city’s economic growth, it was paradoxically justified by Akka’s strategic importance as the district capital. In some measure, Haifa’s urban expansion and Akka’s urban confinement were the physical embodiment of the expanding wedge between the two cities that had already been in the making for a few decades. It reinforced the idea that Akka was the city of the past, while Haifa was the city of the future. 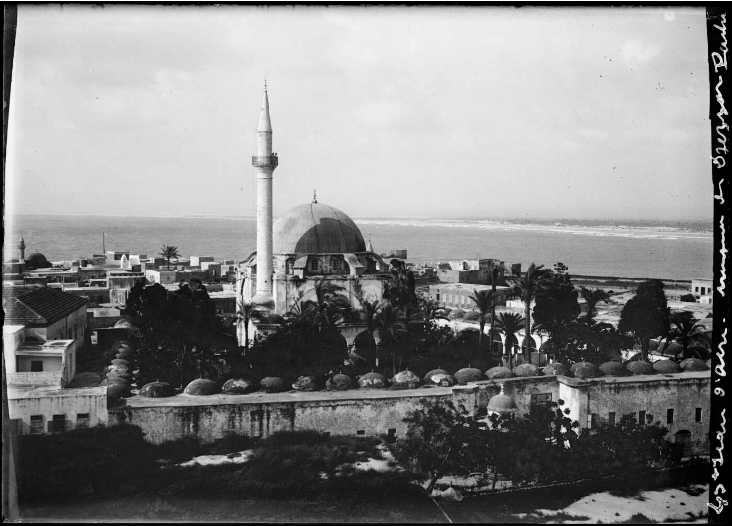 One artefact stood as a vivid embodiment of this idea: the monumental Hejaz Railway station in Haifa. Completed in 1905, the railway was the main connection that linked Greater Syria’s interior with the Mediterranean world. Several iterations had been prepared for the railway line since the 1860s, a direct outcome of the numerous stakeholders involved in its construction, including the Ottoman state, European investors, and the Lebanese Sursock family, who owned large swathes of land in the Jezreel Valley. Importantly, earlier schemes marked Akka, not Haifa, as the line’s main coastal station. Haifa’s eventual selection was formally justified on the basis of the flat topography of the Haifa-Deraa route. However, it was no secret that the growing schism between the two cities’ positions vis-à-vis regional interests and global economies played an equally crucial role. Although Akka maintained its official status as the district capital until the end of Ottoman rule, Haifa’s modern developments increasingly positioned it as the de-facto capital of northern Palestine. 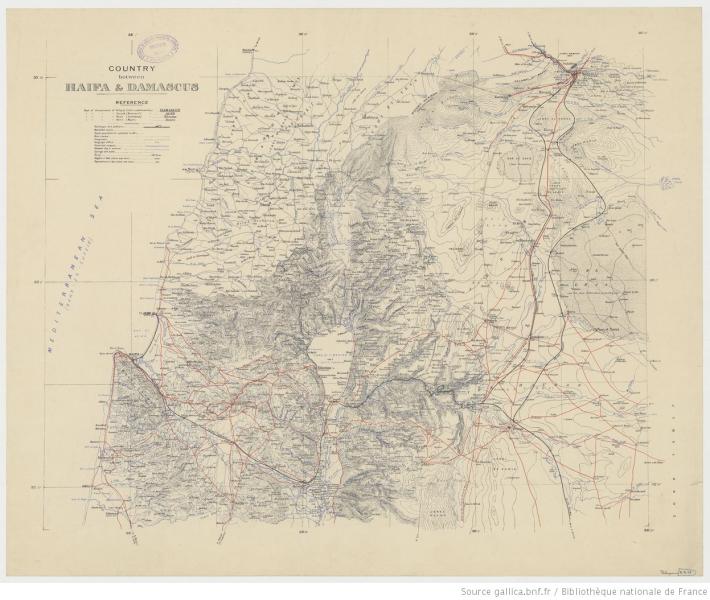 Haifa’s administrative subordination to Akka remained a controversial matter until World War I. In 1914, an official Ottoman survey of Wilayet Beirut, which both cities were part of, dedicated an entire section to the conflict over Haifa and Akka’s administrative relations. The survey echoed the voices of the two cities’ inhabitants regarding this rift. Haifa’s inhabitants explicitly demanded that the seat of the district be moved from Akka to their city, explaining that further investment in a “commercially dead” and “lesser populated” city was no longer justified. Akka’s population rejected this scheme. They saw Haifa’s economic boom not as a benefit to its local inhabitants, but rather, to foreign groups, particularly Christian missionaries and Jewish colonists. “Haifa thinks of itself as a home to every tourist and group in the world, and it does not have a national character.” These exaggerated assessments were inasmuch products of difference as they were products of proximity. The image of each city was a mirror of its own material realities, as it was a projection of its counterpart across the bay.

The bay’s shores were the main arena for Akka and Haifa’s unravelling developments and rivalries. Nonetheless, it was the bonds that connected the two coastal cities with their interior regional geography that molded their status within the Mediterranean world. These bonds were frequently mapped onto imperial and colonial geographies. However, their legacies did not always correspond with colonial visions for the region’s future. The connections between Palestine’s coast with the Arab East were equally significant in forging regional relations that formed the basis for the Arab cultural and economic nahda (‘renaissance’) of the late-nineteenth and early-twentieth centuries. These relations were heavily interrupted in the 1948 Nakba, when Akka and Haifa were cut off from their natural connections to the broader geography of the Arab region. Bearing witness to these legacies, generations of Palestinians in those cities have since fought against colonial attempts to erase their history. They, along with the two cities themselves, continue to remind us of the material worlds that were possible before this rupture.

Nadi Abusaada is an architect and historian. He is currently an Aga Khan Postdoctoral Fellow at the Massachusetts Institute of Technology (MIT). Nadi completed his Ph.D. and M.Phil. degrees at the University of Cambridge and his B.A. at the University of Toronto. His writings have been featured in a number of international publications including The Architectural Review, The International Journal of Islamic Architecture, and the Jerusalem Quarterly among others.