The battle was fought by Palestinians everywhere as one, their unity like a raised fist, with the support of freedom-loving people everywhere, including the Arab world.
–Palestinian political prisoner Abdel Razeq Farraj

We are pleased to announce the release of the latest issue of the Journal of Palestine Studies, the last in our fiftieth anniversary volume, which features a comprehensive survey of anthropological scholarship on Palestine by Editorial Board member Sa’ed Atshan. The article examines English-language intellectual engagements by sociocultural anthropologists on Palestine and/or Palestinians from 2011 through the present. This article, along with a review of the triple award-winning Waste Siege: The Life of Infrastructure in Palestine by Sophia Stamatopoulou-Robbins (also an anthropologist), is free to all readers until the end of 2021.

We are also excited to introduce the inaugural collection in an ongoing conversation that reflects on how the Palestinian people are nurturing the struggle for liberation and envisioning the future. The essays in this issue, introduced by coeditor Rashid Khalidi, speak to the outbreaks of revolt throughout historic Palestine that have been variously dubbed the Unity Intifada/Uprising and the Sword of Jerusalem. 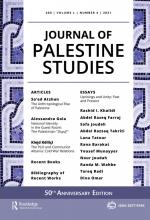