Stamatopoulou-Robbins, Waste Siege: The Life of Infrastructure in Palestine 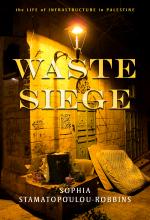 Raw sewage and burning trash; mountains of debris from demolished homes and construction sites; piles of broken phones, flip-flops, and defective household goods; toxic chemicals, industrial runoff, informal dumping, and settlement refuse; bags of moldy bread hanging from walls. These and other forms of waste accumulate in and around Palestinian cities, villages, and bodies, forming what cultural anthropologist Sophia Stamatopoulou-Robbins calls a “waste siege.” While most studies of contemporary Palestine center repressive violence, forced displacement, military occupation, and political negotiations, Waste Siege: The Life of Infrastructure in Palestine focuses on everyday life in zones of abandonment where Palestinians attempt to navigate and manage the accumulated detritus of colonial capitalism.

Drawing on ten years of ethnographic research based primarily in Jenin and Ramallah/al-Bireh, Stamatopoulou-Robbins provides a visceral and theoretically sophisticated guide to the disposability, toxicity, and ethical dilemmas that Palestinians confront in the West Bank today. At the same time, Waste Siege offers a “metaphor for a dying planet” (p. xi) by highlighting the destructive accumulation and uneven distribution of waste as well as the creative ways that people live among ruin. In doing so, she emphasizes tensions, uncertainty, and gray zones over simple assertions of responsibility.

The first two chapters focus on dilemmas associated with the influx of low-cost, low-­quality consumer goods to the West Bank. Mass consumption generates tons of garbage that must be disposed of. With donor funding and Israeli permission, the Palestinian Authority (PA) built two landfills in the West Bank. But this obsolete, low-tech solution has short temporal horizons and opens the PA to challenges related to land ownership and property values. Moreover, Israeli authorities force the PA landfills to accept trash from Israeli settlements, legitimizing colonization while shortening the life of the landfills. At the same time, Palestinian consumers navigate between a formal market awash in quickly deteriorating, low-cost imports and an informal rabish (rubbish) market specializing in secondhand goods discarded by Israelis. The former has an air of newness undermined by suspect quality, while the latter generates a sense of dirtiness and shame negated by an emphasis on the quality of the craftsmanship and an assertion of national pride because, as one respondent explains, “Arabs don’t throw perfectly good things away” (p. 90).

Chapter 3 examines the indeterminacy of responsibility for addressing the “wastescape” (p. 107). Palestinian residents of a village overwhelmed with accumulated waste address their complaints to the PA rather than Israel. By holding the PA accountable, Stamatopoulou-Robbins argues, “the villagers made the Authority their government, giving it on-the-ground traction despite its failures” (p. 123). Through appeals for intervention, Palestinians treat the PA as a “phantom state” (shibih dawla)—a nonsovereign entity upon which people place their hopes despite its consistent shortcomings (p. 135). Stamatopoulou-Robbins suggests that the combination of abandonment and fleeting efforts to govern by state-like actors is increasingly common.

In chapter 4, Stamatopoulou-Robbins traces the ethical dilemmas associated with the disposal of bread, which is considered sacred in Palestinian society and cannot be thrown away. Before the Nakba, villagers would reuse old bread, feed it to animals, or share it with neighbors. But forced displacement and urbanization, growing unease around food aid, and new bread-making processes have undermined the existing infrastructure for using and circulating unwanted bread. Rather than throwing their bread away, Palestinians hang bags of old bread from doorknobs, light poles, dumpsters, and walls in the hope that someone will use it. These potential gifts demonstrate a collective willingness to share and an aspiration for connectedness. But, as Stamatopoulou-Robbins notes, “The injunction against discarding bread puts municipal garbage workers in a particularly tricky situation” (p. 146).

The last chapter examines the tangled politics of sewage disposal. Israeli authorities prevent the PA from building sewage networks and water treatment plants, yet they hold the PA responsible for sewage leaks that threaten what the Israelis call a “shared environment” (p. 176). While the notion of a “shared environment” may sound progressive, in the settler-colonial context it aligns with assertions of Israeli sovereignty throughout historic Palestine. Without permission to treat and reuse Palestinian wastewater, PA water engineers are forced to participate in cross-border schemes to demonstrate their capability and their concern for the environment in ways that are legible to Israeli and international actors. In doing so, they are also compelled to apologize for sewage flows they know are not their responsibility.

Grounded in the anthropology of waste, the state, the environment, and infrastructure, Waste Siege is a theoretically rich, ethnographically grounded, beautifully written exploration of the “kind of living we do in the constantly changing ruins we have made” (p. 222). The winner of the Middle East Studies Association’s Albert Hourani Book Award, Waste Siege will be of great interest to all concerned with daily life in Palestine, climate catastrophe, infrastructures of waste, and the disastrous intersection of settler colonialism and contemporary capitalism.

Andy Clarno is associate professor of sociology and Black studies at the University of Illinois, Chicago and the author of Neoliberal Apartheid: Palestine/Israel and South Africa after 1994 (Chicago: University of Chicago Press, 2017).