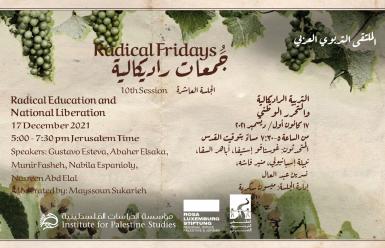 Over the span of 12 months we have organized 9 webinars bringing together experiments in radical education from Palestine with the aim to explore, unfold, and show these experiments to the world through the live webinars but also archiving them to inspire more such experiments in the future. This tenth session to be organized on 17 December 2021 will reflect back on these experiments and try to explore the different possible worlds that can be revealed by radical educational ideas and practices as part of a political commitment to the fight for justice, equality and liberation. This does not imply a simplistic notion of education as a means to bring about political ends, but rather reflects the idea that in radical education, politics and learning come together in an inter-connected web of means, ends and relationships. We aim here to reflect on how radical education can challenge some of our fundamental ideas about education, politics and social change, and how it can uncover the roots and foundations of a problem or a project like schooling. How can radical education help widen our political imagination to challenge oppressive structures and relationships? We have been living under the dictatorship of no alternatives, and when we talk of alternatives in education, we are too often addressing only alternative ways of teaching the same dominant discourses.

Since our basic premise continues to be that there is no single form of radical education, we will host in this tenth webinar 5 speakers from different contexts to share their insights and experiences of how might radical education help create a more just world, and how Palestine and the Palestinian struggle can be at the heart of this new imagination.

Gustavo Esteva: Grassroots activist, independent writer and public intellectual, he has authored more than 40 books and many essays and articles. He received the National Award of Economics and of Journalism, in Mexico, and an honorary PhD in Law from the University of Vermont. Columnist of La Jornada and The Guardian, Esteva is also advisor to the Zapatistas in their negotiations with the government. He lives in a small village in Oaxaca and collaborates with Centro de Encuentros y Diálogos Interculturales and Universidad de la Tierra en Oaxaca, which he helped design and create.

Abaher El-Saka: Associate Professor, Department of Social and Behavioral Sciences at Birzeit University, he carries a PhD in Sociology from the University of Nantes – France. He worked as a lecturer at the University of Nantes from 1998-2006, and a visiting professor at several French and Belgian universities from 2009-2020. He has authored many scientific studies and articles in the fields of socio-artistic expressions, social movements, identity, memory, nationalities, urban studies, social sciences and their history. He is currently working on writing the social history of Gaza City.

Munir Fasheh: Born in Jerusalem, Palestine in 1941; he studied and taught math for many years; got his doctorate from Harvard in education and worked in Birzeit University. During the first Palestinian intifada (late 1980s), he left academia and established Tamer Institute for Community Education. In 1997, he established the Arab Education Forum within Harvard University’s Center for Middle Eastern Studies.

Nabila Espanioly: is a feminist and peace activist who founded the Pedagogical Center and Multipurpose Women’s Centre in Nazareth (Al-Tufula) in 1989 and has served as its director since then. She has an M.A. in Psychology from Bamberg University, Germany and a B.A. in Social Work from Haifa University. Nabila has written and edited several books and articles on early childhood care and development, as well as general social and political issues related to women.

Nasreen Abd Elal: is a multidisciplinary graphic designer, illustrator, and researcher. Her work centers on the intersection of graphic design and justice-oriented movement work. She is a team member of Visualizing Palestine.

Moderator: Mayssoun Sukarieh: is a Senior Lecturer at the Department of International Development at King’s College, London.