A major concern among the Palestinians who signed the Oslo Accords was the future status of Jerusalem and the fate of Palestinian institutions that had evolved over the years under Israeli rule. A pledge was made by the Israeli government in October 1993, under pressure from the European governments who were keen for the success of the accords, to guarantee the right of Palestinian institutions in Jerusalem to function freely. Facts on the ground tell a different story. The current issue of the Jerusalem Quarterly brings to you a new batch of articles, essays, and a larger selection than usual of reviews of books and exhibits.

In closing, the Jerusalem Quarterly mourns the dear friend and contributor Dr. Vicken Kalbian (1925–2021), the veteran Jerusalem physician, renowned cardiologist, and local historian. JQ will miss his insightful thoughts on elements of the history of Jerusalem during the closing years of Ottoman rule and the period of the British Mandate. His contributions not only brought light to rarely studied themes, but also served as a reminder of the important role played by members of the Armenian community in the city. An obituary can be found of page 10 of the current issue.

JQ 87 is now available online and in paper form. 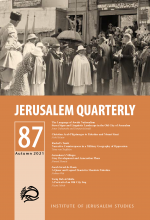