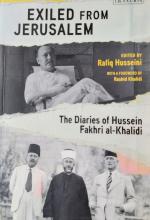 Hussein Fakhri al-Khalidi was a Palestinian doctor and a leading figure in Palestinian politics during the British Mandate period. He served as mayor of Jerusalem from 1934–37, helped to found the Reform Party, and represented that party in the Arab Higher Committee. In 1937, the British government exiled him to the Seychelles for his political activities, and eventually released him in spring 1939. While in exile, al-Khalidi wrote a daily diary in English. Edited by Rafiq Husseini, and including an introduction by Rashid Khalidi, the diary has now been published for the first time. What follows is a review- essay on this important new historical source.

Laila Parsons is professor of modern Middle East history at McGill University, Montreal. She is the author of The Druze between Palestine and Israel, 1947– 1949 (Basingstoke, UK: Macmillan, 2000), and of numerous articles on the 1948 war, the interwar period, and the place of narrative and biography in Middle East historiography. Her most recent book The Commander: Fawzi al-Qawuqji and the Fight for Arab Independence, 1914–1948 (New York: Farrar Straus and Giroux, 2016) received the 2017 Palestine Book Award and the Society for Military History’s 2017 Distinguished Book Award.