Palestinians in the United States and Canada 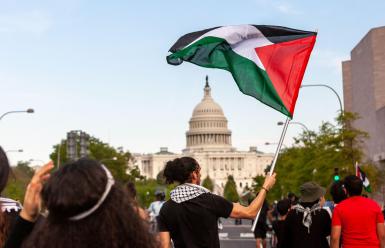 Led by Dr. Louise Cainkar, the preeminent scholar of Arab American studies and of Palestinian communities in Chicago, this panel seeks to remedy what Cainkar calls the “predicament of obscurity” that has characterized scholarship on the Palestinian diaspora in the United States and Canada. Panelists Loubna Qutami, Chandni Desai, and Loren Lyberger will expand on the research and insight presented in their respective articles published in a special issue of the 50th volume of the Journal of Palestine Studies.

These scholars add their voices to the literature--the result of decades of silencing and marginalization both inside and outside of the academy--on the freedom struggles of Palestinians in the United States and Canada and on the ethnographic changes taking place within Arab American communities.

Louise Cainkar: professor of sociology and social welfare and justice at Marquette University, where she won the 2021 Marquette University Community Engaged Teaching Award. She also directs the major in peace studies and minor in Arab and Muslim American studies. She has published widely on Arab Americans and Muslim Americans. She is the author and co-editor of multiple books including Sajjilu Arab American: A Reader in SWANA Studies, with Pauline Homsi Vinson and Amira Jarmakani, forthcoming from Syracuse University Press and Arab American Women: Representation and Refusal  with Suad Joseph and Michael Suleiman. She is a past president of the Arab American Studies Association and board member of the Association for Middle East Women’s Studies.

Loubna Qutami: an assistant professor in the department of Asian American studies at the University of California, Los Angeles. Qutami was a co-founder of the Palestinian Youth Movement (PYM) and the former executive director of the Arab Cultural and Community Center (ACCC) in San Francisco.

Chandni Desai: an Assistant Professor at the University of Toronto. She is working on her first book tentatively titled Revolutionary Circuits of Liberation: The Radical Tradition of Palestinian Resistance Culture and Internationalism. She has written articles on Palestinian resistance culture, Palestinian oral history, memory and archives, and settler colonial economies and resurgent solidarities in the Journal of Palestine Studies; Race and Class; Curriculum Inquiry; Decolonization: Indigenitgy, Education and Society and has contributed to several anthologies including An Oral History of the Palestinian Nakba. She co-edited a special issue on decolonization and Palestine for the journal Decolonization. Desai also hosts the Liberation Pedagogy Podcast.

Loren D. Lybarger: Professor of Classics and Religious Studies (Islamic Studies; comparative religions) at Ohio University, Athens. He is the author of Religion and Identity in Palestine: The Struggle between Islamism and Secularism in the Occupied Territories (Princeton, NJ: Princeton University Press, 2007) and Palestinian Chicago: Identity in Exile (Oakland, CA: University of California Press, 2020). He is also a co-author of the forthcoming book, Commemorative Literacies and Labors of Justice: Resistance, Reconciliation, and Recovery in Buenos Aires and Beyond (London: Routledge, 2021).