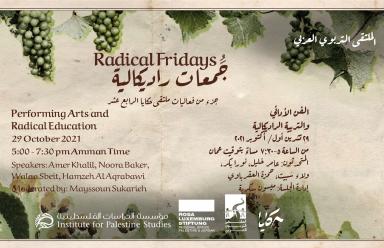 This webinar entitled “Performing Arts and Radical Education” will explore four pioneering experiments in storytelling, dance, music, and theatre that claim a wider, more democratic definition of creativity and the capacity of art to intervene in social and political change as well as in the national project for Palestinian liberation.

Amer Khalil: Born in Jerusalem in 1964 where he currently resides, Amer joined Al-Hakawati Theater Group at an early age in 1980 and received intensive training led by the Group’s Director, the late Francois Abu Salem and other Arab and non-Arab artists. Between 1988 and 1991 he moved to France and worked closely with many theater groups as a “resident artist”. He loves singing and music and is currently the director of the Palestinian National Theatre (Al Hakawati) in Jerusalem.

Noora Baker: is a performer, creator and a dancer and member of El-Funoun Dance Troupe since 1987, also a co-founder and member of CACUTS performance art collective since 2012. She is the Head of Production at the Troupe, choreographing and directing different productions. She graduated with distinction from Goldsmiths University of London, MA in Performance Making and BA in Business Administration from Birzeit University.

Walaa Sbeit: Originally from Iqrit village, born in Haifa, Walaa is an artivist active in the educational and social fields He received his BA in theatre arts, sociology, conflict resolution and the culture of peace from Boston, USA, and an MA in applied theatre: drama in education from London-UK. He established several local and international art projects such as ministry of Dabkeh group in Haifa and 47SOUL music group in Amman and London.

Hamzeh al-Aqrabawi: Palestinian farmer interested in collecting folklore and popular heritage pertaining to daily life in Palestine including proverbs, songs, and popular beliefs. He organizes tours around Palestine connecting people to their land using geo-stories and stories about people and places.

Moderator: Mayssoun Sukarieh: is a Senior Lecturer at the Department of International Development at King’s College, London.