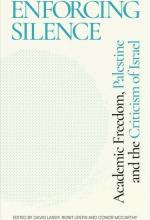 For a long time in the academy, the elephant in the room was the question of Palestine, and it is the Palestinian-led Boycott, Divestment, Sanctions (BDS) movement that helped that elephant appear. The academic boycott, inspired by persistent resistance in Palestine, has played a major role in challenging censorship of Palestinian struggles and interrupting the dominant consensus about Israel and Zionism in the university in the United States, as well as in the United Kingdom (UK). Yet systematic assaults on academic freedom have undermined solidarity with Palestinian scholars and students living under lockdown, as has the “weaponizing of antisemitism” against critics of Israel, lawfare, blacklisting, and defamation (p. 15). Enforcing Silence is a much-needed intervention in debates that have long raged about academic freedom in relation to the Palestine question and academic boycott. It provides a thoughtful critique of the usefulness of a liberal notion of academic freedom from a variety of disciplinary and geographic locations.

This edited volume emerged from a 2017 Irish conference on the academic boycott—itself a case study of battles over whose academic freedom is protected. It offers three major contributions to the small but growing body of scholarship on the BDS movement and academic censorship related to Palestine/Israel: rigorous, deeply theoretical analyses of notions of academic freedom and freedom of speech embedded in material and political contexts in the university and on the ground in Palestine; a structural approach to academic repression and academic governance in the privatized university (p. 14), exploring how the crisis of academic employment compounds the precarity of scholars who dare to challenge the Israeli state; and an international perspective—broadening the discussion to include case studies from the UK, Ireland, Australia, Israel, and Arab universities. Considering the right to boycott from the vantage point of Arab higher education is a unique contribution and demonstrates how charged the question of academic boycott is, even in Arab states such as Lebanon (chapter 4) that presumably oppose normalization of relations with Israel. Palestine continues to be a thorn in the side of regimes of state power, and the chapters highlight this dissensus that pits people against the alliance of the neoliberal university and state.

Furthermore, several of the authors use an intersectional approach to issues of academic discipline vis-á-vis Palestine. As the editors note, the university is governed by “capitalist elite cultures of obedience” (p. 27) that operate differentially in relation to “class, discipline, race, gender, and ideology” (p. 26). Several of the chapters examine the case of Palestinian American scholar Steven Salaita, who was fired from the University of Illinois at Urbana-Champaign, and implicitly or explicitly acknowledge the ways in which racial or national identity is also an important factor in the unevenness of “academic privilege” (pp. 3, 20). While many chapters address how class inflects the vulnerability experienced by academics due to the expansion of adjunct labor and the “discretionary exercise” of institutional power (p. 81), they do not sufficiently address the question of gender. Yet “scholastic or intellectual capital” (p. 94) is deeply gendered and racialized—including in Palestine studies—and notions of civility and belonging in the academy are often expressed through anxieties about the “angry Arab/Muslim male” or “victimized Arab/Muslim female” scholar.

The role of religion is more explicitly addressed, particularly in C. Heike Schotten’s incisive analysis of how discourses of academic freedom and “civility” are intertwined with the demonization of Islam, Muslims, and Palestinians/Arabs in the “War on Terror” and in U.S. and Israeli counterterrorism regimes (chapter 11). The editors point to the current context in which far-right and neo-Nazi groups target Muslims, yet “U.S. and European politicians privilege antisemitism . . . above Islamophobia” (p. 15). Current discussions of white supremacy spurred by the regime of former U.S. president Donald Trump and white-nationalist populism globally need to be connected more explicitly to Zionism as a racial, settler-colonial ideology.

Significantly, many of the authors focus on how academic freedom is embedded in vectors of power shaped by colonialism, especially settler coloniality in the United States and Israel (p. 27). The anti-colonial perspectives offered by Yara Hawari, Ronit Lentin, Jeff Handmaker, and Schotten are crucial, and connect this book to work in settler-colonial and Indigenous studies reshaping dominant discourse on Palestine. Schotten demonstrates how “academic freedom in the post-9/11 academy” is based on the “moralizing discourse of settler colonial eliminationism” (pp. 289, 296) that taints Palestinian/Muslim scholars or supporters of Palestinian liberation as “terrorist” threats; hence, the expulsion of Salaita and—though much less discussed—Sami Al-Arian from the U.S. academy. Hawari powerfully argues that the academic boycott must be accompanied by epistemic decolonization, for Palestinian/Indigenous knowledge production has been undermined or actively destroyed by Zionist policies such as the targeting of Palestinian archives or revisionist work by the Israeli New Historians. Hawari frankly discusses how issues of positionality and power have marginalized Palestinian academics and privileged certain Israeli scholars, including at academic conferences, adding to the analysis of institutional politics and precarity an important, though until now largely missing, Palestinian perspective.

This book offers a valuable linkage of Palestine studies to the field of critical university studies from a global perspective. The neoliberalization of the university—whether in the United States, the UK, Ireland, or Lebanon—is key to understanding the politics of the boycott in a transnational circuit of academic repression driven by privatization of higher education as well as surveillance and censorship in collaboration with states. Writing from Australia, Nick Riemer rightly points to the “utility of Zionist complaints as a tool of campus-level social control” (p. 79). I was particularly struck by Hilary Aked’s use of Freedom of Information Act requests as a methodological tool to track financial and political links connecting Israel studies in the UK, the Brand Israel campaign, and counterterrorism programs to academic hiring and private philanthropy.

This book is a thoughtfully curated and insightful collection of essays that will give scholars, students, and activists important lines of analysis to counter enforced silence—much needed at a moment when the elephant is, thankfully, no longer encaged.

Sunaina Maira, professor of Asian American Studies at University of California, Davis and a Mellon/ACLS Scholars and Society Fellow in 2019–20, is the author of five monographs. She also coedited The Imperial University: Academic Repression and Scholarly Dissent (Minneapolis: University of Minnesota Press, 2014).