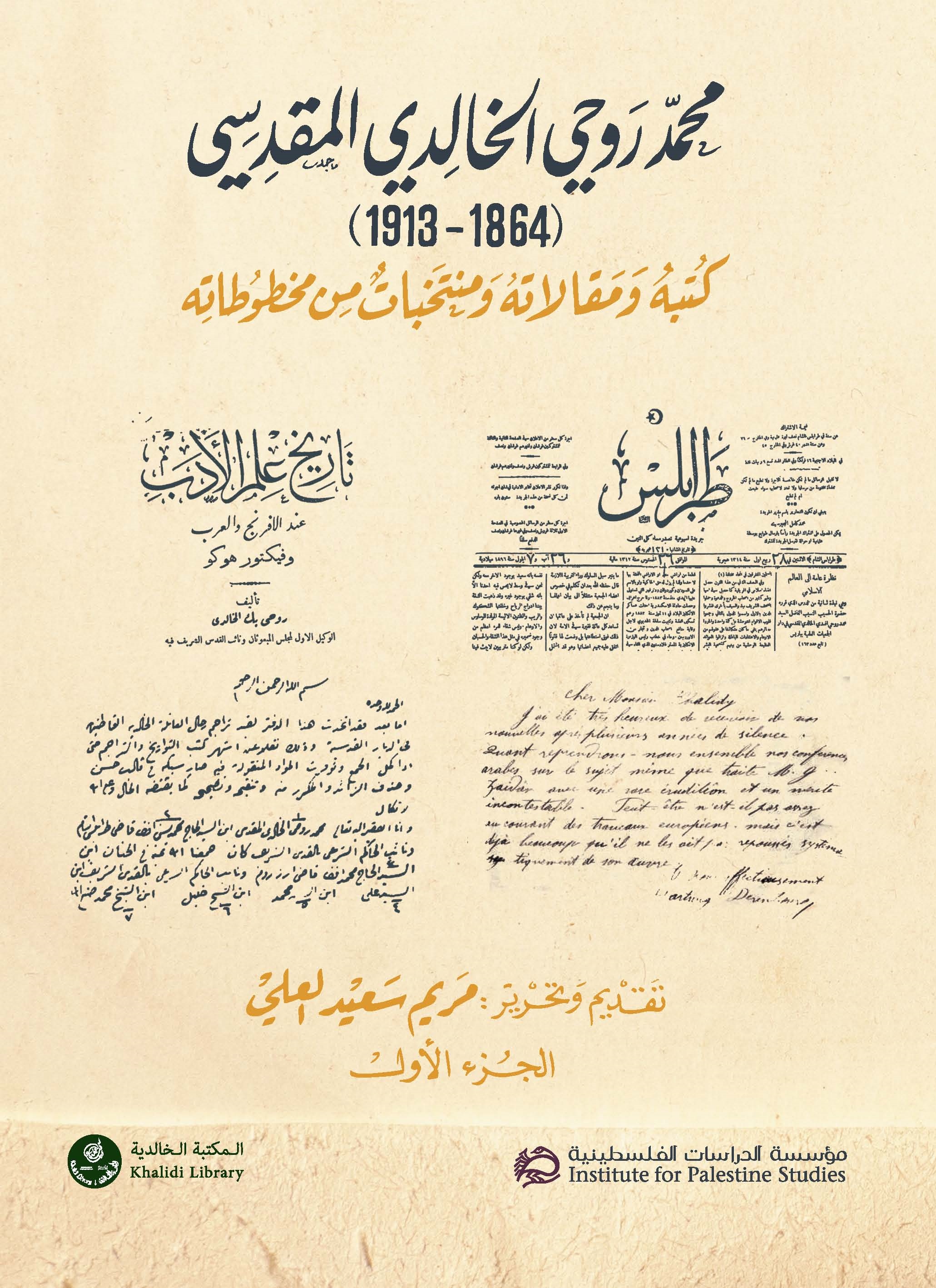 This book is a revised and edited edition of both the published and unpublished works of the Jerusalemite writer Muhammad Ruhi al-Khalidi (1864 - 1913). The first volume includes five of his books, reprinted here from the editions published in the early years of the twentieth century. The second volume contains all his articles that were published in the Egyptian journal al-Hilal, along with a series of articles titled “The Islamic World (3)” published in the Lebanese newspaper Tarablus al-Sham, which are reprinted here for the first time. In addition to his articles, this volume includes selections of valuable handwritten drafts of Khalidi’s writings, reproduced based on facsimiles preserved in the Khalidi Library in Jerusalem. These include texts with titles like “Paris”, “Ottoman Public Debt”, and “The Journey of the Jerusalemite to the Peninsula of al-Andalus,” along with a manuscript, “The Science of Linguistics [ʿIlm al-Alsinah],” preserved in Beirut. The book includes an introduction that documents Khalidi's biography along with his entire oeuvre, from his earliest to his latest writings, along with a preface that sums up his ideas and examines his authorial persona by setting it against the enlightenment-like context of the Nahda, or renaissance.

This book will be published as part of a series of scholarly studies on the history of Jerusalem and the Khalidi library. The series is a joint project between the Khalidi Library and the Institute for Palestine Studies on the occasion of the 120th anniversary of the founding of the library.

The publication of the book was made possible thanks to a grant by the Arab Fund for Economic and Social Development managed by Welfare Association – Taawon.

Muhammad Ruhi al-Khalidi was a Palestinian effendi, statesman and writer, and one of the prominent figures of the late-nineteenth century Arab Nahda (renaissance). He was born in 1864 into the notable Khalidi family of Jerusalem. He studied from a young age in modern schools in Lebanon and Palestine, and also attended courses at al-Aqsa Mosque in his birthplace Jerusalem before joining the Mekteb-e-Mulkiye, or civil administration school in Istanbul. After that, he continued his postgraduate studies at Sciences-Po and the Sorbonne in Paris. A loyal Ottoman subject, he held the position of Consul General of the Ottoman State in Bordeaux for eight years before being elected as a representative from Jerusalem in the Ottoman Chamber of Deputies (majlis al-mabʿuthan) after the proclamation of the Ottoman constitution in 1908 and 1912. He was a widely read intellectual, a man of the Nahda with an Islamic bent. He wrote on comparative literature, cultural history, and the pressing political issues of his day. He died in 1913 in Istanbul and was buried there.

Mariam Saeed el-Ali is a lecturer at the Institute of Oriental Literatures at the Université Saint-Joseph in Beirut. She earned her Ph.D in Arabic language and literature from the American University of Beirut in 2017, where her dissertation, supervised by Prof. Tarif Khalidi, was awarded the Abdul Hadi al-Debs Award for Academic Excellence. She is a recipient of the Andrew W. Mellon Foundation Postdoctoral Fellowship at AUB’s Center for the Arts and Humanities for 2020-2021. Her dissertation was published by the German Orient-Institut in Beirut as part of its series Beiruter Texter and Studien, no. 139 (December, 2020) with the title “The Akhbar [anecdotes] of Khadija Bint Khuwaylid in Islamic Sources: Structures of Narrative, Memory and History”.