Vernacular Education in Embroidery and Architecture 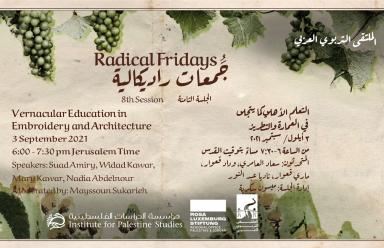 One of the most powerful forms of radical education seeks to shape not formal learning through taught lessons in the classroom, but informal learning through the built environment in which we construct and carry out our lives. This has long been a focus of “vernacular pedagogy,” that draws on local, indigenous and community-based knowledge to embed alternative ideas, ideals and values in everything from building architecture to urban spaces to design in traditional embroidery. Vernacular pedagogy, by literally building an alternative way of living into the human environment, works to reshape the lives, thoughts and values of those who inhabit and experience this environment, and can thereby call a utopian vision of a better, alternative future into being in the lived present. This webinar presents inspiring, innovative and forward-thinking radical vernacular Palestinian experiences of recent years in the spheres of textile, design and architecture, through projects which propose new ways of seeing, understanding, and constructing our visual, material, and spiritual environment.

Widad Kamel Kawar: born in Tulkarem city in Palestine in 1931, she received her BA from the American University in Beirut in 1955. Widad is considered an authority on Palestinian and Jordanian heritage, particularly costumes, textiles, handicrafts, and jewelry. Over the past sixty years she has collected more than 3000 pieces of costumes and jewelry from Palestine and Jordan primarily, but also from the region. Her collection is currently housed at Tiraz museum: Widad Kawar Home for Arab Dress. She has written and published extensively about embroidery as an art, craft, and way of life.

Mary Kawar: She holds a PhD from the London School of Economics; Kawar is a social and economic policy expert and former Jordanian Minister for Planning and International Cooperation. She has 30 years’ experience in government and international development across the globe. Her expertise is in the areas of labor, youth, gender, social protection, and refugee livelihoods. She spent 20 years with the International Labour Organisation and is currently the director of Tiraz: Widad Kawar Home for Arab Dress.

Nadia Abdelnour: Holds a BA in Sociology - Social Work from Beirut College for Women (now LAU). Her first practical social work experience was with UNICEF in Bourj Barajneh refugee camp. She worked in the NGO sector as a volunteer at the AUB Medical Center and Iqraa Association. For more than a decade she has been involved with Inaash Association that works with refugee women in the camps by tapping into the growing global market for traditional handmade goods while promoting Palestinian cultural heritage. She served as president of the association for two terms since 2014.

Mayssoun Sukarieh: is a Senior Lecturer at the Department of International Development at King’s College, London.