The third panel of the conference will be a roundtable discussion about ways forward to redress the balance of power and recenter the Palestinian cause. The roundtable includes Palestinian journalists, analysts, lawyers, and activists.

Live interpretation into English is provided.

Hashem Abushama: is a doctoral candidate at the University of Oxford’s School of Geography and the Environment. His research examines the politics of Palestinian cultural production and urbanity under settler colonialism. It attempts at bringing the realities in Palestine in conversation with seminal works from the fields of Black Studies and Indigenous Studies. He is the recipient of the Jerusalem Quarterly’s Ibrahim Dakkak Award for his essay “Politics of Portraiture: The Studio of the Krikorians,” which documents the story of one of the earliest local photography studios in Jerusalem. He holds an MSc in Refugee and Forced Migration Studies from the University of Oxford, and a Bachelor of Arts (BA) from Earlham College, Indiana. He grew up in Arroub Refugee Camp in northern Hebron.

Dana Farraj: is a legal researcher and has been a certified lawyer at the Palestinian Bar Association since 2019. She obtained her master’s degree in International Humanitarian Law from Aix-Marseille University and her bachelor’s degree in law from Birzeit University. Her research interests include refugee law, human rights law and international criminal law.

Razi Nabulse: is a Palestinian researcher and writer.

Ruwaida Safadi: is a Palestinian refugee living in Lebanon, from the village of Al-Kabri near Acre. She received a Bachelor's degree in media from the Beirut Arab University in 2009. She is a journalist and has worked as a programmer for MBC, a field reporter for the Lebanese Future TV channel for more than eight years, and for France24 in Arabic. She is an activist in the field of women's rights, and produces documentaries, the latest is about the Beirut Port explosion. She is a member of the Palestinian Journalists Association in Lebanon (Tafaol).

Laura Albast: is a Palestinian journalist, translator, and digital content editor. She currently works at the Institute for Palestine Studies in Washington, DC. Her research and translations have focused on public diplomacy, community health work, and media governance in the Middle East. Her work has appeared in The New Arab, Bloomberg Businessweek, and Arab American News. She is also an active organizer with the Palestinian Youth Movement in North America, especially during the events of the Jerusalem uprising.

Amany Khalifa: is a social worker. She holds a master's degree in the management of NGOs and is currently completing her second master’s degree in cultural studies which discusses the political economy of Palestinian cultural production. She has been working for 10 years in Grassroots Al-Quds, and has held various positions in the organization. She is currently working as a coordinator of the local movement and provides support for local initiatives. 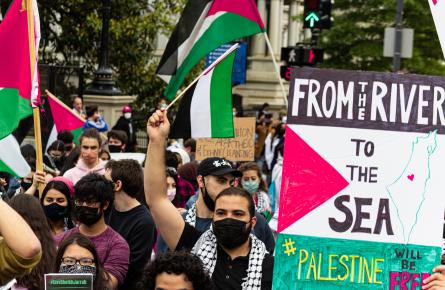