Between Two Eras: Beirut Before and After the Explosion

To hear breaking news about an explosion that has just occurred in Beirut, or to read and watch such news, is fairly common in a city exhausted by explosions, inside-out. In such events, prepare yourself to hear more details on the evening news, or in the hours following the event, speculation begins to run through your mind; The bombing may have targeted a public, political or media figure, it may be a terrorist attack, or it may be an Israeli stirke. 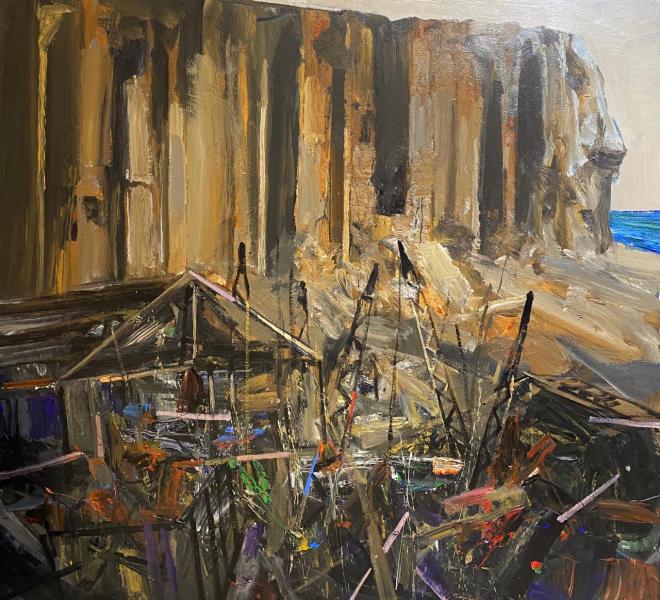 On the evening of August 4, 2020, the matter could not be postponed, especially since I was not in Beirut that day due to travel restrictions imposed by the coronavirus pandemic. There was intense and contradictory news about the explosion, especially during the first moments of its occurrence. Correspondents of the Lebanese, Arab and international television stations stationed themselves in the areas surrounding the explosion site and began broadcasting breaking news and speaking with passers-by as eyewitnesses to the event. Some of them spoke assertively about hearing the roar of an Israeli fighter plane or seeing it in Lebanese airspace, and some of them asserted that they saw and heard the sound of an Israeli missile. The media also began broadcasting pictures of wounded men, women, and children bleeding in the streets and on the sidewalks. In the background, we could hear the sound of fire trucks and ambulances. Expressions of confusion, fear, surprise, and anxiety on the faces of the journalists were evident.

I tried to hang in there and contact a group of friends and colleagues to check on them. With great difficulty, I was able to talk to some of them despite the immense technical pressures on communication and internet networks. A friend was slightly injured by flying glass on his balcony, another friend and his wife were also both injured by flying glass, a third friend was unable to continue his conversation with me as he did not yet comprehend the extent of the damage inflicted on him, and a fourth friend had a part of his house destroyed. As for colleagues at the Institute for Palestine Studies, for most of them, the damage was minor, as was the case with the Institute’s building and its assets.

I also called the custodian of the building where I lived in Beirut to check on him. He informed me that my apartment was damaged despite it being far from the port. About two to three hours had passed since the explosion, I became certain that what had happened was not ordinary.

I was stunned, afraid, and confused by the horror of what I was watching on the TV screens. I started thinking about those who were in the vicinity of the explosion site, from the firefighting and ambulance crews to the ordinary people of this city who saw Beirut explode in front of them. Some of them lost their families, loved ones, and friends, not to mention the destruction of buildings and neighborhoods; residential and heritage sites, as in Mar Mikhael and Gemmayzeh, hospitals, some cinemas, theaters, and museums.

This explosion, according to the description of the press and experts, was one of the largest non-nuclear explosions in the worl. Lebanon in general, and Beirut in particular, are still suffering as a result of the social, economic and cultural repercussions that are exacerbating day by day, especially since the blast coincided with an economic collapse post a popular uprising that had erupted on October 17, 2019. Addition the state of public health continues to deteriorate in light of the outbreak of the Covid-19 pandemic, which accelerated the collapse and exacerbated the crises that the Lebanese people were suffering from.

I visited Beirut once, three months after the explosion, and five times in a row within a year, and in each visit, I found the situation worse than the previous visit. The more I thought that the situation had reached a conclusion, the more I discovered that with each visit, this was a bottomless collapse.

A whole year has passed since the port explosion, and since then, there was no limit to the slope, or as it is said, it is bottomless. Every day, the Lebanese citizen wakes up to a tragic situation worse than the previous day, whether it was the fluctuating exchange rate of the U.S. dollar, the lack of medicines, fuel and other necessary commodities in the market, or the almost permanent power outage. Beirut has turned from a city radiant with life into a dark and dirty one, mainly due to the lack of waste removal for days from its streets, even the waterfront is suffering from this darkness and its pioneers are no longer able to practice jogging there. The health sector is no longer able to deal with simple health cases… what about complex cases? Especially since facing the pandemic has exhausted the health sector throughout this year.

This is no longer Beirut that we know, and it does not even resemble the Beirut we knew. Beirut book fairs and publishing houses, Beirut the film industry, theatre, the press, art exhibitions, lectures and conferences, Beirut cafés and bars, and the intellectual debate between different opinions and trends, Beirut, the meeting place of diverse intellectual currents, Beirut, which receives all its visitors warmly.

Beirut is almost the last city and the last resort in our Arab world that tolerates and accepts the opinion of others with open arms. It is the last city that opens its arms to embrace an Arab and international cultural scene that preserves our presence on the map of Arab and global culture.

Despite the darkening of the image, what happened and is happening in Beirut is not destiny, and Beirut's return to its glow, vitality, and image as we know it is only a matter of time coupled with a lot of loyalty from Beirut's friends and lovers, individuals, and institutions.

The question here is why this optimism? Is this possible? The answer is yes. Despite what has befallen Beirut since the port explosion, it has continued its cultural and artistic giving, and its exhibitions, theaters, and cinemas have regained their activities and artistic and cultural role, albeit incompletely, despite the damage and lack of capabilities. Newspapers have also continued publishing. Beirut’s research institutions and publishing houses maintained production.

Loyalty to Beirut translates into boards of trustees and boards of directors taking decisions to stand firm and continue to perform their tasks and duties and maintain their positions in Lebanon, specifically in Beirut, and not transfer their work and activities to other capitals. Beirut regains its glow with loyalty, steadfastness, and continuity.

It is the time to give a little back to Beirut, which has given us so much.

This article was translated into English by Reine Bou Jaoude.

From the same blog series: Commemorating the Beirut Port Explosion

Mutasim Khalaf
The Death of Beirut Stains Our Names

Ahmad Laila
My Camera and Moments of Helplessness on August 4

Ayham al-Sahli
If Beirut Falls We Lend It Our Hands

Taha Younis
Beirut Is Not What It Used to Be