The Jerusalem Uprising: Implications and Consequences 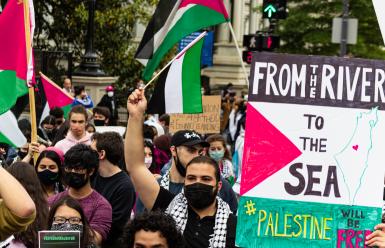 The recent uprising in Jerusalem and Shaykh Jarrah was distinguished from previous such events by the wide scope of popular participation and the blow that was dealt to the Israeli military doctrine of preemption.  Above all, the uprising restored a sense of dignity and self-confidence to the Palestinian people and strengthened their faith in their ability to unite around the struggle for political rights, despite the differing circumstances of Palestinian communities in various geographic locations.  The uprising also situated the Palestinian political liberation movement at the forefront of public discourse in the Arab world and generated widespread international solidarity.

This conference seeks to analyze the implications and consequences of the Jerusalem uprising and to diagnose the options available to build on its results, both regionally and internationally. This conference will also shed light on what is happening on the ground in Jerusalem, including the ongoing Israeli policies of “Judaization” of the neighborhoods and holy places of Jerusalem.  It will discuss means for confronting these policies and for enhancing the capabilities of youth initiatives resisting the occupation of Palestinian land.  The conference also aims to analyze the role of the Palestinians in the areas occupied in 1948 in defending Jerusalem and confronting Israeli racism, which was clearly in evidence during the recent uprising.

The Jerusalem Uprising: Implications and Consequences