A Battle of Will

I found myself in the custody of the Occupation forces at dawn on January 10, 2003. A half hour after I was detained, I was met by a Shin Bet interrogator at the Maskoubiya interrogation center. He was later joined by three others, one of whom was the head of interrogation at Shin Bet, who told me, “Welcome, chief. This time you won’t escape [our questions] like the other times without a confession. Confessions are ready for you, but we want the package and to know who is your direct supervisor?” 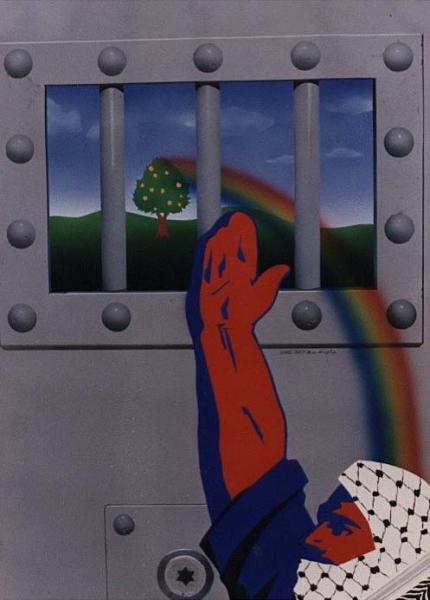 The military-style interrogation began right away, they did not waste time chitchatting. At the beginning, an older interrogator began explaining to me the dangers of steadfastness: “This time, you won’t leave this interrogation in peace, we have an order from the attorney general to interrogate you like a time bomb; if you are paralyzed or die, no one will hold us accountable. You better end the story here before the Shin Bet ends your life.” Finding no listening ear, he left the room so three t interrogators could continue torturing me.

First, they made me stand, knees bent, against a wall. I did not respond to their method, so they sought methods that did not require my cooperation, namely psychological torture. They sat me on a chair tied to the ground, they put my feet behind the chair’s back legs. One of them sat in front of me and pushed me back 45 degrees while the other stood behind me to prevent me from falling to the ground. The third stood in the middle to make sure that my body was reacting as evidence that the position they wanted me in was correct. After a few minutes, my body began to revolt, sweat trickling down. I stayed in this state for half an hour, followed by a period of rest filled with threats and a promise to repeat the process over and over. Two days passed in this state: I could not move any part of my body without severe pain. They lost hope in the method, so they sought a different one.

They put zip ties around my arms; two interrogators pulled the zip ties tight, while the third interrogator would move my hands. I felt poison in my veins and a fire sensation at the tips of my fingers. When this method amounted to nothing after multiple tries, they handcuffed me and repeated the method. I felt like my hands were chopped off.

With the end of every round of torture, they would ask me questions that I have memorized by heart: “Will the story end? Or do you require more torture to realize that we won’t leave you unless you’re dead or you confess?”

A week of uninterrupted torture passed night and day with new methods. I was not allowed to sleep except for two hours every three days. I left the interrogation with new deformities: a chronic and sharp inflammation of my arms, neck, and stomach. I still cannot sit or sleep without a long-sleeve shirt and a collar - even during the summer.

This article is part of a series for the International Day in Support of Victims of Torture on June 26. Inspired by Iraqi artist Serwan Baran’s bronze sculpture depicting prisoners of opinion, Palestinian prisoners wrote about their experiences with the Israeli occupation prisons.

Hassan Fatafta is a freed prisoner.

From the same blog series: Bronze Sculpture by Serwan Baran: International Day in Support of Victims of Torture

Jamal Haweel
Interrogation in Israeli Prisons: The Cacophony of Loud Music and Sounds Of Torture

Issa Qaraqe
The “Torah” of Torture

Ameer Makhoul
Opening the Cellars and the Memory of Pain

Dahesh Akari
A Scene from the Memory of Pain and Will