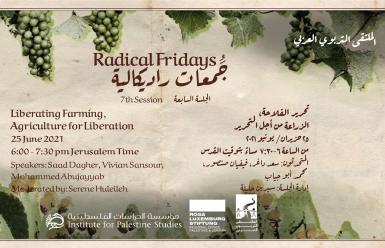 This section of our Radical Education webinars looks at teaching and practicing farming/seed preservation initiatives in Palestine that have taken a radical approach to farming/agriculture and its organic connection to learning/liberation. It will shed light on the historical/structural causes of the decline of Palestinian farming, whether by the occupation or the rise of agribusiness, and what that meant in terms of the loss of organic practices of farming, loss of indigenous seeds and alienation from the land. This is not only a structural issue, but is connected to changes in learning and education about food culture and production. The loss of these practices made Palestinians more dependent on Israeli agriculture and subsequently threatened their food security and their independence: three quarters of all Palestinian food consumption is now linked to Israel, and Israel also directs Palestinian farmers to produce certain crops - like the strawberry in Gaza - that require much water and Israel can export it at very high prices. We hope that this webinar will inspire more Palestinians to think through farming practices as a precursor for food security that can be considered a step towards liberation and a central concern for radical, social justice education in support of the Palestinian liberation movement.

Saad Dagher: A Palestinian farmer, Dagher studied agricultural sciences in Russia and in 1996 he started his first experiment in agro-ecology in Palestine. Saad believes that agro-Ecology, natural farming, and nature restoration are means for political and social liberation. He established the Humanistic Natural Farm in Palestine and is co-founder of the Palestinian Agro-ecological Forum, a volunteer Palestinian group working to spread ecological farming in Palestine.

Vivien Sansour: An artist, storyteller, researcher, and conservationist, Sansour uses images, sketches, film, soil, seeds, and plants to revive old stories in contemporary presentations, and to advocate for seed conservation and the protection of agrobiodiversity as a cultural/political act. Vivien founded the Palestine Heirloom Seed Library, and has been showcased at exhibitions around the world. Born in Jerusalem, Vivien lives in both Bethlehem, Palestine and Los Angeles, USA.

Mohammed Abujayyab: is a Palestinian American activist who grew up in Al-Maghazi Refugee Camp in the Gaza Strip to a peasant family that was displaced by Zionist forces in 1948. He is a farmer that advocates for economic, social, and ecological sustainability rooted in farming communities. He is co-founder of Om Sleiman Farm in Ramallah, and has worked with farmers and activists in Palestine, the US, Brazil, and Jordan.

Serene Huleileh: Cultural activist, researcher, translator, and a founding member of the Arab Education Forum since 2000.