The First Intifada (2): Radicalizing the University 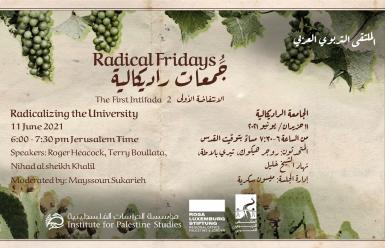 What happened to universities during the first Intifada? As part of its war on education, Israel closed all universities from the beginning of the Intifada in 1987. These closures were imposed sporadically and for long periods extending from one week to four months even before the Intifada started. University education also acquired a new meaning, no longer seen primarily as a vehicle for individual social mobility, but an essential tool for collective emancipation. University staff taught their subjects in public spaces, and grounded them in the political struggle of Palestinians for justice and liberation. Students were at the forefront of the popular movement, participating in learning with all other groups of society. These experiments are not well documented and consequently have been left understudied. The webinar will shed light on some of these experiments in the hope that others will write/share their experiences and memories from that period.

Roger Heacock: professor of history at Birzeit University’s PhD program in social sciences. After thirty-five years in Palestine, he was expelled by the occupation through visa denial. He is currently guest professor at the University of Vienna (Institute of Contemporary History) and the Collège de France. His publications include “Intifada: Palestine at the Crossroads (1990: with Jamal Nassar); and “Intifada 1987: the transformation of a people (2021: with Alaa Jaradat).

Terry Boullata: from Jerusalem, Boullata graduated from Birzeit University and co-founded the New Generation Kindergarten and elementary school in Abu Dis town- East Jerusalem in 1999. She produced two documentary films: "The Iron wall" that tells the story of Israeli settlements and their impact on the Peace process, and “Jerusalem: The East side story”, about the marginalization of East Jerusalem under Israeli occupation. She is also active in several cultural and youth organizations.

Nihad al-Sheikh Khalil: PhD in Modern and Contemporary History. He was born in Gaza and lectures at the history department of the Islamic University in the Gaza Strip. He was head of the department of History and Archeology at the Islamic University from 2011 to 2013 and head of its Oral History Center from 2015-2017. He published many research papers about contemporary Palestinian and Israeli history, and supervised several MA theses on the same topic.

Mayssoun Sukarieh: is a Senior Lecturer at the Department of International Development at King’s College, London. 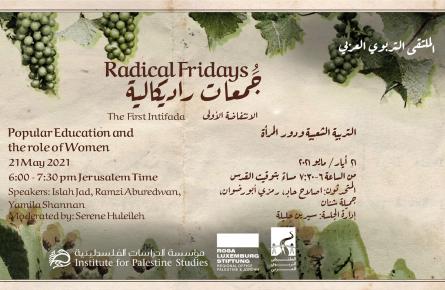 21 May
2021
Webinar
The First Intifada (1): Popular Education and the Role of Women
Online
-
Arabic