The First Intifada (1): Popular Education and the Role of Women 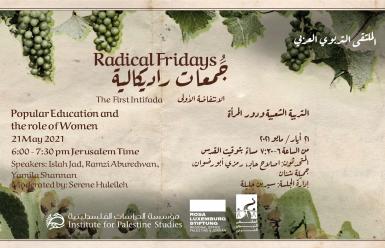 If one is to think of radical education in Palestine, perhaps the epitome of this practice would be the popular neighborhood committees. During the first Intifada, from 1987-1992, the Israeli military occupation forces imposed indefinite closures on schools and universities. An underground network of popular education grew and organized neighborhood “classes” in different spaces in the West Bank and Gaza. New forms of learning and teaching grew in cities and villages across Palestine, as the whole society became a field of experimentation in nonformal and informal community education. The first Intifada was thus not just a popular social movement against the occupation, but a radical educational mobilization as well. The webinar will shed light on some of these experiments and will focus not only on forms of radical education, but also on radical organizing by women and other groups during the first Intifada.

Islah Jad: is a lecturer on gender issues and politics at the Women's Studies Institute and Cultural Studies Department of Birzeit University in the West Bank. She has authored several books and papers on the role of women in politics, Islam, and NGOs. Dr. Jad received her Ph.D. from the School of Oriental and African Studies in London in 2004.

Yamila Hussein Shannan: (Ed.D, Harvard University) A Palestinian born in Colombia and raised in Jerusalem, Yamila is a scholar, educator, activist and public speaker dedicated to socio-economic and political justice. Her work examines how matrices of oppression and liberation operate in the context of settler colonialism and anti-Black racism.

Ramzi Abu Radwan: (born 1979) is a Palestinian musician and founder of al Kamandjâti music Centre. He studied music at the ESNCM in Palestine and then at the Regional Conservatory of Angers (France). He is the subject of many documentaries and a book entitled “Children of Stone: The Power of Music in a Hard Land” by Sandy Tolan (2015).

Serene Huleileh: Cultural activist, researcher, translator, and a founding member of the Arab Education Forum since 2000. 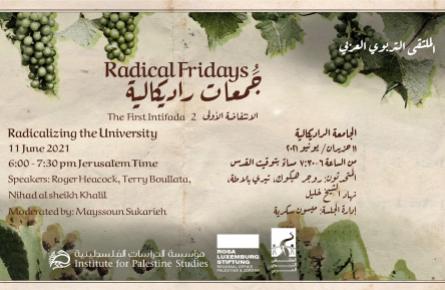