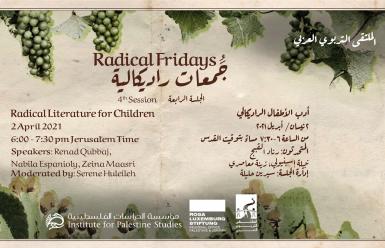 The session will shed light on Palestinian literature for children published over the last half a century that fosters children imagination, teaches them to question, and treats them as agents of change.

Radical children’s literature raises questions about those in power, and often calls into  question accepted understandings of childhood in terms of how much a child can know, and how much power a child gets to have. Indeed, children’s literature has long offered a realm for expressing utopian visions and launching subtle critiques of the existing social order. This is particularly so in the context of anti-colonial struggle, where the history of the colonized is not taught at school, and when taught, it is often teleological, dry and boring. Palestine has offered the Arab library some of the most radical publications for children and during this webinar we will be hosting three long standing and influential independent publishers: Dar al Fata al Arabi, Tamer Institute for Community Education, and Al Tufula Center. Palestinian novelists, such as Ghassan Kanafani, were also pioneers in recognizing the importance of writing radical books for children.  Radical children’s literature moves beyond traditional assumptions about what is appropriate for children, acknowledges pressing concerns of the day as being directly relevant to children’s lives, refuses to whitewash difficult truths, and recognizes the cognitive and emotional capacities of children.

Nabila Espanioly is a feminist and peace activist who founded the Pedagogical Center and Multipurpose Women’s Centre in Nazareth (Al-Tufula) in 1989 and has served as its director since then. She has an M.A. in Psychology from Bamberg University, Germany and a B.A. in Social Work from Haifa University.  Nabila has written and edited several books and articles on early childhood care and development, as well as general social and political issues related to women.

Zeina Maasri (PhD) is a Senior Lecturer at the University of Brighton, UK and a former faculty member at the American University of Beirut (1999 – 2016) in Lebanon. She is the author of Off the Wall: Political Posters of the Lebanese Civil War (IB Tauris 2009). Her new book, Cosmopolitan Radicalism: The Visual Politics of Beirut’s Global Sixties (Cambridge University Press 2020), explores the transnational circuits that animated radical Arab modernist pursuits in Beirut from the late 1950s to the mid-1970s.

Renad Qubbaj is the General Director of Tamer institute for Community Education since 2006. In addition to overseeing the National Reading Campaign and the Publishing Unit that Tamer Institute has been organizing since 1992, Ms. Qubbaj also served as a member of different book juries both in Palestine and the Arab world. She has also been an invited speaker in many conferences to introduce Tamer Institute’s unique approach to learning and reading promotion.

Moderator: Serene Huleileh is a Cultural activist, researcher, translator, and a founding member of the Arab Education Forum since 2000.