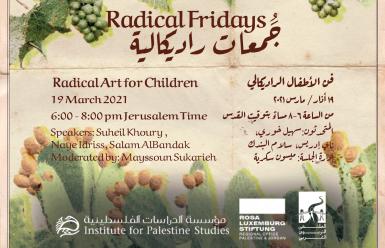 Discussions of radical education often focus on education for adults. But children and young people are also centrally involved in collective struggles for radical change, contributing to and engaging in a range of political activities- The children of the Intifada are but just an example from Palestine. Such involvement tends to be rendered invisible by dominant social constructions of children as being helpless and in need of protection. In this webinar, we focus on the theory and practice of radical education for and with children. As we do this, we will seek to problematize conceptions of radical change that eclipse the role of children, as well as conceptions of children that ignore their potential and actual role in radical change; instead, we will ask how alternative educational spaces for children can lead to radical involvements with social change that can begin in childhood and be carried out throughout the rest of the life course.

The event is supported by by the Rosa Luxembourg Stiftung.

Naye Idriss was born and raised in Beirut. She graduated in May 2020 from the college at Columbia University in the city of New York, where she majored in Comparative Literature and Anthropology. Naye is currently studying Arabic language and literature in a year- long program in Beirut. She has spent time both as a student and a researcher in several alternative pedagogical centers across Lebanon including the Ghassan Kanafani summer program which she attended as a kid.

Salam AlBandak is an environmental activist working in the field of Art. Founder of the initiative “Fann wa Salam” which focuses on creating an alternative learning space for children, where we learn by doing, and by delving in an artistic experience that entices our senses. The initiative replaces the language of comparison and competition with the language of sharing, working together, and celebrating the beauty of diversity. Together, we build environmentally friendly practices, connected to nature, starting with us, spreading, and thriving.

Mayssoun Sukarieh is a Senior Lecturer at the Department of International Development at King’s College, London. She received her Ph.D. from the University of California, Berkeley. She has lectured in anthropology and development studies in universities around the Arab region (American University of Beirut; American University of Cairo) and the US (Columbia and Brown Universities). Mayssoun recently published her first book: 'Youth rising: The politics of youth in the global economy'.