Out of the Shadows: Writing Palestinian Women

A Jerusalem Quarterly (JQ) review of historian Ellen Fleischmann's thoughtful and important book on the Palestinian women's movement during the British Mandate over Palestine, posted here in JQ's  special file for International Women's Day 2021, notes that Fleischmann contrasts the extensive coverage of Palestinian women, their movement and their issues in the Palestinian press of the day (including many contributions by women writers), with their almost total absence in histories of the Mandate. It is that absence that this file of eight articles from Jerusalem Quarterly in honor of March 8 hopes to partially address. The authors of these pieces, published in JQ over the last two decades, have delved into private diaries and memoirs as well as public sources in order to bring the lives and works of notable Palestinian women of the past out of the shadows of the present.

The work of Jerusalem artist Sophie Halaby, born in 1905, is illuminated in an incisive essay written by a major contemporary Palestinian artist, Samia Halaby. Laura Tibi examines the work of another signal Palestinian woman artist, Zulfa al Saadi, including her contributions to the First Arab Art Fair in Jerusalem in 1933, and finds that her work once deemed “traditional” by male art critics should be reconsidered as an early embodiment of modern art. Not only was she the first woman professional photographer, Karimeh Abboud was also “among the first in the region to set aside European style traditions in portrait art and photography,” writes Issam Nassar. And Salim Tamari broadens our understanding of women's activism through his reading of the journal of Adele Azar, the “mother of the poor,” in Jaffa during World War I. In a 2018 conversation with Um Hani at the age of 92 we encounter a woman who built one of Arab Jerusalem's most successful tourist businesses after the catastrophe of the nakba. Still going over the business accounts in her office, she advises her interlocutors, grand-daughter Diala Shamas and Penny Johnson, that “your mind goes if you sit at home.”

The city of Jerusalem plays an important part in many of these lives as well. In an excerpt from Serene Husseini Shadid's memoir, Jerusalem Memories, published in one of the earliest editions of JQ, we enter her childhood during the Mandate, from her near magical days at her school in the Old City next to Al Aqsa and at picnics in the countryside listening to a hakawati, a traditional story teller,  to her rude awakening to the “harsh realities” of Palestine when her father is arrest by the British in 1935. And finally, in “Young Women in the City: Mandate Memoirs”, Ellen Fleischmann provides us with a novel view of Jerusalem in the Mandate years showing that this ancient city provided a liberal atmosphere for young women – perhaps in a sad contrast with the constricted and surveilled city of today.

This is the second of a series of files from Jerusalem Quarterly – its editors and staff wish everyone good reading on Women's Day and beyond. 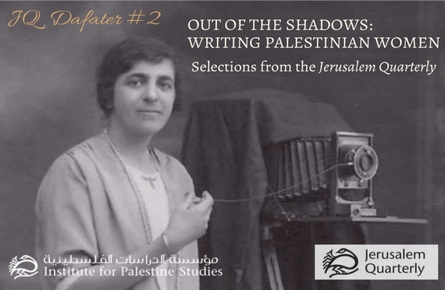