Polarization, Populism, and Brinkmanship: The Rise and Fall of Israel's National Emergency Government 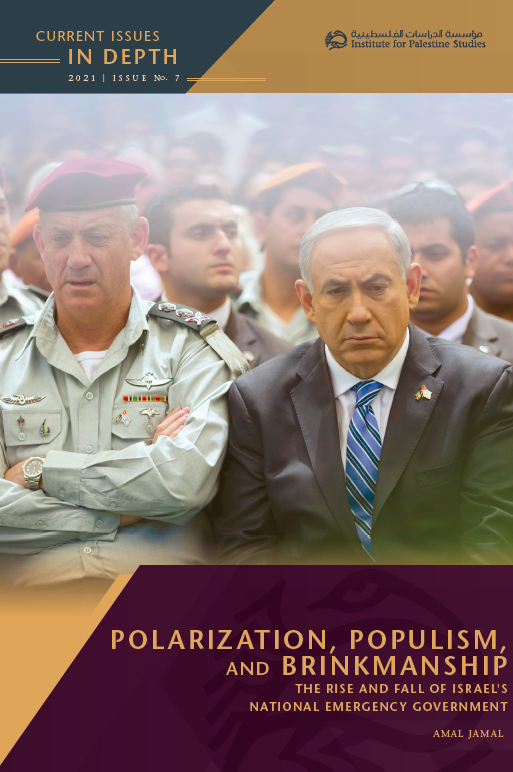 Netanyahu's centrality to the Israeli political landscape is a testament to his political cunning and agility, as well as to his ability to ride and shape the populist-nationalist current that has come to dominate that landscape. Amal Jamal argues here that the nationalist theses propounded for so long by Netanyahu have become mainstream, part of a process whereby a “peace camp”—a politically weighty current that advocates as a vital priority a compromise settlement with the Palestinians—no longer exists a in Israel.

In addition to examining how these largely internal factors affect the Israeli political system and shape its current crisis, this essay examines the ways that Netanyahu has manipulated the issue of the annexation of more Palestinian territory to both maintain his supremacy within the system and normalize the idea politically. Similarly, it shows how Netanyahu was able shape the Trump administration’s [so-called] peace plan, and to benefit from its engineering of the normalization of relations between Israel and several Arab governments.

This monograph also illustrates the almost seamless strategic consensus between all major Israeli political leaders and factions regarding the maintenance of Israel’s overall control of the entire territory from the Mediterranean Sea to the Jordan River, the strengthening of Israel regionally via normalizing relations with Arab states, and the simultaneous sidelining of the Palestine issue. Finally, Jamal offers an insight into the existence of what he calls a “red line,” a wall-to-wall consensus among Zionist parties to exclude Arab political parties from access to governing power within the Israeli political system. At the same time, he suggests ways in which that situation may change in the future.

By delving into the roots of the recent near-paralysis of the Israeli electoral system, which has paradoxically been combined with the unchallenged domination of Israeli politics by Benjamin Netanyahu, this essay offers indispensable background for understanding not only Israel’s political evolution over the past few years, but also possible developments after the Knesset election scheduled to take place in March 2021.

Amal Jamal is professor of political science at the School of Political Science, Government and International Affairs and the head of the Walter Lebach Institute for the Study of Jewish-Arab Coexistence at Tel Aviv University. He has published extensively on Israeli politics, the Palestinian national movement, and the Israeli-Palestinian conflict. His last book, Reconstructing the Civic: Palestinian Civil Activism in Israel, was published by SUNY Press in August 2020.