Community violence and Israeli police negligence have long plagued Palestinian towns within the Green Line. More than 1,466 Palestinian citizens of Israel have been killed since the year 2000.

The killing of nursing student Ahmad Hijazi by police on February 1 sparked a new wave of dissent. Thousands of Palestinian citizens of Israel marched the following day, protesting against rising crime and police inaction.

Hijazi and his friend, Dr. Muhammad Aramush, were studying at Aramush’s house in Tamra when clashes between police and criminal assailants erupted. They stepped outside to see what was going on, and were shot by Israeli police officers. Hijazi was killed, while Aramush was wounded.

Meriam AboElhija, 25, is a newspaper editor and resident of Tamra. She argues that incidents of police negligence are far more prevalent in Arab communities in Israel.

“It’s impossible for [the police] to fire shots randomly [and] casually in a Jewish city,” AboElhija told Palestine Square during a Zoom interview. “But they find it easy in [our] community, they thirst for Arab blood.”

A police statement released after the incident indicated that fire had been exchanged with “four suspects.” In fact, two were bystanders: Hijazi and Aramush. Arab news outlets in the Palestinian Interior refuted the false claim with eyewitness accounts.

AboElhija said that police tried to impose a media blackout following the killings. In response, Palestinian journalists in the Interior protested the deceptive narrative of the Israeli police by ‘exiting’ media groups shared with police officials, including WhatsApp. These forums were previously used to share police-blotters and receive information on criminal activities, accidents, or other incidents taking place in cities and towns.

“This is not only an issue of inaction... the police [are] accomplices to crimes committed by gangs,” AboElhija said. “It is easy to kill [us] because there is no real accountability.” 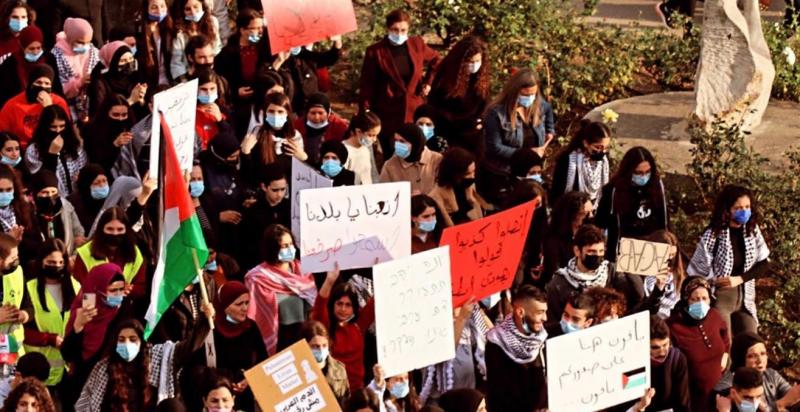 AboElhija led a group of young demonstrators on February 6, when residents took to the streets again demanding that the police be held accountable.

“I wanted to raise my voice to show that we are here, that we are alive and that we want to live,” AboElhija said.

AboElhija marched with more than 100 women towards Ahmad Hijazi’s home last month to give condolences to his family and to affirm that women have an active role in resisting police and criminal activity.

“Is a woman an intruder? Is she intrud[ing] on the resistance [against] the Occupation? She has an opinion on economic issues, racial discrimination, and criminal activity. Women are not isolated from this.” 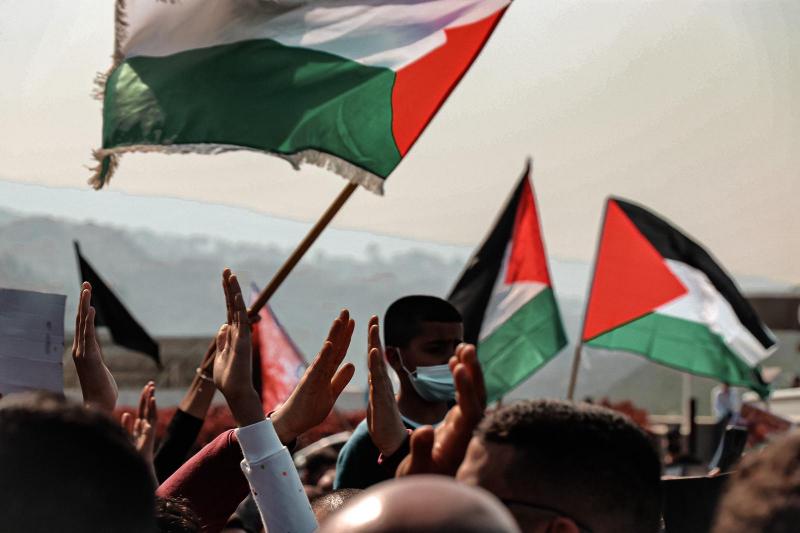 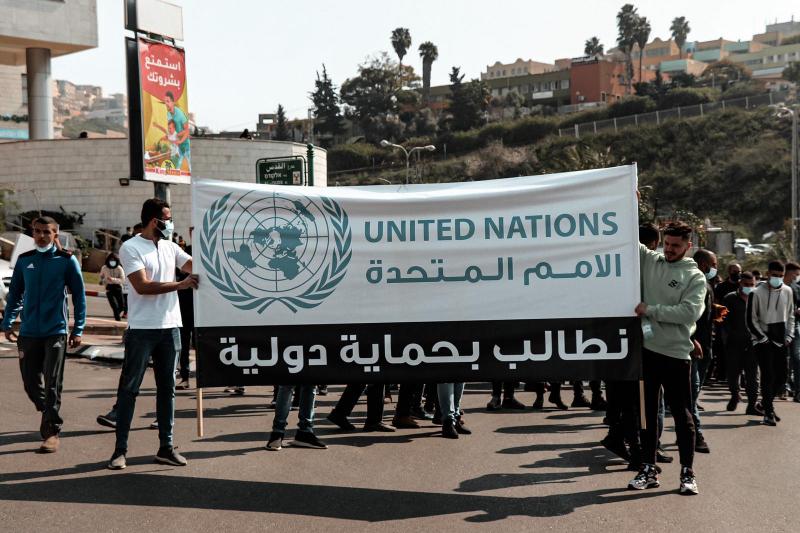 Tawfik Abdelrzak, 21, a native of Umm al Fahm and a first-year law student, participated in one of the first protests against police negligence and rising crime, which took place in Kafr Qara on January 6 after the killing of the former mayor’s son.

“We have been suffering from crime for 10 years, there has been no resolution,” Abdelrzak told Palestine Square in a WhatsApp call. “[During the protest], the police blocked the street, used water cannons and tear gas against us... we choked and fell to the ground.”

According to Abdelrzak, Musta’ribin from the police force (otherwise known as Israeli undercover units dressed as Palestinians) blended in with the crowd.

“I caught them on film arresting people - they saw me and confiscated my camera,” Abdelrzak said. “They deleted the footage and told me that I wasn’t allowed to film them because they were Musta’ribin.”

The killing of Ahmad Hijazi and the brutal handling of protestors sparked a wave of demonstrations across Palestinian towns in Israel, one especially sustained in Umm al-Fahm.

“Umm al-Fahm, the ‘nom de guerre of Palestine’ as [caricaturist] Naji al-Ali described it, picked up the call and took to the streets.”

Abdelrzak said that the Palestinian community in Israel suffers from a crisis of identity, holding Israeli citizenship while still being Palestinian in roots, principles, and causes.

“Will the Israeli Occupation police begin treating us like ordinary citizens? I don’t think so, especially given the nation-state law that categorizes non-Jewish persons as second-class citizens,” Abdelrzak added. “We are below their standard. They are racist, they bring up generations to be racist.”

The Proliferation of Violence

Tareq Omari, 26, is a resident of Sandala village on the border of Jenin. An avid photographer, he has participated in and documented all protests in Umm al-Fahm since they started eight weeks ago.

“The Palestinian Arab community [in the interior] has a phenomenon of violence. There are many reasons behind it… family feuds, the black market... criminal gangs are spreading greatly and the police turn a blind eye.” Omari told Palestine Square in during a WhatsApp call.

The recurrence of shootouts and other crimes committed by assailants is exacerbated by the growth of the unlicensed weapon trade. Weapons are either smuggled in, stolen from Israeli military warehouses, or bought directly from Israeli soldiers.

In 2013, Israeli police reported an estimated 400,000 unlicensed guns in the country. In 2019, they confiscated upwards of 4,000 weapons, most of which were carried in Palestinian towns.

Carrying a licensed gun in Israel is considered a “privilege” due to strict ownership laws. Public Radio International (PRI) reported in 2017 that citizens must meet specific criteria, including providing a “security” reason, like working as a police officer or living in a “national priority area.”

Ben Hartman, the reporter interviewed by PRI, stated that these areas are “often West Bank settlements, or places on the border with Gaza or Lebanon that [are considered] high danger areas.”

These restrictions endanger Palestinians living in the West Bank and Gaza, putting them at the mercy of illegal settler militias. The restictions also largely exclude Palestinian citizens of Israel and contribute to the spread of unlicensed gun ownership, which often leads to deaths in Palestinian communities.

The Eighth Friday of Anger in Umm al-Fahm 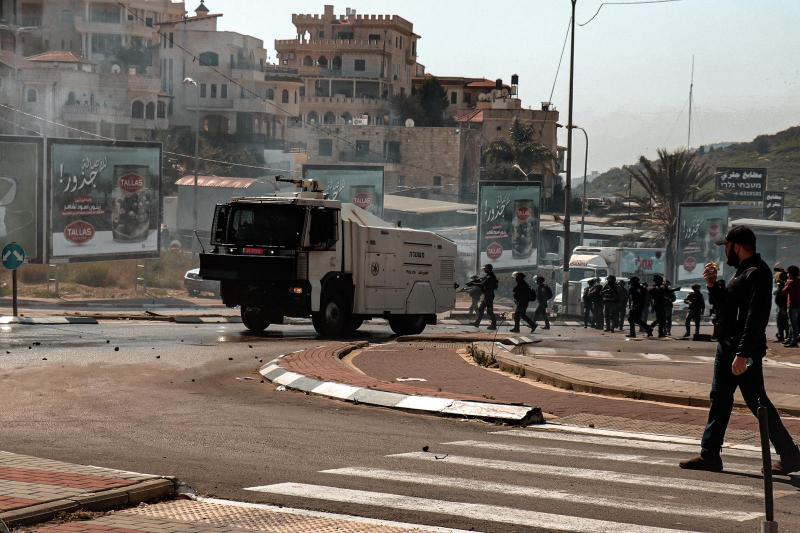 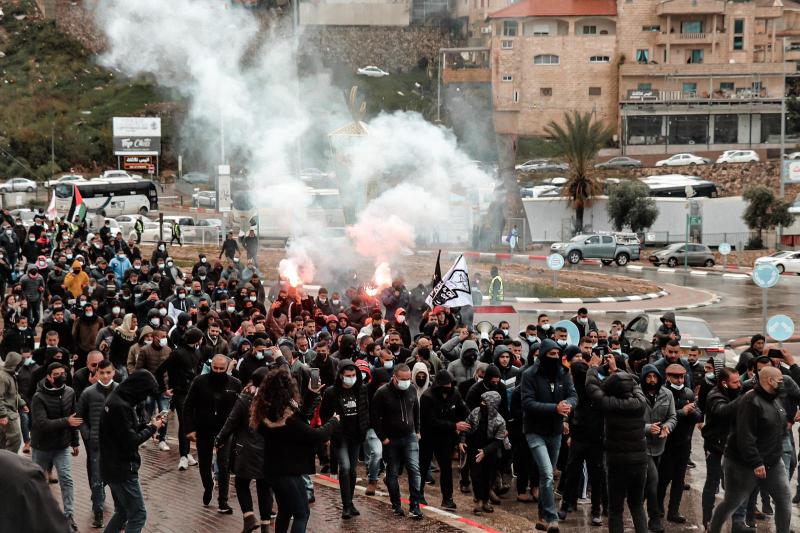 While protests in neighboring towns have slowly dispersed, Fridays of Anger persist in Umm al-Fahm, which was recently subjected to direct police brutality. On February 26, protestors were assaulted with tear gas, rubber-covered bullets, stun grenades, and water canons. At least 40 individuals were wounded.

"The Arab community [falls] into a dormant state when it comes to [societal] issues, [but] there’s perseverance in Umm al-Fahm,’” Omari said. “This is one of our most important issues - protesting will decide our fate when it comes to this pandemic of violence.”

Omari believes that youth at the forefront of this protest movement will bring about change.

Earlier today, Adalah, the Haifa-based legal center for Arab minority rights in Israel, demanded that Israeli police refrain from using force against protestors during the eighth consecutive Friday of Anger protest that is taking place this week.

Adalah will be filing a formal complaint to the Israeli Police Investigations Department. In preparation, it is collecting testimony and evidence that “make clear that Israeli police used extreme, life-threatening tactics and weapons – without any violence on the part of protest participants.”

Legislative elections will be held on March 23 to elect 120 members of the Knesset. In a last-ditch attempt to obtain votes from the people he has so often demonized, Prime Minister Benjamin Netanyahu has vowed to tackle crime in the Arab community. He recently approved a $45 million dollar plan to “address criminal phenomena in the Arab sector.”

The plan would supposedly establish a special Israeli police unit dedicated to crimes committed in Palestinian towns, as well as build five new police stations. A similar proposal made in August of last year promised to increase surveillance of the Arab population and recruit more Palestinian citizens of Israel into the police force.

These proposals - which Netanyahu has made numerous times over the past decade - do not address systemic racism within the Israeli police, nor do they tackle the root causes of crime. Under Netanyahu’s most recent right-wing administration (2009-present) multiple police stations have been opened in Palestinian towns and villages, but the presence of police has either been ineffective, or has resulted in abuses of power.

Joint List leader Ayman Odeh has long denounced police apathy and racism towards his community. He has pointed out the Likud government’s neglect of Palestinian citizens of Israel, while also noting that more funding and police stations will not solve the two-pronged problem of systemic violence and racism.

It is unlikely that Arab-majority political parties will claim much more than 10 percent of seats in the Knesset. Promises about reform ring empty when the right-wing parties will hold the balance of power.

Laura Albast is Palestinian-American and works at the Institute for Palestine Studies in Washington, DC. She holds a BA in Political Studies from the American University of Beirut, and an MA in International Affairs and Communication from Boston University. Her research and translations have focused on public diplomacy, community health work, and media governance in the Middle East.