50 years of the Journal of Palestine Studies, Issue 197

It has been a half century of tenacious endurance, with the propagation of the Palestinian cause across the globe, the reclamation of dignity, the blossoming of art and culture, and the continued pursuit and dissemination of knowledge across the lands of historic Palestine and its diaspora.
–Maia Tabet

We are thrilled to announce the release of issue 197, the first of four issues celebrating the Journal of Palestine Studies’s fifty years as the English-language journal of record on Palestinian affairs.

Issue 1 of Volume 50 features two items that are free to all readers: an article by Elizabeth M. Holt on a fecund period of Palestinian intellectual history revolving around Beirut and Ghassan Kanafani; and Tareq Baconi’s timely essay titled, “Gaza and the One-State Reality.” Articles by Yoav Di-Capua, on the student-forged discourse of global solidarity with Palestine in 1960s Paris, and by Dale Hudson, on interactive modes of virtual Palestinian narrative-making, round out this issue.

Also in this issue, we kick off a year of reflection on the Journal’s role in Palestinian knowledge production since 1971 with short-form essays by Editorial Board members highlighting some of the fifty-year archive’s “Hidden Gems” and “Greatest Hits.” 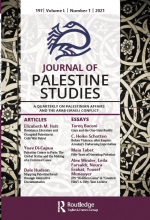