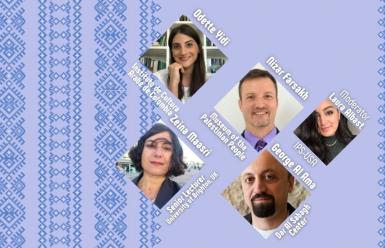 This talk will be conducted in English. It will take place at 12pm EST / 7pm Palestine time.

This webinar provides different perspectives from diverse geographical areas on how to access and use Palestinian artifacts. Their experiences come from communities based in Baranquilla, Colombia, Bethlehem, Palestine, Beirut, Lebanon and Washington DC.

Odette Yidi David: is a Colombian-Palestinian researcher, cultural activist, and adjunct professor of the Department of History and Social Sciences at Universidad del Norte in Barranquilla, Colombia. She holds an MA in Near and Middle Eastern Studies from SOAS, and serves as director of the Institute of Arab Culture of Colombia, an educational organization that promotes inter-cultural dialogue between Colombia and the Arab world. She has curated several Palestinian tatreez and mother-of-pearl art exhibitions.

Zeina Maasri: (PhD) is a Senior Lecturer at the University of Brighton, UK. Before taking up her post at Brighton, she was both an independent graphic designer and an academic at the American University of Beirut (1999 – 2016) in Lebanon. She is the author of Off the Wall: Political Posters of the Lebanese Civil War (IB, Tauris 2009) and curator of related travelling exhibitions and online archival resources and co-editor with K. Bassil, A. Zaatari and W. Raad of Mapping Sitting: On Portraiture and Photography (2002). Her new book, Cosmopolitan Radicalism: The Visual Politics of Beirut’s Global Sixties (Cambridge University Press 2020), explores the transnational circuits that animated Arab modernist pursuits and sheds light on the forgotten trajectories and graphic design practices of its protagonists: Egyptian, Iraqi, Lebanese, Palestinian and Syrian artists who wove through Beirut, in and out of its flourishing art galleries, publishing industry and political movements.

George Al Ama: is an academic, researcher, and collector in the fields of Palestinian art and material culture. An advisor to the Bank Of Palestine Group in the fields of arts, culture and diaspora. Founder of Dar Al Sabagh Diaspora Studies and Research Centre. He is also a consultant to the scientific committee for the Terra Sancta Museum of the Custody of the Holy Land.

Nizar Farsakh: is a trainer focusing on leadership, advocacy and negotiations. He worked for two years at the Project On Middle East Democracy in DC building the advocacy capacity of Arab CSOs and before that he was the General Director of the PLO Delegation in Washington DC for two years. Between 2003-2008 he was advising senior Palestinian leaders including the President, the Prime Minister and various ministries. Nizar holds a Masters in Public Administration from the Harvard Kennedy School and a Masters in International Boundary Studies from King’s College London. He is currently involved in several non-violence initiatives in Palestine/Israel and the US.