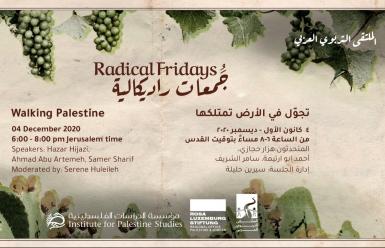 The Institute for Palestine Studies and the Arab Education Forum present "Radical Fridays", a series of webinars on Radical Education in Palestine: Histories and Experiments.

Radical Fridays will explore the various manifestations of Palestinian radical education and what a century of experimentation during colonial expansion and dispossession suggests for radical educational forms. Featuring teachers, organizers, scholars, and students, we hope this conversation will contribute to regional and global mobilizations for a new kind of education: just in its composition and radical in its aims.

The act of walking has long constituted an important practice of radical education. Walking locates walkers in place, resituating them in relation to past, present, and future, creating a link between where we are going and where we have been. The act of walking becomes even more important in settler colonies which are premised on displacing indigenous peoples from the land. In Palestine, walking has long been used as a practice of narration and resistance. Palestinians walked to commemorate - the Nakba - or to celebrate - the Land day - or to reclaim the land – witness the many marches of return around Palestine. These forms of collective walking represent important moments of political praxis and subject formation. Walking as a political act thus harnesses the power of visual spectacle, symbolic ritual, and transformative praxis—while simultaneously aiding in the creation of a sense of collectivity and shared trajectory. In this webinar, we focus on walking as a practice of radical education focusing on the experience of Tajwal Safar and the return walks.

If you are currently working on the topic of radical education in Palestine or have relevant experience that you would like to share, please get in touch: [email protected].

This webinar will be in Arabic and will be live-interpreted into English to ensure the widest possible outreach not only to Palestinians in historical Palestine and the diaspora but also to other pioneers in radical education all over the world.

The sessions will be recorded and made available online.

Hazar Hijazi was born in Akka and has an MA in Art Therapy. Hazar works as a social worker and therapist. She is an activist who co-founded “For a National and Civil Movement”, a Palestinian women movement in 48 Palestine.

Samer Sharif was born in Jerusalem. He studied Journalism and Political Science at Birzeit University. He is one of the founders of Tajwal Safar and works for the Arab Education Forum in Palestine. Samer works in the art and cultural production field in Ramallah and Jerusalem.

Ahmed Abu Artema is a Palestinian journalist and peace activist. He is the author of the book Organized Chaos and numerous articles and one of the founders of the Great Return March in Gaza. He is a refugee from Al Ramla village in Palestine and lives currently in Gaza. 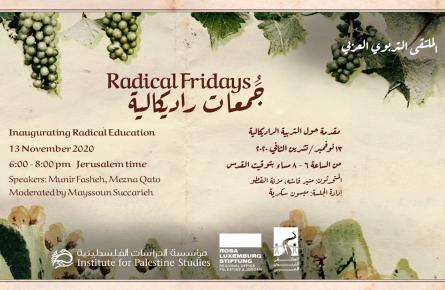