The Deadly Embrace: Annexation and Walling

On January 28, 2020, US President Donald Trump released his Middle East Peace Plan - which he dubbed ‘The Deal of the Century’. Met with outright rejection from the Palestinian leadership, the Trump plan allowed for the annexation of 30% of occupied Palestinian territory in the West Bank, including Israeli settlements and much the Jordan Valley area.

In a surprising turn of events, Israel and the United Arab Emirates announced a historic deal to publicly normalize relations, in exchange for the suspension of plans to formally annex the Jordan Valley. Bahrain followed soon after, with its own normalization deal. However, the expansion of settlements in the West Bank and illegal appropriation of Palestinian land continues to this day, as it has since 1967 under both left- and right-wing Israeli governments.

This began with East Jerusalem, which was annexed in 1967 (de facto), and de jure in 1980. In contravention of international law, Israel declared Jerusalem its united and indivisible capital annexing seven square kilometers of East Jerusalem and over 60 square kilometers of the West Bank that surrounds it. Though the rest of the West Bank has not been de jure annexed, Israel has carried out an incremental process of annexation since 1967, particularly after the Oslo Accords which gave Israel full control of approximately 60% of the occupied West Bank.

This selection of articles published over the last two decades in the Jerusalem Quarterly allows readers to see how Israel’s creeping annexation of Palestinian territories by creating facts on the ground, has developed over the decades. In ‘Stacking the Deck: The Implications of the U.S. Embassy Relocation,’ (Spring 2000), Walid Khalidi foreshadows some of the consequences of relocating the U.S. embassy on final status negotiations in the peace process. Issa Kassissieh examines Europe’s shift from a hardline to a passive policy towards Palestine and Jerusalem, and its emboldening impact on the Israeli right wing in ‘Time to Change: The European Role in Jerusalem,’ (Winter 2001). In Jerusalem Fifty Years of Occupation (Winter 2017), Nazmi al-Jubeh analyses the devastating impact of Israeli legislation has had, extending sovereignty over the land but not over the Palestinian population in East Jerusalem. Hanan Awad draws attention to the E1 plan, designed by Israel to divide the West Bank into two parts in alarming developments which have seen Israel attempt to connect the third largest illegal Israeli settlement, Ma'ale Adumim, to Jerusalem. Completion of the E1 plan would see the destruction of twenty-three Palestinian Bedouin villages, and in her in her Letter from Jerusalem, Khan al-Ahmar: The Onslaught against Jerusalem Bedouins (Winter 2018), Awad examines the communities being directly affected.

Several of these selections examine the building of the so-called Separation Wall in the greater Jerusalem area, and its socio-economic impact on the Palestinian community divided by its construction. In the Seam Zone Walaja’s Fate Between Jerusalem and Nowhere (Spring 2012), Ruba Saleh, examines the village of Walaja, which has faced the threat of complete isolation and alienation by the encroaching wall since 2003. Christine Leuenberger draws comparisons between the separation barriers in Jerusalem and Berlin and studies the varied meanings of the walls for different social groups in terms of their function and consequences in Mapping Divided Cities and Their Separation Walls: Berlin and Jerusalem. In This Wall Speaks: Graffiti and Transnational Networks in Palestine, Ashley Toenjes analyzes how graffiti is used as a tool by Palestinians and others to communicate messages from within Palestine to transnational audiences. 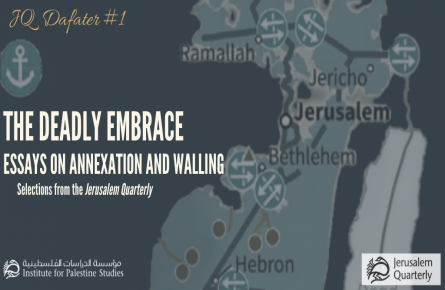