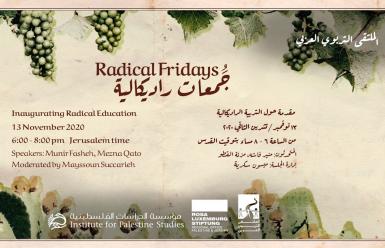 The Institute for Palestine Studies and the Arab Education Forum in cooperation with the Rosa Luxemburg Stiftung present "Radical Fridays", a series of webinars on Radical Education in Palestine: Histories and Experiments.

Radical Fridays will explore the various manifestations of Palestinian radical education and what a century of experimentation during colonial expansion and dispossession suggests for radical educational forms. Featuring teachers, organizers, scholars, and students, we hope this conversation will contribute to regional and global mobilizations for a new kind of education: just in its composition and radical in its aims.

If you are currently working on this topic or have a relevant experience that you would like to share, please get in touch.

Interpretation will be provided in Arabic and English to ensure the widest possible outreach not only to Palestinians in historical Palestine and the Shatat, but also to other pioneers in radical education all over the world.

Munir Fasheh was born in Jerusalem, Palestine in 1941; he studied and taught math for many years; got his doctorate from Harvard in education and worked in Birzeit University. During the first Palestinian intifada (late 1980s), he left academia and established Tamer Institute for Community Education. In 1997, he established the Arab Education Forum within Harvard University’s Center for Middle Eastern Studies.

Mezna Qato is Margaret Anstee Fellow at Newnham College, University of Cambridge. She is a historian of the modern Middle East, and in particular of education, migration, development, and social histories of Palestinian refugee and exile communities. She was previously Junior Research Fellow at King’s College, Cambridge and Spencer Fellow at the National Academy of Education. She leads a research network on Archives of the Disappeared at the Centre for Research in Arts, Social Sciences, and Humanities at the University of Cambridge.