Jaffa: The Rise and Fall of an Agrarian City

“The gateway to Palestine”, as it was often called, Jaffa was the primary entryway for travellers who arrived to the country by sea in the nineteenth and early twentieth centuries. For many biblical scholars and pilgrims who wrote about their voyages to the Holy Land, the anguish of “landing at Jaffa” was their opening scene. Large vessels were forced to dock half-a-mile away from the rocky reef, offloading their passengers and cargo onto small boats that carried them to the city [Figure 1]. Local demands for improving harbor conditions were only partially met, initially by the French company who operated the Jaffa-Jerusalem railway in the late-Ottoman era, and later by the British imperial authorities in the 1930s. 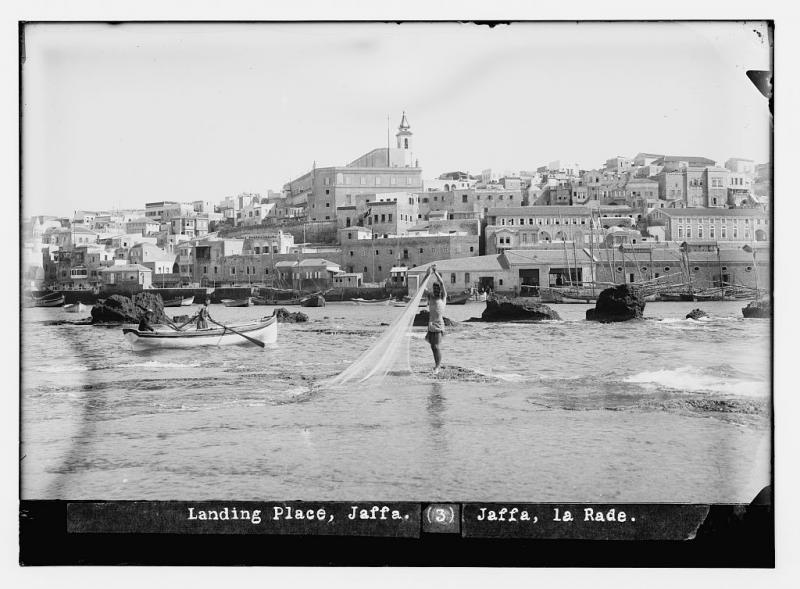 The sustained prominence of Jaffa's port, at a time when the rival ports of Haifa and Beirut offered steadier landing conditions, rested not simply on its situation within its broader regional geography, but mostly on specific developments taking place in its vicinity. As with other 'agro-cities' in the Arab Mediterranean region, Jaffa's dependence on agricultural surplus was essential to its development as a hub for trade and light industry. In Jaffa, crop yields came not from villages, but from its surrounding belt of urban citrus gardens [Figure 2]. These gardens had fenced the walled city since at least the mid-eighteenth century, but it was only in the mid-nineteenth century that they began to witness substantial levels of growth, transforming both the city and its suburbs. 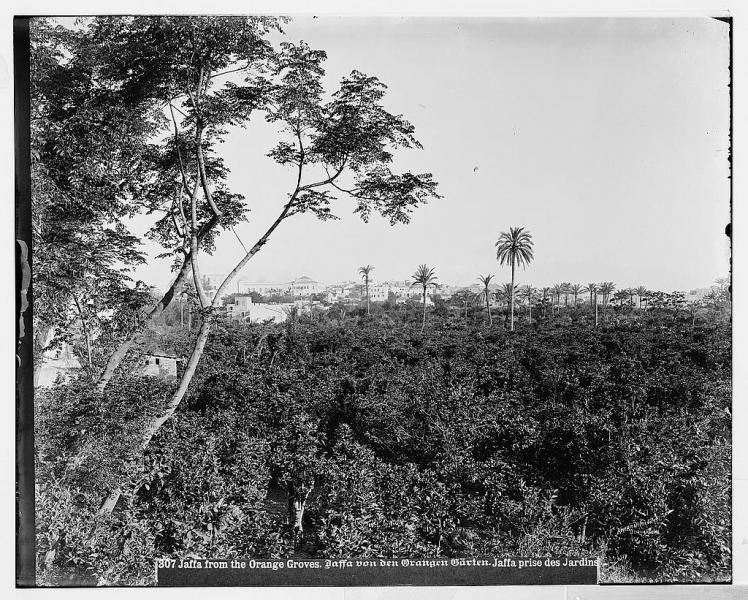 The expansion of Jaffa's citrus plantations was the outcome of both local and global influences. Locally, Arab farmers were able to create a new mutation of oranges, known as shamouti, with a sweet taste and thick peel that made it especially suitable for long distance export. This innovation, along with the opening up of new global export markets, contributed to Jaffa's bourgeoning citriculture. Between 1850 and 1880, the orange-grove area of Jaffa quadrupled. By the end of the century, orange groves became the most lucrative capital investments in the city, and citrus became Palestine’s principal export.

In Jaffa’s outskirts, two distinct yet interdependent land typologies emerged: the bayyārat and the sakināt [Figure 3]. As their name, derived from the Arabic word bi'r (‘water-well’) suggests, the bayyārat were large irrigated citrus gardens whose cultivation was largely possible due to the coast’s rich groundwater resources and human and animal-operated Persian wheels. Most of the bayyārāt also included mansions: their owners were either foreign investors or notable elites from Jaffa, Jerusalem or Beirut [Figure 4]. The residences functioned as summer villas. 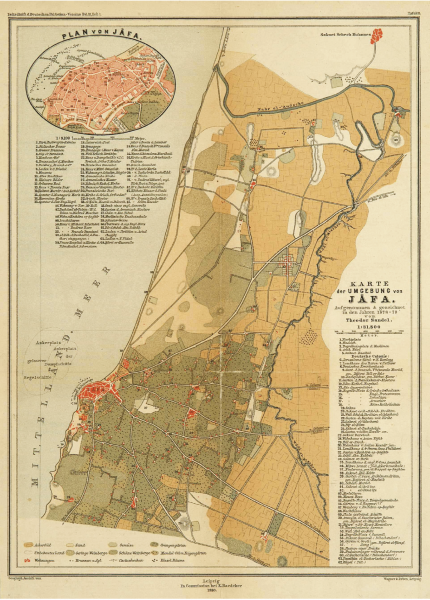 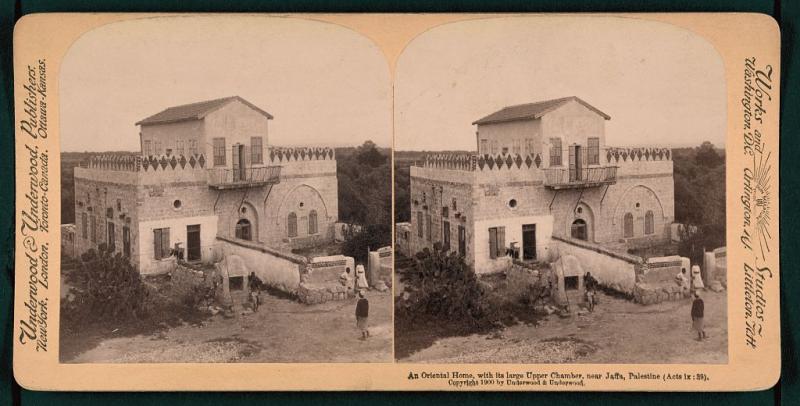 The wage farmers who cultivated and maintained these plantations, meanwhile, typically did not reside in the bayyārāt. In the mid-nineteenth century, a new settlement typology emerged in the suburbs of Jaffa: the sakināt. The sakināt, a dense settlement that was unique to Jaffa, was mainly inhabited by migrant peasant communities. These included regional migrants, mostly from Egypt, as well as internal economic migrants from Palestine’s hinterlands, particularly after the implementation of the 1858 Ottoman land privatisation codes and the disenfranchisement of many Arab peasant communities from their lands.

The material investment in land cultivation in Jaffa’s suburbs and the economic development it provoked had an immense impact on the city. With substantial population growth and the expansion of trade and industry, the fortified city could no longer be confined to its historical boundaries. In the 1870s, after persistent local demands, a second gate was opened in the city’s walls to “meet the city’s development, its expanding trade sector, its doubling number of its inhabitants, and its increasing density.” Within a few years, the walls were gradually brought down. By the turn of century, Jaffa was no longer a fortified city - its surrounding moat had been completely filled, paving the way for a new age of extra muros urban development.

After the walls of the city were brought down, the area outside the city’s original main gate to the east turned into a bustling new center. A bazaar, a wide avenue with a monumental clocktower, and administrative buildings to house the city’s new civic institutions were all built there [Figure 5]. The concentration of Jaffa’s citrus gardens east of the new center, where water was abundant, pushed most of the city’s new developments south and north along the seaside. To the south, the new middle- and upper-class Arab district of Ajami rose, with a hybrid of local and imported architectural styles and aesthetic choices. The city’s new northern district of Manshiyyeh, meanwhile, included an ethnically mixed population of local and migrant residents. Unlike affluent Ajami, Manshiyyeh was primarily a working-class neighbourhood. 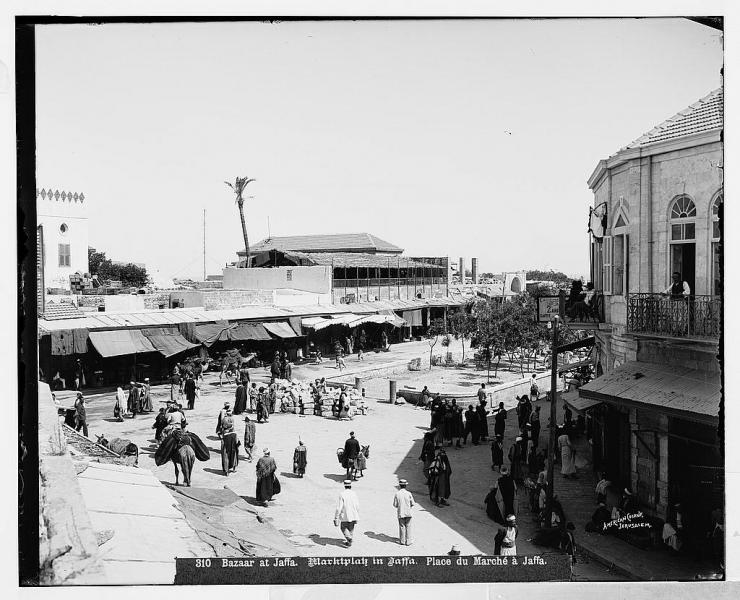 In the 1920s and 30s, numerous new commercial and industrial sectors emerged in Jaffa. The city had turned into the central hub for Palestine’s cosmopolitan urban culture. These developments, however, did not hinder the status of citriculture. Between 1926 and 1939, the size of the citrus-cultivated lands in Jaffa’s vicinity increased from 30,000 dunams to 300,000 dunums, and the number of oranges exported increased from 2 million boxes to 15 million boxes. While modern technology proved useful in certain aspects of cultivation and shipment, Jaffa’s expanding citrus industry remained labor-intensive. In addition to the wage farmers employed in the bayyārāt, a great number of specialized workers, including men, women and children, were employed through the different stages of preparing the oranges for export: harvest, storage, delicate wrapping, boxing, transport from the eastern groves to the port area, and transport from the harbor via small boats to the large vessels anchored in the sea [Figure 6]. 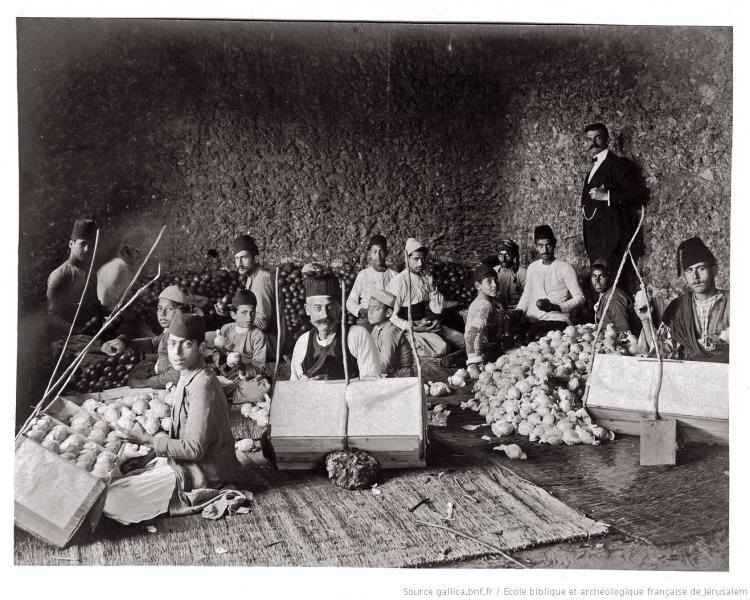 In the 1940s, the rapid changes in Jaffa’s cityscape led the municipal council to hire Egyptian urban planner, Ali al-Miliji Masʿud, to prepare a new masterplan for the expanding city. The ambitious plan included schemes for new housing projects, transportation infrastructures, public parks, and the improvement of the city’s waterfront. The proposal positioned Jaffa at the forefront of urban development in Palestine and envisioned its future within a broader regional landscape. But as Palestinians were planning their own futures, other plans were also being made for them.

In November 1947, just a few hours after the United Nations Partition Plan for Palestine was announced, Zionist militias commenced organized attacks against the city, paving the way for the ethnic cleansing of its Arab population. To this day, the Palestinians of Jaffa still live under the dual threat of systematic depopulation and colonial gentrification. A once thriving center of Arab modernity, Jaffa has since become a monument of loss, and a memory of what could have been.