Plonski, Palestinian Citizens of Israel: Power, Resistance and the Struggle for Space 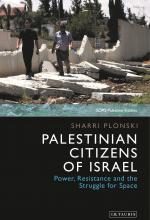 At first glance, the book Palestinian Citizens of Israel appears to be an exploration of the multiple strategies Palestinians exercise in making claims to their own spaces, politics, and cultures while subjected to colonial conditions. However, Sharri Plonski's book is more than just an exploration. In fact, it contextualizes and historicizes the resistance of Palestinian citizens of Israel (PCIs) to the state's continuous practices of displacement, as well as their persistence in holding on to their spaces in the face of dispossession. The book contours the practices and policies that the Israeli state—driven by Zionist ideology—orchestrates to further displace, dispossess, and dominate Palestinians. The author examines how the state perceives Palestinians who live within the 1948 armistice lines (that is, inside Israel proper) as a threat to Jewish demographic superiority, regarding their spaces as a disruption to geographic continuity, and subjects them to further erasure, containment, relocation, or segregation. The book builds on a rigorous and well-researched study anchored on over one hundred interviews conducted with Palestinian dwellers, activists, lawyers, academics, and NGO employees. It also relies on material collected from the Israeli government's policy documents, the media, and international reports.

Drawing on theoretical frameworks in spatial, border, and frontier politics from the works of Oren Yiftachel, David Harvey, and Henri Lefebvre, Plonski argues that what undergirds the PCIs' struggle is the production and navigation of their spaces and frontiers from both inside and outside the state's discourses and institutions, which she describes as “unruly politics” (pp. 4–7). In this “unruly politics,” PCI resistance oscillates between state spaces and subaltern spaces, relying on and using practices that enable them to reclaim their land and cultivate or expand their frontier. The book takes up this notion of “unruly politics” through three case studies in chapters 2, 3, and 4: the struggle for housing in Jaffa, land confiscations and Judaization in the Galilee, and the displacement of Palestinian Bedouins from the so-called unrecognized villages in the Naqab.

The author relates that after the expulsion of the majority of Palestinians from Jaffa and the resettlement of Jewish Israelis in Palestinian homes and spaces in and after 1948, Jaffa became a “mixed city” in Israeli eyes. Palestinians' struggle against the gentrification of their spaces and eviction from their homes functions as pushback against Tel Aviv municipal discrimination. Plonski argues that the confrontation in Jaffa is informed by dualities and contradictions that force Palestinians to use the language of the state's institutions while existing outside of them. The PCIs' politics of resistance and their continuous attempts to reconstruct their spatial frontiers in the face of their unsteady relationship to the state constitute the ambiguity that foregrounds this “unruly politics.”

In terms of the Galilee, it is clear that the author views the history of organizing there as centered on the formative March 1976 moment of Land Day and its aftermath, which, she argues, changed how the spatial struggle is negotiated for PCIs. It forced the state to contend with direct challenges from Palestinians (p. 153). The Galilee, she argues, oscillates between (mostly) an enclave and (to a lesser extent) a periphery, where Palestinians have turned inward and have been able to flourish because of and despite segregation from Jewish spaces.

In the Negev, the deep-rooted Zionist imagery of an empty desert permeated the state's relationship to the area's Palestinian dwellers, who were subjected to dispossession and displacement in 1948. While the state regarded the Negev as mawat (dead) lands, Bedouin history there tells of a rich and deep connection to the land, which is embodied in the communities' transgression of state-imposed ethnonational enclaves and their dispersal in small, fragmented territories. For example, in al-‘Araqib the struggle is not simply about state recognition of the unrecognized villages but also about return to lands from which villagers were displaced. Hence, Plonski successfully argues, unrecognized land spaces that exist between legality and illegality in spatial politics produce a bifurcated reality: on the one hand, spaces are reclaimed and revisibilized by the struggle on the ground (in the form of physical returns and reconstruction of villages); and on the other, official recognition of Palestinian occupancy of the land rests on the state's top-down system of approval, a process that is perpetually suspended (pp. 203–4).

The book centers on the resistance that contests settler-colonial violence by its disruption of the everyday with demonstrations, strikes, mobilizing, or rebuilding. Here, I would like to amplify this notion and suggest that contesting settler-colonial violence often takes shape within the everyday and the ordinary as much as it does in organized events such as protests.

Plonski's analysis diverges from the existing and large body of Palestinian scholarship that utilizes the framework of settler colonialism to decipher the convoluted politics that PCIs have to navigate. Engaging with decolonial and settler-colonial theoretical frameworks would open the way to thinking more expansively about resistance politics, not simply as functioning through a logic of unruliness, as Plonski holds, but as epistemologically unintelligible to the Western colonial polity. For example, kinship and family ties remain among the strongest forms of political mobilization in Palestine. The spatial-political continuity that the Galilee has maintained by propagating kinship ties enables Palestinians to function as a wide network of (indigenous) connectivity. This is true not only of the Galilee but also in Jaffa and the Negev, as well as the Triangle and Jisr al-Zarqa (both of which Plonski leaves out of her study). Thus, the dominance of patrilocal spacemaking allows Palestinians to build and thrive despite state-led underdevelopment, erasure, or destruction of Palestinian homes and spaces.

Nayrouz Abu Hatoum is assistant professor in sociology and anthropology at Concordia University, and a founding member of Insaniyyat – Society of Palestinian Anthropologists.