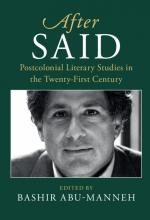 Theoretical paradigms are both instruments of ontological clarification and objects of hermeneutic scrutiny. The latter function keeps the former provisionally intact while ultimately preventing the total calcification of outmoded epistemologies within intellectual formations. This becomes especially crucial when the epochal character of a body of knowledge shifts from being in the nature of “innovation” to that of “canonization,” or “tradition.” All schools of thought, including the most foundational, must be subjected to healthy skepticism even as they retain some degree of relevance to the present moment.

Twelve critical essays (including an introduction by Abu-Manneh) are dedicated to exploring these issues. And while not always consonant with one another, the essays do an impressive job of imparting some key features of Said's intellectual and political commitments. Several critics revisit the well-known account of how Said's critical and political awakening can be attributed to the aftermath of 1967, with the Arab states resolutely defeated and Israel expanding its settler-colonial project to include military occupation (Abu-Manneh, p. 1; Joe Cleary, p. 129). Also, several pieces draw a sensitive portrait of the coterminous, even messy, relationship between Said's criticism and political activism.

Perhaps, such accounts suggest, one of Said's most powerful legacies is not an example of fidelity to an anti-colonial struggle alongside aesthetic humanism so much as a performance of their mutual imbrication and an attempt to illuminate it. This is why Abu-Manneh can write in his introduction of Said's “political humanism” (p. 5), a form of humanism that grappled with culture's complicity in imperial and colonial subjugation, or why Dougal McNeill, in his essay “Postcolonial and Transnational Modernism,” can brilliantly describe Said's political outlook as “much more an aesthetic sensibility than the result of a detailed political strategy” (p. 151). McNeill further observes that Said “persistently culturized colonialism and imperialism” (p. 151, emphasis in original), and the collection's steady attention to the relationship between Said's political and critical commitments also makes it possible to formulate the obverse of this statement: Said looked for and registered, occasionally inchoately, the colonial and imperial imprints upon culture itself, a tendency that resulted in an idiosyncratic and at times even obscure formalist ethics that privileged modernism over realism and remained skeptical of the pretenses underlying whole or finite literary genres in place of scattered and fragmentary artistic experimentation (Abu-Manneh, p. 13).

To that end, one of the core strengths of this collection is its ability to offer informed critiques of Said's methodologies drawn directly from the oversights particular to his critical-ethical orientation. Also noteworthy in this regard is Lauren M. E. Goodlad's contribution, which paraphrases well the argument concerning the ramifications of Said overlooking the more immediately materialist components of imperialism: to do so, Goodlad argues, is to afford imperial logic an “almost metaphysical” character and homogenize imperialism and colonialism (p. 89). And in “Orientalism Today,” Saree Makdisi notes that the distinction between “imaginative” and “positive” geographies that Said makes in Orientalism is in fact never completely resolved by the text's conclusion (p. 179). Where do “imaginative” geographies end, and “positive” ones begin—if at all? In the end, Makdisi suggests this ambiguity could be the very result of Said's main argument, which is, in the final analysis, an attempt to intervene in the phenomenon whereby foreign encounters are inflected by a common symbolic and linguistic archive (p. 182).

However, the collection's critique at times veers too much toward exceptionalism. Abu-Manneh is correct in observing that the contradictory nature of Said's twinned debts of gratitude to Eric Auerbach and Michel Foucault in Orientalism “have been widely discussed” (p. 4). But generally disavowing the genealogical webs within which Said's work takes shape evacuates the analyses of some potentially useful background, such as how Said's work was made possible not just by Auerbach and Foucault, but also by Raymond Williams (to whom the collection is co-dedicated, alongside Said), who revolutionized literary criticism by situating culture as its own site of sociomaterial production. At times, the essays also grow repetitive in their critiques of Said's evasion of Marxian frameworks.

Nevertheless, After Said is an important and timely intervention into postcolonial studies and academic convention. As such, it is well worth reading.

Omar Zahzah is a Omar Zahzah is a member of the Palestinian Youth Movement and the incoming education and advocacy coordinator for Eyewitness Palestine. Zahzah holds a doctorate in comparative literature from the University of California, Los Angeles.