Shalhoub-Kevorkian, Incarcerated Childhood and the Politics of Unchilding 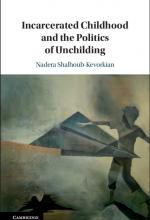 There is a symbiotic and self-sustaining relationship between political violence and the abuse of children's rights, be it in India, Mexico, Australia, Europe, the United States, Canada, the Middle East and North Africa region, or elsewhere. Global and state power depend—among other sources—on the domination and exploitation of children. Thanks to groundbreaking work by Hebrew University's Lawrence D. Biele Chair of Law Nadera Shalhoub-Kevorkian, there is now a term to describe the process by which children serve as political capital (that is, expendable currency to affirm regimes of control and achieve government goals). This word is “unchilding.” Terminology is crucial for drawing attention to important matters, as well as elaborating on nuances.

Building on her previous book about Israeli theologies and ideologies of security, Incarcerated Childhood and the Politics of Unchilding places children in the center of Israeli settler colonialism's interworkings. “Unchilding” refers to the authorized eviction of children from childhood for political goals and is maintained by a violent, racist, sexist, and classist machinery that exists everywhere and always. Shalhoub-Kevorkian crafted this term in the context of the Zionist settler-colonial project which uses Palestinian children, from conception through death, as tools to build the State of Israel. She argues that to eliminate the next generation of Palestinians, Israel treats Palestinian children as both nobodies who are unworthy of global children's rights and as dangerous and killable bodies needing to be caged and dismembered, physically and mentally. This process operates through a self-propelling ideology of sociolegal claims, economic and securitized profit, the language of the sacred, and spatiotemporal control.

The overall purpose of Incarcerated Childhood is to demonstrate that politics cannot be separated from issues relating to childhood. Historians of childhood in the West already know this to be true, as there are numerous works that show how the emergence of the modern concept of childhood went hand-in-hand with the appearance of the nation-state, and manifested on the uneven lines of race, class, and gender. The author's contribution is the urgent plea for the field of political science to take childhood seriously and for related scholars to look at childhood as a political issue, not just a psychological and developmental one. Interestingly, the author never defines childhood, but we can assume her definition is similar to that in the Declaration of the Rights of the Child.

Shalhoub-Kevorkian makes the convincing argument that the Israeli state refuses to read Palestinian children as children. “Tragic incidents” (p. 110) occurring to Palestinian children are dismissed as unfortunate but inevitable collateral damage, or as a necessary way for Israel to protect itself from dangerous Palestinian children. Against such decontextualization, the writer shows, for example, that the 2014 Israeli aerial bombardment that took the lives of the Bakr boys on the Gazan beach was just one among many systematic Israeli state crimes that function on “an industry of killability of the unwanted and unregistered, of the already-dead” (p. 114). She provides numerous other examples to prove that systematic state crimes against children are nothing new, ranging from the Negev Bedouins during the Nakba to the present-day caging of Palestinians in Hebron and state-ordered house arrests in Jerusalem (pp. 96–97). Childhood is not a given for Palestinian children, “it is something that must be determined, retrieved, and understood within a complex web of implications mandated by the dynamics of power that are in play in a settler state” (p. 117). Yet, as devastating as unchilding is, Shalhoub-Kevorkian shows that children have the power to interrupt the sociopolitical order. And scholars, activists, and policymakers, she exhorts, must show the political gains the state has in abusing, killing, and maiming Palestinian children.

True to the message of her book that children matter, Shalhoub-Kevorkian adopts a methodology that puts their voices front and center. From children's letters to children's conversations on the streets where they walk to school, the author uses multiscalar evidence to show that Israeli violence against children is unquantifiable and all-pervasive through time and space. Her expansive grasp of the literature on domination and settler colonialism allows her to situate the words of Palestinian children alongside those of Jasbir Puar, Suvendrini Perera, Sherene Razack, and Denise Ferreira da Silva. Palestinian children understand, at their own level, the complex concepts of biopolitics, necropolitics, the dispensable Other, the right to maim, the nonhuman, the limits of the human, and the nobody. Here the author uses her pen as a conduit for children's insights.

It is now up to scholars from across the Middle East and the world to advance our understanding, through comparative analysis, of the process of unchilding in Palestine and beyond. Many contemporary political issues are linked to unchilding. Scholars need to further explore the connection between unchilding and the millions of refugee children in Europe who are fleeing the Middle East for the very reasons Shalhoub-Kevorkian outlines. Moreover, it is worth looking at the ways in which the Arab Spring is a response to the decades of unchilding experienced by young people across the region. On a more global scale, scholars need to link the structures of oppression that are operating on children at the United States-Mexico border with those operating on children in places like Yemen. It is essential that political scientists, historians, economists, and anthropologists make the term unchilding a part of their tool kit of analysis of the modern world. And we must all find ways to give voice to the children and other actors who find ways to interrupt unchilding on a day-to-day basis, despite the odds.

Heidi Morrison, associate professor of history at the University of Wisconsin, La Crosse, is the author of Childhood and Colonial Modernity in Egypt (London: Palgrave, 2015) and the volume editor of The Global History of Childhood Reader (New York: Routledge, 2012).