Netflix Series Fauda as an Effective Tool of Israeli Propaganda

Fauda is an Israeli-produced television series that first aired in 2015. It was soon picked up by the streaming service Netflix and is currently in its third season. In 2017, the New York Times named Fauda one of the best international TV shows of the year. It is undoubtedly the most widely viewed Israeli cultural production in decades. It may even be the most popular creative work from or about Israel since the 1960 Hollywood film Exodus (based on the Leon Uris novel of the same name).

If Exodus popularized the Israeli version of the Nakba and the establishment of the state of Israel, disseminating it to a massive audience, Fauda could do the same for Israel’s apartheid-like system, promoting an alternate version of reality that serves as an effective tool of Israeli propaganda.

The series focuses on a unit of special forces in the Israeli military, known in Hebrew as Mista’arvim, which translates roughly as Arabized or Arabists. The unit consists of military operatives who disguise themselves as Palestinian Arabs to infiltrate Palestinian society as civilians. They’re tasked with collecting information and abducting or killing Palestinians living under occupation. The television series has been critiqued in the media, but has also received a preponderance of favorable reviews. Despite extensive coverage, three aspects of Fauda have not received the attention they deserve.

In this series, as in official Israeli discourse, Mista’arvim serve a “counter-terrorism” purpose. Yet, the TV series never mentions that the very existence of the Mista’arvim runs counter to the ethics of war. Under International Humanitarian Law (IHL), military forces are forbidden from impersonating civilians to kill, injure, or capture them, and violation of this principle constitutes the war crime of “perfidy.” Yet the ethical and legal transgression that underlies the unit’s very purpose and goals does not appear to be acknowledged in the TV show.

IHL also requires belligerents to distinguish between combatants and non-combatants, and to refrain from attacking non-combatants, but almost every major operation that the unit conducts involves brutalizing civilians or invading their homes. The series also normalizes the use of torture on prisoners and abductees, who are routinely subjected to gratuitous physical violence. This may seem to be a frank admission on the part of the show’s creators of the widespread use of torture by Israelis against Palestinians. But the use of violence against Palestinian detainees is so frequent that the viewer is liable to become desensitized. Moreover, some of the worst excesses are often objected to by Israeli actors who are not engaging in them, as if to imply that these actions are the results of a few Israelis going rogue rather than a state-sanctioned practice.

The Mista’arvim date back to the pre-state days and can be understood, in part, in the context of the Israeli attempt to take on and erase Palestinian culture. There is a longstanding trend within Zionism not just to displace Palestinians from their land, but to replace them and appropriate their culture. The military unit represented in Fauda can be understood as a manifestation of this tendency, even though its avowed aim is to eliminate and capture Palestinian militants. In the course of accomplishing their missions, members of the unit speak Arabic, wear Arab dress, and adopt Palestinian personas. The main Israeli protagonist, Doron Kavillio, infiltrates Palestinian society in the first season and even sleeps with the wife of his Palestinian nemesis, literally displacing him in his marital bed.

Notwithstanding these elements of cultural appropriation, the impersonations in Fauda are often unintentionally humorous, at least to a Palestinian viewer. Doron’s Arabic is so heavily accented with Hebrew that it stretches credulity to imagine that he is able to convince anyone that he is actually Palestinian. Similarly, the disguises that members of the unit regularly don are often amateurish, leaving the impression that simply throwing on a keffiyeh or hijab will immediately enable an Israeli soldier to pass in Nablus or Ramallah. These practices not only suggest that manifestations of Palestinian culture are shallow and easy to mimic, but also that it’s not hard to pull the wool over Palestinian eyes.

The Erasure of Military Occupation

Although checkpoints are frequently seen, the military occupation is barely mentioned in Fauda, and the apartheid wall and settlements are simply not depicted. Moreover, Palestinian “terrorists” are shown freely crossing into Israel, carrying out operations, and driving back into the Occupied Territories, as if they do not belong to the most tightly controlled and highly surveilled population in the world. Occasionally, they use fake IDs or mutter a few phrases in Hebrew, and this is supposed to allow them to evade the all-encompassing reach of the Israeli military and convince the soldiers that they are actually Israeli settlers. Moreover, the attacks by Palestinians in the series are not only conducted by Hamas, but also by ISIS, which is falsely presented as active in Palestine.

The parallel universe created by Fauda frames Palestinians as terrorists who regularly attack Israeli communities, forcing desperate soldiers to infiltrate Palestinian society to prevent ticking time bombs from exploding. This depiction of the conflict is a travesty for anyone who knows what things are actually like in the Occupied Territories, but it may well be effective in convincing naïve viewers.

The show’s creators have repeatedly stated that they are simply making a creative work from the Israeli point of view and that their aim is not to represent the Palestinian narrative. This disavowal has even been presented in the guise of not presuming to speak for the Palestinian people or to coopt their voice. However, the problem with Fauda is not just that it presents an interpretation or value judgment that reflects an Israeli perspective, but its total transformation of reality and its effective erasure of the world’s longest-standing military occupation.

Muhammad Ali Khalidi is a professor of Philosophy at York University in Toronto, and has worked on philosophical aspects of the question of Palestine. 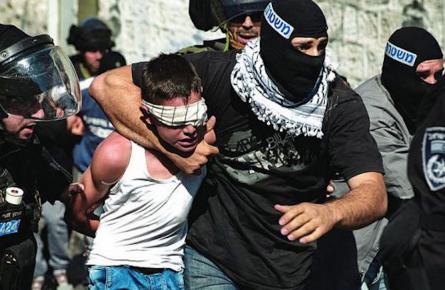