53 Years Since the Naksa, Selections from the Journal of Palestine Studies

This selection of articles from the Journal of Palestine Studies provides incisive examinations of the Arab-Israeli War of June 1967 (known in Arabic as the Naksa) and its consequences for Palestine. The war lasted just six days but the subsequent decades have shown it to be one of the most consequential events in the history of Palestine. On June 5th, 1967 Israel launched preemptive airstrikes against Egypt’s military airfields, decimating almost its entire air force, and in the following days defeated both Jordanian and Syrian forces, in the process occupying the Sinai Peninsula, Gaza Strip, West Bank, East Jerusalem and the Golan Heights.

After hostilities ceased, on November 22, 1967, the United Nations Security Council passed Resolution 242 to attempt to establish a lasting peace in the region and force Israel to withdraw from the areas it had occupied. Israel defied the resolution and quickly began implementing new realities on the ground in contravention of international law and established itself as a permanent occupying force. East Jerusalem and a large swath of territory around it was incorporated into Israel immediately after the 1967 war (as later were the Golan Heights). Palestinians were forced from their homes in East Jerusalem, and over 100,000 Palestinians from the West Bank were made refugees in the wake of the June 1967 War.Many of those new refugees were removed by force, as Israel destroyed and bulldozed several Palestinian villages so that their inhabitants could never return, while refugee camps in the Jordan Valley were also forcibly emptied of their inhabitants. Rather than honor their pre-war assurances to the international community that they would not expand their borders as a result of the conflict, Israel instead greatly expanded its territorial ambitions.

These events set the scene for “Israel’s 1967 Annexation of Arab Jerusalem: Walid Khalidi’s Address to the UN General Assembly Special Emergency Session, 14 July 1967,” a historical document published in the Journal in 2012. It provides a window into how the political context for Israel’s occupation of Arab territory has both changed and remained the same. Khalidi’s speech, delivered just a few weeks after the cessation of hostilities, finds Jerusalem under an increasing Israeli stranglehold and excoriates a toothless, ineffective United Nations General Assembly failing to hold Israel accountable. The speech remains a stunning indictment of the United Nations and even reads today as a much-needed dose of reality for the world governments that still allow Israel to act essentially as a rogue state.

Noura Erakat’s “Taking the Land without the People: The 1967 Story as Told by the Law,” provides a similar indictment of the systems of international law and clearly documents how Israel has used UN Resolution 242 to consolidate its control over territory that was taken illegally in the wake of June 1967. Erakat effectively demonstrates how the “elision of Palestinian peoplehood remains central to the ongoing conflict as well as to Israel’s settler-colonial mechanisms of dispossession, removal, and concentration of the native population.” She finds that Israel has been able “to steadily grab Palestinian land without absorbing the Palestinians on the land” and use the law to “both to avoid censure for outright territorial conquest, and more importantly perhaps, to build up its Jewish demographic majority” at the cost of Palestinian rights and statehood. These insights remain relevant in light of Israel’s current plans for annexation of as much as 30-40% of the land area of the West Bank without giving citizenship rights to the population, under the rubric of taking the land without the people.

The final entry, “The June 1967 War and the Palestinian Refugee Problem” by Tom Segev reveals how Israeli officials grappled not only with the Palestinian refugees of the June 1967 War, but also with their realization of the massive numbers of displaced Palestinians in 1948 now residing in Gaza and throughout the West Bank. Whereas officials previously tried to cover up the actual number of Palestinians displaced during the Nakba of 1948, some of these refugees were now an unavoidable reality that came with newly occupied territory. Segev tracks how Israeli officials grappled with their responsibility for the Palestinian refugee problem and their sometimes-unsuccessful attempts to control the unfavorable optics of the situation. Behind it all loomed the Zionist imperative of seizing as much as possible of Palestine, with as few as possible of its indigenous people. In this respect, little has changed in the 53 years after the 1967 war.

June 1967 War | Palestinian Timeline
Highlight - A Watershed in the Arab-Israeli Conflict - In June 1967, the third Arab-Israeli war broke out, at the end of which Israel occupied the Sinai, the Syrian Golan Heights, the Gaza Strip, and the...
www.paljourneys.org/en/timeline
news Image: 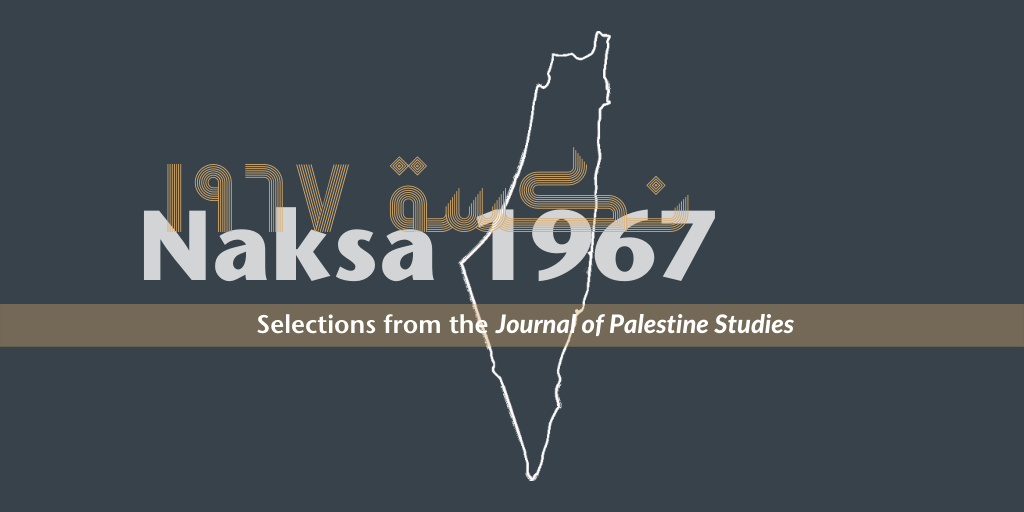